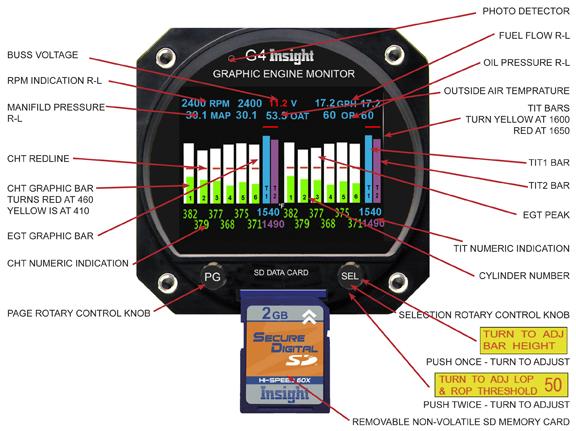 Traditionally, a pilot has had one EGT gauge and one CHT gauge that he or she would use to keep track of the performance of an engine. The aircraft's manufacturer determined the probable location of the hottest running cylinder, placed a single probe there and then screwed an EGT probe into the exhaust pipe a few inches downstream from where the exhaust pipe joined the exhaust manifold. The theory was this: if you lean the engine by reference to what is normally the hottest cylinder and the exhaust temperature, you won't fry any of the cylinders or over-lean the engine.

This cost-saving design from the manufacturer works pretty well for the low compression four-cylinder engines used in the much of the General Aviation fleet—as long as the pilot doesn't aggressively lean the engine while it's developing 75 percent or more power.

But the two-probe approach is not the best idea for higher compression engines or for tightly cowled six-cylinder engines—particularly if the engine has a turbo attached to it. For those engines, you need to monitor all the cylinders in order to avoid long-term problems and to troubleshoot engine problems while aloft.

The state of the art
For dozens of years now, several manufacturers have sold aftermarket kits that accomplish the objective of individual cylinder monitoring, and in my opinion all of them are superior to the dual-probe OEM approach.

What has changed in the past dozen years is the monitoring of additional parameters which offer a much broader assortment of ways to keep track of an engine's health. In some cases, it's also allowed for the introduction of trend monitoring—something heretofore restricted to turboprop engines and pure jets. With this arsenal of data, predicting the engine's future has become less of a black art and more like just another day at the office.

Insight Avionics' "G" line
For several years, Insight Avionics sold a product called the "GEM," an acronym for "Graphic Engine Monitor." Using a plasma display, it provided CHT bar graphs for each cylinder and an EGT bar graph display (plus a Turbine Inlet Temperature (TIT) display if a turbocharger happened to be in place)—all in an instrument that could be mounted in a standard panel cutout.

Now, Insight has upped its game considerably by adopting a patented clean-sheet design approach to replace the venerable GEM line. The resulting "G" line has only a couple things in common with the GEM: it still monitors CHT, EGT and TIT parameters, and it still fits in a standard panel opening (3.125 inches for the G4, or 2.25 inches for the G1, G2 or G3 model). Beyond that, the comparisons become apples and oranges.

The G1 instrument is most like the GEM predecessor but adds probe diagnosis and an SD card for data logging—trend monitoring for the masses, in other words.

The G2 provides instantaneous fuel flow monitoring plus fuel use totalization and adds bus voltage and OAT monitoring. Carb temperature monitoring (to guard against carb icing); rich of peak/lean of peak margin; and, if the engine is fuel injected, fuel injector balance analysis is also provided.

The G4 really piles on the monitored parameters and the G4 Twin doubles your pleasure by watching out for not one but two engines—all in one 3.125-inch instrument.

Other manufacturers provide essentially the same information in their products, but they require considerably more panel space and panel space is usually at a premium nowadays due to the large-format color screens used by MFDs and GPS devices.

One downside is that some of the text portions of the Insight 2.25-inch displays are smaller than the competitor displays; however, since the instrument is normally placed close to the pilot, very near the standard six-pack instrument stack, it's not a deal breaker.

A display primer
Taking a look at the G4 instrument (figure 2, pg xx), an understanding of the depth of data available and execution of the human interface is obvious. Particularly note that the LED graphic display is augmented by text data, and notice how the color changes when a parameter goes off the rails or is about to do so.

Pricing and documentation
The list price of the display units range from $1,235 for the basic G1 to $6,825 for the top-of-the-line G4 twin engine variant. All of the sensors, probes and harnesses are included with a new kit. Only installation is extra.

Insight's website breaks it all down—and also provides downloads of the full documentation so you can review your options before you make your purchase. Having the documentation available helps promote a discussion with your A&P before the installation begins since he or she may be able to clue you in on potential obstacles with your specific aircraft that may affect your total cost.

Once you get the parts and labor all mapped out, you can make an informed decision—but if the total cost seems a bit excessive, consider what it would cost if your engine eats an exhaust valve due to over-leaning, or if a cylinder head cracked due to shock cooling.

Trend monitoring, and the monitoring of virtually all important indicators of engine health is an awesome addition to the pilot's bag of tricks—especially vibration analysis, since a change in the vibration environment created by all those parts in motion is a sure sign of impending trouble.

Fuel use, g force, turbulence and injector balance (or carb temperature display) numbers are icing on the cake—and once the instrument and all of the associated hardware is in place, you'll likely wonder how you ever got along without a full capability engine monitoring system like the Insight G series.

John Loughmiller is a 4,600-hour commercial pilot and CFII MEI-A. He lives in Kentucky with Donna, his wife of 40 years, and often commits random acts of aviation. Send questions or comments to . 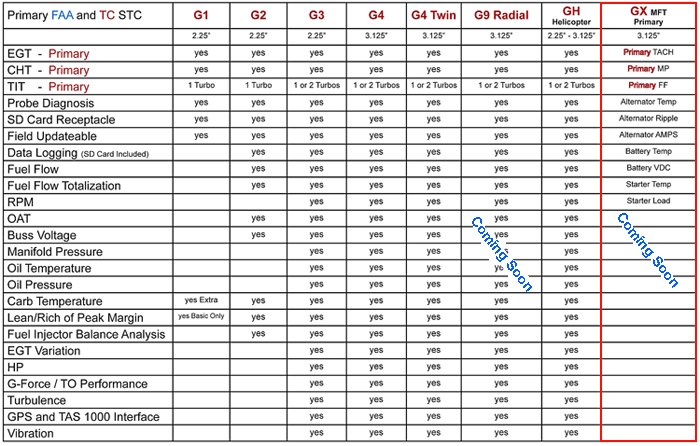