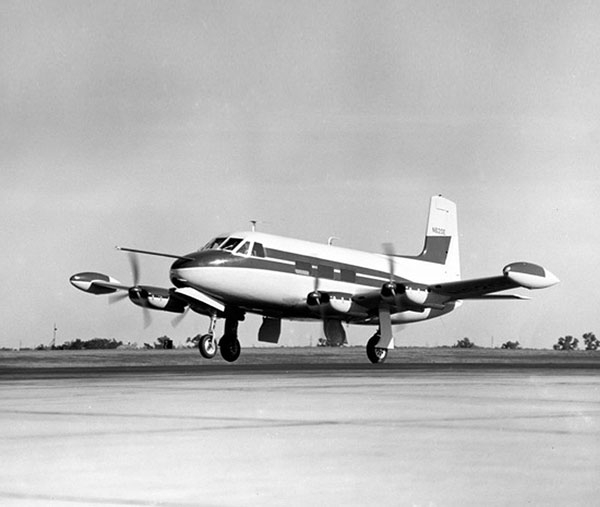 The Cessna 175—and later, the Hawk XP—were created to fill the narrow space between the 172 and 182. (The Hawk XP is featured in this issue of Cessna Flyer on Page 42. —Ed.) Faster and slower, retractable and fixed gear, pressurized and not, twin and single, conventional and tricycle gear, Cessna seemed determined to create an airplane for every mission and pilot profile.

Given the multitude of models in Cessna’s lineup, it’s not entirely surprising that in 1956, Cessna sought to capture another market with the four-engine, pressurized Cessna 620. It was called the 620, because, you see, it was twice as much plane as the 310.

Cessna management thought the time was right to introduce a plane that would provide more convenience for company executives than the airlines, but with more room and capability than the twin-engine aircraft of the day.

However, timing is everything. Cessna was building a business-class piston aircraft just as the age of the business jet was taking hold. In 1957, Lockheed introduced the JetStar and in 1958, the North American Sabreliner was introduced. The highly successful Learjet 23 followed five years later.

Despite Cessna’s heavy investment in promotion—including spending $25,000 to produce a film marketing the 620—the project was canceled.

Don Powell, a Cessna employee who had been hired to recruit engineers for the 620 project, recalls the cancellation: “Every vestige of the 620 was to be abolished. Immediately. I had little plastic slide rules with ‘620’ on them, all kinds of gimmicks that I handed out in places... The story I got was that management was under heavy criticism by the stockholders for spending money on a model that had no chance of making money. So they took the plane, took out the engines and ran a bulldozer over the whole thing.”

Of course, Cessna would go on to produce its own line of business jets. The Cessna Citation families of aircraft comprise the largest business jet fleet in the world today.