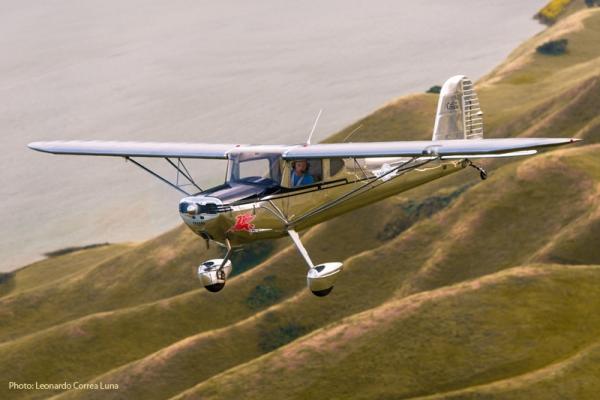 various reasons, past and present.

“We didn’t know what we wanted… a 120? A 140? A Luscombe? A Cub? We just knew it had to have a tailwheel and an electrical system,” explained Josh Cawthra.

In this case, “we” means Josh and his father, Dave, who were seeking to co-own a 1940s-era aircraft.

“We checked Barnstormers after an aircraft we were considering in Southern California fell through,” he continued, “and found this one. We arranged to do a prebuy in Oxnard [Calif.] and a couple of weeks later, took delivery.”

What they received was a rather storied 1947 Cessna 140, serial number 13873. And in the four short years that it’s been in the Cawthra family, between the award-winning restoration work and Josh’s careful research, the beauty and the history of N4151N have come together.

Every plane has a history

“Our family has always been aviation-oriented,” Josh Cawthra explained. Dave ran a charter op before he retired last year from the Salt Lake City FSDO after 26 years of service. Josh is an A&P and an accident investigator who has worked for the NTSB for over a decade.

The plane, Cawthra maintains, wasn’t purchased to be restored. “It was in okay shape when we bought it,” he said. “The maintenance of the polished aluminum finish is work that never ends,” Cawthra continued, “but it was very flyable, and we intended to do just that.”

But this family, when they acquire a plane, tends to keep it for a while. “It’s what we do,” he added.

For example, they have a Piper Cub that’s been in the family since the 1970s. “They earn a special place in your heart,” Cawthra explained.

This plane, however, has a special place in history.

A previous owner of N4151N, John Krueger, had gotten the 140 back into flying condition in 2001. A few years later, Krueger sold N4151N to Scott Sheldon where it remained based at Oxnard, Calif. until Josh and Dave Cawthra purchased it in July of 2012.

“I probably would have never restored it if I wasn’t an A&P,” Cawthra confessed. But because he is, he did.

Between 2012 and 2014, Cawthra extensively restored N4151N while keeping it in flyable condition and logging between 150 and 200 hours every year.

“After we were invited to the Heritage Area at Reno in 2013,” Cawthra recalled, “that’s what sparked the fuse to really restore the plane.

“I sat down with chief judge [at Reno] and found out what they do to judge [an aircraft], and what they look for [in a restoration].”

With lots of time logged at night and on the weekends, and with family and friends helping, Cawthra proceeded to go through most everything on the airframe. This included the removal, inspection and painting of the lift struts and gear legs, and replacement of all of the windows. According to Cawthra, there are many derelict 140s around, and parts are available.

“Fog rolled in for three weeks, so [we] pulled the engine apart and overhauled it,” he explained. Due to the lack of availability of C-85 crankshafts, the aircraft has an STC for an O-200 crankshaft. (For photos of the aircraft during upgrades, take a look at “N4151N: A History of One Amazing Little Airplane” compiled by Josh Cawthra. Email Cessna Flyer and we’ll send you a read-only PDF version of this 32-page document. —Ed.)

Original aluminum wheel pants—an option for the 140 that are extremely hard to find today—were obtained throughout various sources and restored to original condition.

In addition, Cawthra replaced the tailwheel with the original Scott 3-24B; installed a brand-new interior (including seats, door panels, headliner, carpet), instrument bezels, and new interior and exterior paint.

The aircraft was purchased with shoulder harnesses, and Cawthra replaced those with new webbing. The installation of a lightweight starter and alternator and Cleveland brakes allow for increased reliability for N4151N.

“The fabric wings are the only original item that remains from the 2001 restoration,” Cawthra continued. “Those are slated to be recovered sometime in 2016.”

When the wings come off, the Cessna 150-type leading edge landing light installed under a Form 337 will be removed and the original lighting will be reinstalled.

The 140 also has modern avionics—a Garmin SL40 comm radio, PS Engineering intercom and Narco AT 150 transponder—but you wouldn’t necessarily know this when it’s on static display. The original GE radio is used as a faceplate so the aircraft has a 100 percent stock look. 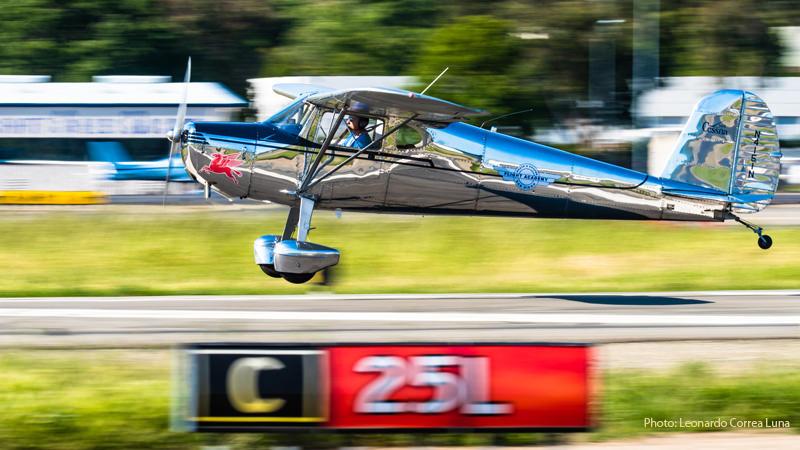 Cawthra has flown from Los Angeles to Seattle and back, multiple times. He generally follows I-5 south from Seattle at 1,500 feet AGL—and much higher than that over any mountainous terrain.

“I’ve learned from investigations and friends, always have a way out with whatever type of flying you do. Having altitude over the mountains sure gives you options with finding a place to set the airplane down if the engine quits,” he said.

Cruise speed in N4151N, Cawthra told me, is “around 105 miles per hour-ish. It just putts along,” he said. He’s even set an (unofficial) record at Reno for the slowest aircraft. (See the sidebar on page 48 for details. —Ed.)

Another thing that Cawthra likes about the 120/140 is that it’s a really honest airplane. “It does what you want it to do,” he explained, “and it really teaches you good habits.

“If you do something wrong, the airplane will tell you,” he explained. After four years and hundreds of flight hours, Cawthra still can’t grease every landing.

“Maybe one in every 10 landings, I’ll get one that is a nice little bounce,” he confessed. “But then again, anyone who owns a spring steel gear Cessna will agree, you’ll make one of three types of landings: those you roll on smoothly; those with a slight bounce; or those that will have you going around and doing it right the next time.”

“After the restoration was complete,” Cawthra said, “I realized, ‘I don’t have the history of this airplane.’” So he set to work, and discovered the aircraft spent most of its life in the San Diego area.

After getting in touch with the San Diego Air and Space Museum, he was allowed access to the archives. “I spent the entire weekend looking through photos,” he explained. “Of 170,000 photos,

I found three [of the aircraft].”

That’s when he realized the aircraft had a history as an air racer.

N4151N was entered in the 1949 Jacqueline Cochran All-Woman Transcontinental Air Race, more commonly known as the Powder Puff Derby, and the museum had the documentation to prove it. The aircraft came in fifth place that year on the San Diego-to-Miami course.

The pilot, Ruth Gamber, and copilot Dorthea Shultz were both former WASPs. “I was all set to take them out of the rest home and take them flying,” he said. Sadly, Gamber passed away in the early 1990s, and Shultz died in 2012.

One very helpful resource on piecing together the history of N4151N has been John Nance. His father, B. Plez Nance, was one of the owners of N4151 when it was part of fleet at the San Diego Flight Academy. “He sent [me] photos of the Flight Academy logo; and [Mobil] Pegasus,” Cawthra explained. (For more about the early years of N4151, see the sidebar on the right. —Ed.)

Josh Cawthra is a supporter of Legends of Flight, a nonprofit group based in Vacaville, Calif., and the Cawthras’ 140 is listed as part of the Legends of Flight collection. Legend of Flight’s mission is to share the history of aviation through education, allocation, preservation and restoration of flying aircraft.

The organization holds a popular monthly fundraiser breakfast at Nut Tree Airport (KVCB) in Vacaville, Calif. on the fourth Saturday of every month from April through October. (See Featured Events on page 10 in this issue. —Ed.) In August 2016, over 25 aircraft flew in with more than 150 people in attendance, so I’d anticipate that if the weather is clear, the last event of this year would be at least as well attended.

Cawthra has also flown EAA Young Eagles. “[The kids] always have fun,” he said, “and if we can spark one kid [to get interested in flying], that makes all the work worth it.”

Aero Fabricators (a division of Wag-Aero)

The crowd that helped put it all together

He also extends his thanks to Kasey, Linda and Jamel from the Auburn Airport Management Group in Auburn, Wash., the Puget Sound Antique Airplane Club, the Washington Pilots’ Association Green River Chapter and the International Cessna 120/140 Owners Association.

In 1948, the two were able to purchase N4151N outright. This Cessna 140 was already part of their fleet of airplanes, which consisted of four Aeronca Champs, an Aeronca Sedan, two Ryan PT-22s and a Taylorcraft. According to John Nance, Plez’s son, the Champs were used for primary instruction (pattern work, landing instruction) while the Taylorcraft and 140 were used primarily for cross-country training.

During the time N4151N was operated at the San Diego Flight Academy (also called Nance and Cooper Flight Academy), the school employed Ruth Gamber to be in charge of the flight dispatch operations.

As word was spreading about the 1949 Jacqueline Cochran All-Woman Transcontinental Air Race (also dubbed the Powder Puff Derby), Nance, Cooper and Gamber decided to enter the race with N4151N. They dressed their 140 with the San Diego Flight Academy logo and Mobil Oil pegasus.

The race flight originated from San Diego, with an ultimate destination of Miami. After numerous fuel stops spanning a few days, Gamber and Shultz arrived in Miami, placing fifth overall in the race of 16 aircraft.

Published in Cessna 120/140
Tagged under
back to top