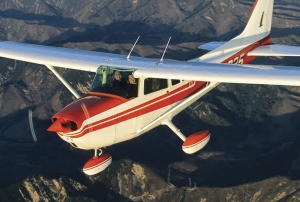 The Cessna 172 is the most successful General Aviation aircraft model of all time. It has weathered the storms of inflation, recession, crushing product liability lawsuits, and dwindling demand.

The 172 was certified Nov. 4, 1955. A premium version called the Skyhawk was first sold alongside the standard 172 in 1961. The Skyhawk came with upgraded avionics and appearance packages.

In 1969, the 172 had been upgraded with larger rear side window. Additionally, the rudder was fitted with a ground-adjustable trim tab at its base. In 1970, “drooping” conical-cambered fiberglass wingtips were added to the K model.

In 1972, tubular-strut landing gear replaced the Wittman sprung-steel type gear. This change increased the footprint of the landing gear by 12 inches. The dorsal fin was lengthened to run the length of the fuselage to a point just behind the rear windows.

With the M model, additional leading edge camber/droop was applied to the wings. This new wing was called the Camber-Lift wing and promised improved low-speed handling characteristics. Tinted skylights in the ceiling were offered as an option.

In 1974, the Skyhawk II trim package was added to the lineup. According to a Cessna marketing brochure from 1975, the Skyhawk II combined “…the businesslike blend of performance, economy and comfort [of the Skyhawk] with the nine most-wanted Skyhawk options.”

In 1976, Cessna stopped marketing the aircraft as the 172 and began exclusively using the Skyhawk designation. The “Skyhawk/100,” as Cessna called it, was introduced for the 1977 model year.

A Cessna dealer sales notebook lists increases in performance nearly across the board for the 1977 172 over the 1976 model.

In 1977, in-flight-adjustable rudder trim was available as an option, and pre-selectable flap control came standard. In 1978, a 28-volt electrical system was installed. In 1979, the flap extension speed was increased to 110 kias.

The 172 continued to roll off the assembly line in the 1980s, until production was halted in 1986 due to unprofitability driven by onerous product liability lawsuits. The passage in 1994 of the General Aviation Revitalization Act (GARA) did indeed revitalize the General Aviation industry. Cessna began producing Skyhawks (and other aircraft) again in 1996. The Skyhawk continues to be produced today.

In fact, as of this writing, the Cessna 172 may be more popular than ever. In an August 30, 2018 report from AOPA about the current hot market for used aircraft, the 172 is mentioned for its recent rapid appreciation (see link below).

“Prices for 40-year-old airplanes do not typically jump 20 percent in the space of a few months, but that’s exactly what’s happened to Cessna Skyhawks produced between 1968 and 1976.”

The report continues, “Rodney Martz, a senior aviation technical specialist in AOPA’s Pilot Information Center, said the recent jump in sale prices for Skyhawks produced in the 1960s and 1970s stands out as the largest percentage increase he has seen in many years, if ever.”