Cessna's Cardinal: A Welcome Addition to Every Cessna Group 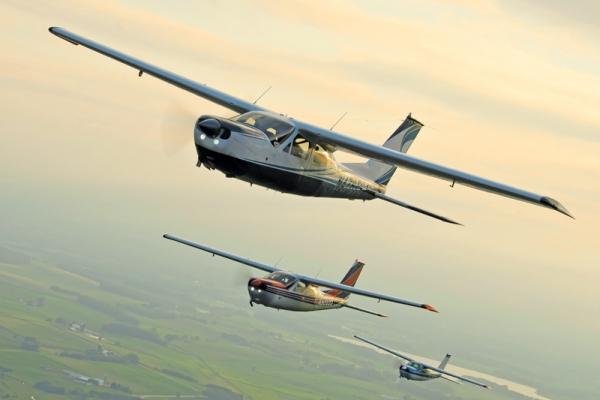 Each year aircraft owner groups gather at predetermined rendezvous points around the Midwest with their aircraft, and in formation each group descends into Wittman Regional Airport (KOSH) for EAA's AirVenture.
Cessnas 2 Oshkosh (C2O) was one of the groups that accomplished a mass arrival at last summer's EAA AirVenture, but its 2014 arrival was very different from years past. For the first time, the group included 18 Cessna 177 Cardinals—14 with retractable gear, and four with fixed gear. The 2014 mass arrival of so many 177s from across the country marked a first-time show of strength for the Cardinal owners.
For many of the participating pilots, AirVenture was their chance to meet up with other Cessna owners, share their fondness for the aircraft type and make new friendships. I caught up with the group in Wisconsin last summer.

A bigger, better idea
In the 1960s the Cessna Aircraft Co. was riding the popularity of its most successful design to date, the Cessna 172. A very forgiving and docile aircraft, the 172 quickly became very popular, especially with current Cessna owners.
But as popular as the 172 was, it did not answer all the needs of the General Aviation population. In 1965 the engineers at Cessna set out to refine the 172 in hopes of replacing the popular airframe with a beefier design. In 1967, Cessna announced its new design and named it the 177 Cardinal.
The Cardinal featured new technologies. It had a cantilever wing with a laminar flow airfoil; a stabilator replaced the standard elevator surfaces on the tail; and, in an effort to improve the pilot's visibility, the wing was mounted farther back on the airframe.
The new wing design and mount allowed engineers to do away with the strut bracing. The use of the stabilator became necessary because the new position of the wing meant the aircraft's center of gravity moved farther forward than on the 172 design, and it provided much improved elevator control authority when the plane was operated at low speeds.
With the popularity of the 150 hp Lycoming O-320-E2D engine already in use on 172 series airframes, the engineers kept with the same powerplant for the 1968 Cardinal.
Buyers of the new Cardinal found the sensitive control responsiveness of the Cardinal to be strikingly different than other high-wing Cessnas. In addition, the 150 hp engine proved to be less than ideal for Cessna's newer airframe.

Revisions and improvements
For the next three years Cessna worked to improve the Cardinal. In "Cardinals Rule," featured in the June 2012 issue of Cessna Flyer, Jennifer Dellenbusch writes: "Cessna [issued] Service Letter SE68-14. Known as the 'Cardinal Rule,' the letter included 23 inspection, installation and modification instructions.
"Modifications included replacing the original stabilator with a unit with leading edge slots to increase landing authority, and installing full counterbalance (11 pounds, versus the original 7 pounds) on the stabilator to help with pilot-induced oscillation. The engine was changed to the more powerful 180 hp O-360-A2F for the 177A model."
The 180 hp 177A arrived in 1969, and in 1970, the 177B was rolled out with an improved wing and a constant-speed propeller. This improved the aircraft's rate of climb and performance.
The third and final change to the Cardinal line came in 1971 with the introduction of the 177RG. The combination of a 200 hp Lycoming IO-360 engine and retractable gear transformed the Cardinal into a sleek and sexy aircraft with performance.
Over 1,500 examples of the 177RG were delivered. But with sales dipping and production costs rising, 1978 saw the last of the Cardinals. Its 10-year production ended with a total of nearly 4,300 airframes built.
Despite its early problems, the Cardinal has enjoyed increased popularity in recent years. Fans of the 177 Cardinal find it a sleek, comfortable, capable, fast and efficient aircraft, and owners of the model seem to be an extremely loyal and close-knit community. It's not uncommon to find owners who have had their Cardinals for 30 to 40 years.

Cessna types set their sights on Oshkosh
Cessnas 2 Oshkosh began in 2006. It was formed by Rodney Swanson, Gil Velez and Craig Chipley to enable Cessna pilots to fly into Oshkosh and camp together for the week of AirVenture each year.
Flying a mass arrival is both challenging and fun; it's a type of flying most GA pilots never have the opportunity to experience. It also adds an additional level of safety for an aircraft's arrival into AirVenture—one that's not available to aircraft flying other arrival routes. (For more on this group and how they execute their arrival, take a look at Dan Pimentel's Affirmative Attitude column published in December 2014. —Ed.)

David Leininger is an aviation photographer from Northern California. His work has been previously featured in Cessna Flyer and in FlyPast, Warbird Digest, Flight Journal and In Flight USA to name a few. He is constantly looking for the next opportunity to create stunning imagery of aviation's legacy. Send questions or comments to .