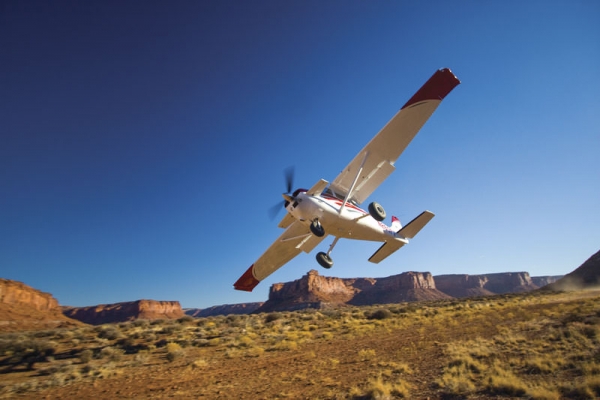 The white Cessna 182 glistened in the bright October sun. As I approached from the rear I noted the landing gear speed kit, and then the nose-mounted canard and three-blade propeller which revealed that this was not your father’s Skylane. The Kenai logo on the tail along with “300 hp fuel injection by Peterson” on the cowling further evinced something special.

Todd’s wife Jo, who is his business partner—and like him, an accomplished aerobatic pilot—graciously granted me the copilot’s seat and relaxed in the back. I settled comfortably into the plush leather. The functional and luxurious cabin environment rekindled my memories. For more than a decade, I’d owned and flown a similar airplane from Peterson’s Performance Plus.

After a brief pulse of the boost pump, Todd brought the IO-550-D engine promptly to life. Multiple avionics displays put on their game faces and we taxied to El Dorado Municipal’s Runway 22. We had KEQA, the quintessential bucolic Kansas airport, to ourselves. Some disinterested cattle grazed placidly in a nearby pasture.

Preflight checks complete, Todd taxied onto 22 while advancing the throttle. The IO-550 was turbine smooth—I could hear it, but could barely feel it. With scarcely enough time to check instruments, we flew off between 35 and 40 kias in little more than 300 feet and accelerated smartly.

Passing through 50 knots just seconds later, Todd lowered the nose to a flat attitude and the Kenai levitated like an express elevator while we entered a steep bank well before midfield.

After retracting flaps, we climbed at well over 1,500 fpm in a surprisingly level attitude—at least 10 knots faster than VY. I briefly felt sharp discomfort in the center of my forehead.

“Todd,” I remarked incredulously, “I’ve had sinus pain before in a 182, but never in a climb!” 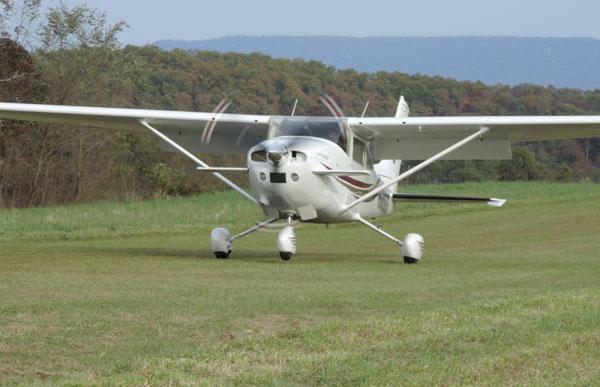 Skylane mods since the 1970s

The Kenai is the latest Cessna 182 modification offered by Peterson’s Performance Plus, Inc. The company’s story began in the late 1970s when the Petersons acquired the STC and tooling for the Wren 460 conversion of the Cessna 182 from the bankrupt original company.

The Wren achieved then-unheard-of STOL capabilities and slow flight maneuverability through use of full-span slotted flaps, moveable spoilers atop the wings (“Wren’s teeth”), and most notably a canard, the aft section of which is a control surface.

However, compared to the stock Skylane, the Wren suffered reduced 172-like cruise speed and payload, and was expensive to produce—compromises that proved too substantial for most owners.

Confronting these issues to ensure the company’s survival, the Petersons certified their 260SE/STOL (“260SE”) conversion through STC in 1987. Customers’ desire for greater speed was addressed through aerodynamic cleanup of the engine cowling and landing gear, along with a more powerful 260 hp fuel-injected IO-470-F engine.

The 260SE utilized the canard but retained the stock Cessna wing. Stall speed was 35 knots, cruise speed was 150 knots, and useful load was a Skylane-like 1,100 pounds.

The new design at once significantly improved the Skylane’s cross-country speed and range, cut runway required by at least half, and markedly enhanced rate of climb, stall resistance and slow speed maneuverability. Over the next 20 years the Petersons produced more than 400 260SE aircraft for customers worldwide. 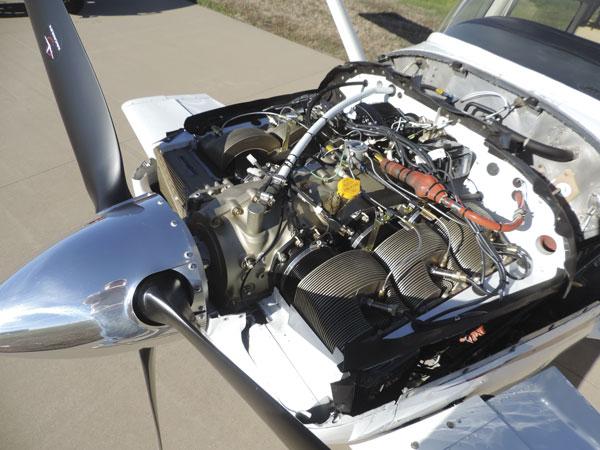 The secret to STOL success

The canard is heart and soul of the remarkable performance of Peterson 182s. Bolted to the engine mount a few inches behind the propeller, its control surface moves in concert with the elevators (seven degrees down to one degree up) in a manner completely transparent to the pilot, providing additional pitch authority and relieving down-loads on the horizontal stabilizer.

The canard has little effect on speed or handling in cruise, but below about 65 knots the benefits become abundantly clear. The stall speed reduction to 35 knots is notable enough, but fails to describe the canard’s complete transformation of the Skylane’s flight characteristics. Loitering flight at 50 to 60 knots in a near-level attitude is a trifle even for inexperienced pilots.

Completely cross-controlled flight in this regime is utterly bereft of surprises, and trimmed, hands-off steep turns at 45 to 50 knots are easily done. The canard not only enables STOL operations but additionally confers responsive, safe handling at slow speeds in a flat attitude. 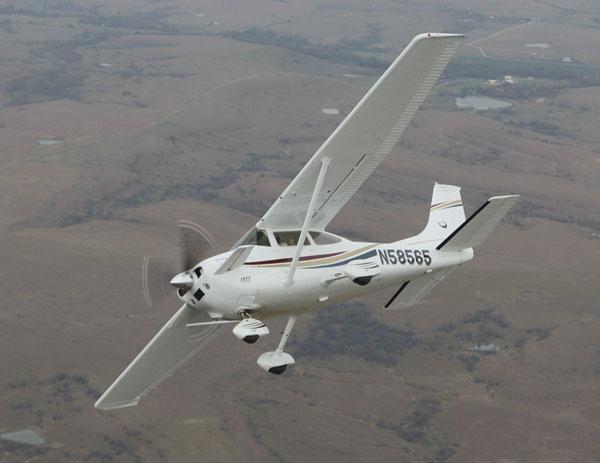 In 2006, perhaps a bit restless after 20 years producing the 260SE/STOL, Todd heeded the call of his Inner Backcountry Pilot and further modified the 260SE to tackle short, rough unimproved strips. He called the new aircraft “Katmai,” evoking the Alaska National Park and Preserve wilderness.

The final touch came in 2010 with certification of the 300 hp IO-550-D. The added horsepower reduced takeoff roll an additional seven percent and boosted rate of climb to at least 1,800 fpm for the newly-christened “King Katmai.”

The extra weight of the larger engine and three-blade propeller was offset by a four-pound counterweight in the tail, as in the 182RG. (The counterweight was part of a Service Kit issued by Cessna for installation with a three-blade propeller. —Ed.) The configuration was embraced enthusiastically by the backcountry pilot community, which snapped up King Katmais as fast as the Petersons could build them.

Still, the earlier success of the 260SE showed that many potential customers had no real desire to land on anything rougher than pavement or well-groomed turf. Rather, they valued the plane’s enhanced climb rate, stall resistance, slow speed safety and STOL capabilities, as well as its superior cross-country talents (i.e., speed and range).

Equipping the 260SE with the IO-550-D—a simple “drag-and-drop” exercise—seemed the next logical step. Todd and Jo thus introduced the Kenai in late 2014 and its performance has more than lived up to expectations.

Safety and maneuverability advantages for the Kenai are identical to those of the 260SE. As with the King Katmai, the extra power confers a nearly 40 percent faster climb rate and proportionately reduces takeoff roll. Cruise speed is enhanced commensurate with the additional power and what may be a somewhat more efficient engine-propeller combination.

When cruising LOP, 152 ktas is cited, burning approximately 13 gph. This latter figure is especially noteworthy: the Kenai’s portfolio of modifications has increased the stock Skylane’s real-world cruise by some 15 knots on the same fuel flow as the less-efficient carbureted O-470. 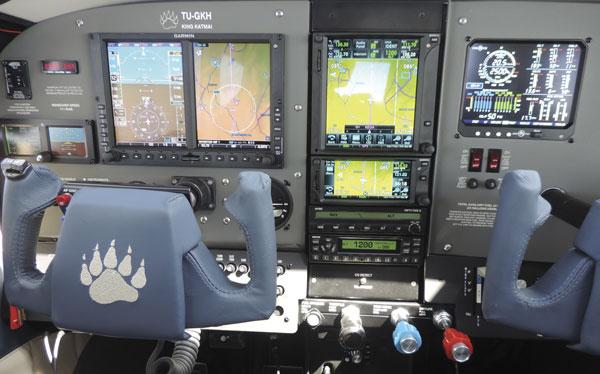 We leveled off at 5,500 feet and set up for ROP cruise. On this day the Kenai was a couple of hundred pounds under MGTOW—despite the fine lunch we had just consumed at the Hutchinson, Kan. airport restaurant—and apparently in an exultant mood, effortlessly accelerating to and holding 159 ktas.

Todd then leaned to 13.5 gph (LOP) and we settled into an easy 152–153 ktas cruise. Only occasional light chop marred an otherwise pristine CAVU flight.

Entranced by the fall landscape passing beneath us and reflecting on my nearly 1,400 hours flying 260SE STOL and Katmai aircraft, I concluded that with the King Katmai and Kenai, the Petersons have now fully realized the potential of the 182 airframe in a way that neither the original manufacturer nor numerous other modifications could achieve.

We descended at the top of the green arc to a crosswind entry for left traffic, Runway 15 at KEQA. On downwind Todd reduced speed to 65 knots with 20 degrees flaps, then controlled descent with power. At 60 to 65 knots, everything happened in slow motion as we descended lazily.

On base I noted the same herd of cattle, pointed to the push-to-talk switch and asked, “May I?”

Todd rolled out on final, then gradually reduced power and applied aft trim to achieve just below 50 knots. With plenty of lift reserve and pitch authority remaining for the roundout and flare, the Kenai alighted well below 40 knots like a butterfly with sore feet and we had to add power to taxi to the midfield turnoff.

Peterson’s Performance Plus turns out a dozen or so airplanes a year, a pace that enables Todd and Jo to enjoy life and occasional flying to social gatherings with owners of their aircraft. The owner community is a very close-knit and loyal group; customers stay in touch with Todd and Jo out of friendship as well as for advice.

Todd suspects that Kenai sales may eventually equal or overtake those of the King Katmai. “The Kenai only uses about 60 feet more runway for takeoff or landing, and its 22 knots higher VNE makes cruise descents a simpler exercise,” he explained. “Install bushwheels on the Kenai and it’s also a very capable backcountry aircraft.”

Indeed, several King Katmai and Kenai owners have both standard gear and bushwheels, swapping one for the other as flying needs dictate.

For more than 30 years the Petersons have enjoyed steady success in both good times and bad. It is often said that if you want to make a million dollars in aviation, you’d better start with at least two million, but Peterson’s Performance Plus is a striking exception.

Todd and Jo Peterson offer a unique, “boutique” product with the performance and high quality that can command a premium price. Cost for Kenai/King Katmai aircraft can range from $200,000 to $480,000, depending on airframe and options/avionics selected. All 1970 to 1980 Cessna 182 (N, P and Q) airframes are eligible for both Kenai and King Katmai conversions.

With a high priority on customer service, and not sales volume—including the willingness to give up a sale if the product won’t meet a customer’s needs—the Petersons found that their customers have become their best advertisement.

Todd and Jo feel that there is little more to do to improve their products, and owners seem to agree. With the Kenai and King Katmai and a sound business philosophy, I judge it likely their success will continue for as long as they wish to build airplanes.

Kevin Moore recently retired from a 30-year career in biotechnology research and development. Moore is a 2,600-hour instrument rated private pilot and has nearly 1,400 hours in 260SE and Katmai aircraft. He spends retired life reading, writing, exercising, consulting, traveling and being a nuisance to his long-suffering wife, Tina. Send questions or comments to . 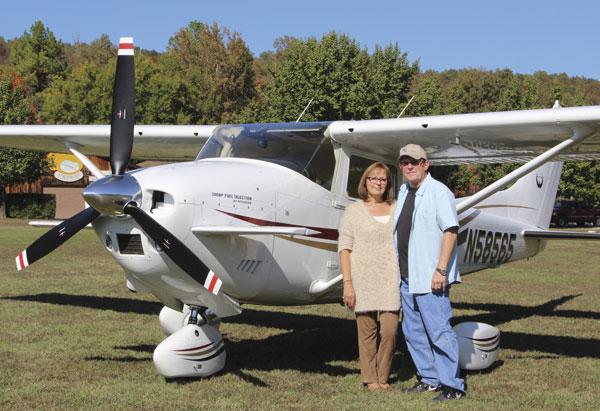