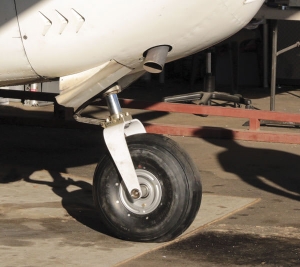 With a successful top-end inspection completed, STEVE ELLS guides a new owner through the first steps to make his Cessna 182 a reliable backcountry plane.

Bill hangars his 1966 Cessna 182J Skylane in the hangar next to mine at the Paso Robles Municipal Airport (KPRB).

Bill is tall, drives a pickup, is comfortably retired—and enjoys flying. He has owned his 182 for four years. It has carried him on cross-country flights to Kansas, Phoenix and San Diego. Since I’ve known him, it seems most of his flights consist of short day-VFR trips to take his wife for lunch.

Last September I saw that Bill’s hangar was open, so I stepped over to catch up. Bill told me that Greg, who was there with him, wanted to buy his airplane.

Bill introduced me as a guy that knew a lot about Cessna 182s. Greg wanted my opinion on the engine in Bill’s airplane, since Bill had told him it had 1,720 hours since its last rebuild. In other words, it was 20 hours past what the manufacturer, Continental Motors, printed as the recommended TBO.

Bill told him that the engine was running fine; it always started right up, made good power, the oil analyses were always clean and that it had been well taken care of. Bill asked me to inspect the engine to determine if it was airworthy. I agreed to take on that task since the protocol is well defined.

In 2016, Continental Motors released Publication M-0, “Maintenance Manual: Standard Practice for Spark Ignition Engines.” This manual is the go-to source for guidance when performing inspections, maintenance and diagnosis on Continental piston aircraft engines. (Make sure you have the most current revision. At press time, the latest iteration is dated July 2017. —Ed.)

I use both a differential compression test with calibrated orifice and a borescope to determine cylinder health as mandated by M-0. Since the guidelines in the M-0 differential compression chapter differ greatly from the guidelines in FAA Advisory Circular AC 43.13-1B, titled “Acceptable Methods, Techniques, and Practices – Aircraft Inspection and Repair,” these tools are essential when conducting the Continental cylinder testing.

I used a VA-400 rigid USB borescope from Oasis Scientific to inspect the valves in accordance with the M-0 protocol. This borescope connects to my laptop which allows me to create a file for storing photographs of everything I see during the inspection.

I performed the inspections of the cylinders in accordance with the chapter and found the compression readings acceptable at 72, 70, 72, 70, 68 and 72/80. A thorough “scoping” inside each cylinder showed no scoring on the cylinder walls, normal lead deposits on the piston crowns and no indication of any valve problems.

In addition to the cylinder inspection chapter, M-0 also provides guidelines for determining if there are excessive combustion gases escaping past the rings. The test procedures are in Chapter 8-9.1. Bill’s engine also passed this test.

Based on these tests, I concluded that the top end of the 230 hp O-470-R engine in Bill’s airplane was airworthy. Within a week, Greg and Bill had agreed on a price and the airplane (and the hangar) changed hands.

Greg owns a contracting business on the central coast of California. His business is thriving, and he works hard. When he can get away, he enjoys spending time at his cabin high up in the Monache Meadows Wildlife Area in the Sierra Nevada.

He told me he yearned to get his family, including his 92-year-old mother, up to the cabin often but hasn’t been able to because of the nearly seven-hour drive to get there. Greg figures a flight in his 182 will take no more than 90 minutes. There’s just one catch: the only landing strip is a gravel/sand runway on the edge of a dry lake at 8,000 feet msl.

I asked Greg why he bought Bill’s 182. Here’s what he said: “Lots of things. The two doors allow me to have my 92-year-old mother go along—it would be too difficult to hop over her in a Piper Warrior/Cherokee.”

“The 182 has horsepower to deal with high altitude better,” he continued. “The 182 is wider and carries a larger payload; my family are all tall and large people.”

“The high wings allow me to clear tall brush on the side of runways: Lone Pine (O26, located 40 miles south of Bishop) was scary with the Warrior I used to own.”

Greg put in a great deal of thought and flight time preparing to fly in to O26 this summer after the snow melts. Within a few weeks after the sale, he had flown to the east side of the Sierra and hired Geoff Pope, a CFI based at the Bishop, California airport (KBIH) for mountain flying instruction. He also took his 182 to the Big Bear City Airport (L35) to learn how it handles doing touch-and-goes at 6,732 feet msl.

During our initial conversations, I suggested that Greg set aside some cash to install a bigger nose tire since his 1966 182 didn’t come from the factory with the left and right firewall reinforcing channels.

These channels, which reduce the odds of bending the firewall, can be retrofitted to all 1962 through 1970 aircraft by incorporating Cessna service kit SK182-44C in accordance with single engine service letter SE71-5. The kit had not been installed on Greg’s airplane. Cessna installed the channels at the factory beginning in early 1970 with Serial No. 182 60291. (For more information on firewall reinforcement, see Steve’s Q&A column in the January 2018 issue of Cessna Flyer. —Ed.)

I told Greg that his 182J was a good airplane and that it could safely operate out of the strip by his cabin if he factored in variables such as winds aloft, density altitude, weight and balance and was prudent about risk management.

We decided that the most immediate step in converting his 182 for safely flying into high-altitude unimproved strips like the one near his cabin was to install bigger tires. 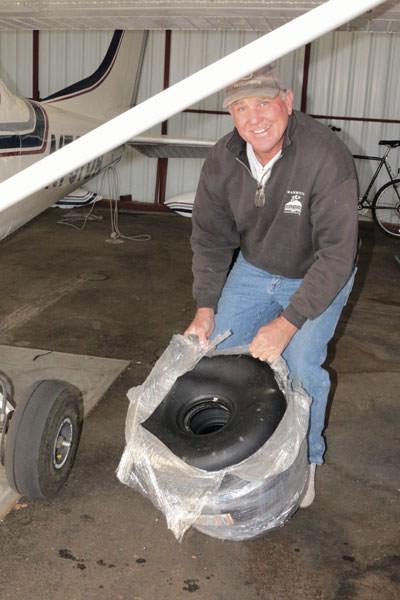 The standard sized nose tire for 182s like Greg’s is a 5.00-5 tire with a 6-ply rating. During my search for bigger tire solutions, I found that the Cessna parts manual does show the parts for what’s called a Heavy-Duty Nose Gear installation for a 6.00-6 tire, but it requires a different hub and nosegear barrel assembly.

During Greg’s research, an acquaintance suggested that a Cessna 310 nosegear strut and fork would work.

Due to the time and expense of searching out parts and approval for the installation of surplus or salvage parts, we decided to seek the advice of Jim Hammer at Airglas Engineering in Anchorage, Alaska.

Airglas sells an STC-approved large nosegear fork that can be installed on all existing nose landing gear barrels. Large nose forks are available for Cessna singles from the 150 through the 207 and for Piper singles including PA-28-140 through -235, and PA-32-260 and -300. The kit includes the large fork, a new axle and a new strut block.

Greg and I liked what we heard from Airglas and placed an order with Hitchcock Aviation in Star, Idaho. They assembled all the needed hardware, STCs and installation instructions before shipping the package to Greg.

Jesse Bennett, a local A&P, removed the front strut assembly and disassembled it. A machinist cut the strut tube in accordance with the Airglas instructions and installed the mounting block on the strut. Next, the fork was bolted on and an 8.00-6 6-ply tire and new tube were mounted on a new Cleveland 40-75D wheel assembly. The nosegear strut was reassembled and serviced.

That took care of increasing the footprint of the nose tire. What about the mains? 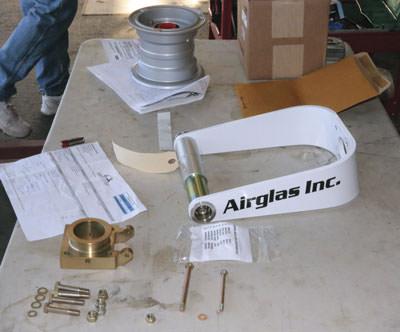 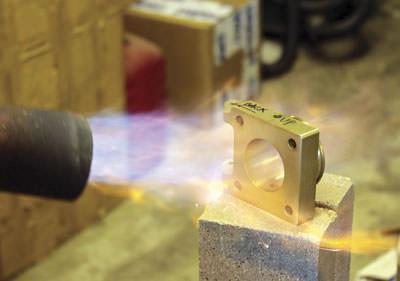 Working on the mains

Greg bought 8.50-6 tires and new tubes for the main landing gear. Parts and approval costs totaled just under $6,000. The strut modification, the installation of the new larger brakes, the block and fork, and the new tires and tubes all happened over the course of one day with hours to spare.

The new landing gear parts add about 25 pounds to Greg’s aircraft empty weight. The bigger tires and beefier gear also increase drag—so he won’t see the normal 135-knot cruise speeds. But he will be spending more weekends with his family in the mountains; not a bad exchange.

The larger tires provide around 4 more inches of ground clearance and a larger tire footprint. The increased “float” of the larger nose tire drastically reduces the odds of nosegear (and firewall) damage due to uneven runway surfaces.

After May, when all the snow has melted and the “runway” has dried out, I expect to see Greg gently settling his mother into the copilot seat of his “mountain goat” 182. Next stop: a cabin high up in the Sierras.

Greg bought an airplane that fit his mission’s needs—and then modified it to increase utility and safety. As a result, he can continue to devote the time needed to care for his contracting customers and spend more “cabin” time with his family. Isn’t that what airplanes are for? 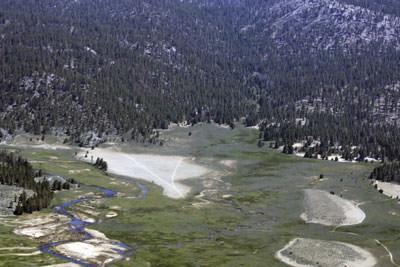