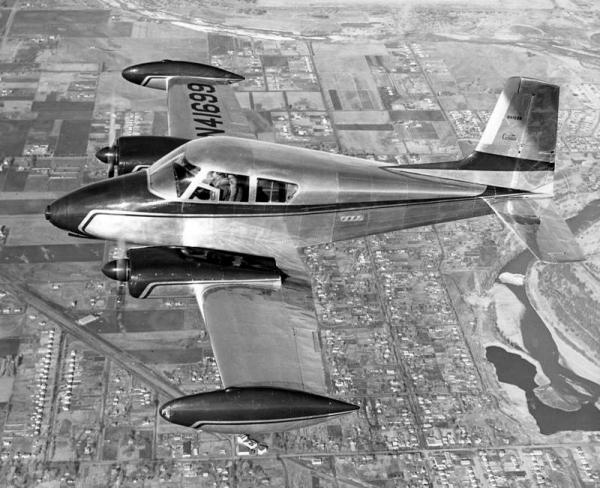 In addition to its growing line of single-engine aircraft, Cessna realized that to compete in the postwar market it needed a twin-engine model. The company briefly considered buying Ted Smith’s Commander design but, according to Daryl Murphy “…it had a heavy and complex structure that would require an extraordinary amount of fabrication and assembly time. Cessna was a company that required assembly line efficiencies, so they realized they would have to start from scratch.”

Designers got to work on the new airframe in 1951. Specifications for the design included a rather daunting list of items: it had to fit in a 40 x 28-foot T-hangar, have good handling characteristics, operate from almost any airfield, carry five people and cruise in the high hundreds.

Daryl Murphy gives us some additional insight into design factors for the 310: “Engineers decided on the tried-and-true 23012 airfoil with both chord and thickness tapering to 23015 outboard of the nacelles and to a 23009 configuration at the tips.

“Since it would be a low-wing retractable-gear design, the stowed gear would consume most of the space in the inboard wing, and fuel would have to be located outboard of the engine nacelles. With a proposed wingspan of 36-37 feet, there was not enough room to hold the proposed fuel load there, so they borrowed an idea from contemporary jet fighters and designed torpedo-shaped tiptanks that would become the unique feature of the 310 and other future Cessna twins.

“The 50-gallon tanks had the added benefit of putting flammable fuel as far as possible from the cabin.”

Three Years in the Making

After working through these and other considerations, Type Certificate No. 3A10 was issued on March 22, 1954, for the 310. It was certified with either the Continental O-470-B or O-479M engines, Hartzell propellers, and a fuel capacity of 102 gallons—51 in each tiptank. It debuted with a base price of $49,950.

The 310 was manufactured over a course of 26 years and proved to be a fast and reliable airplane that has a loyal following even today.

L-27A: United States military designation for the 310A, later changed to U-3A.

“Out of the Clear Blue of the Western Sky Comes…. Sky King!”

These words opened episodes of the popular TV program “Sky King.” The show featured the adventures of Schuyler “Sky” King, owner of the Flying Crown Ranch and a pilot who used his twin-engine Cessna—nicknamed “Songbird”—to catch bad guys and evildoers. He’s aided by his niece Penny, who is also a pilot.

The first plane featured on the show was a Cessna T-50 Bamboo Bomber. Sky King aficionado Rick Plummer lists three different year models of the T-50 over the course of the show.

Starting with the 1957 season, Sky King took to the air in a Cessna 310B—and apparently used that model for the duration of the show which ended in 1959.

The show undoubtedly sparked an interest in aviation for the many young men and women who watched.