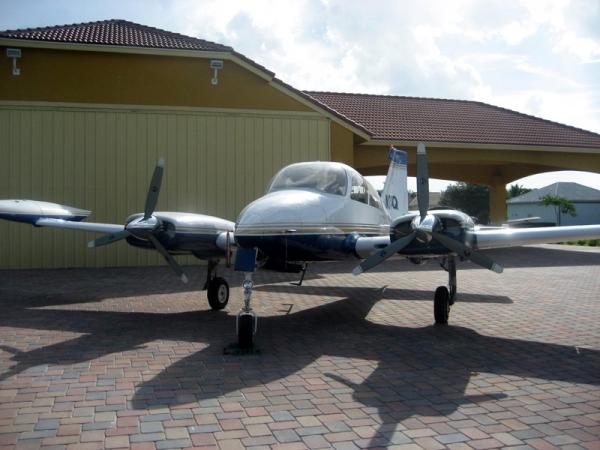 September 2014- Dwane Wallace and his team created the first Cessna 310 in the mid-1950s. The airplane featured an airframe profile which was, and still is, unique. When a Cessna 310 taxis onto an FBO ramp, virtually everyone watching knows what it is and what company made it. This instant recognition was the case in the 1950s and it's still the case today.

Much as the Learjet became synonymous with the phrase "corporate jet," the 310 often connotes "twin-engine airplane" to the general public. And even today, whenever there are two people staring at a 310 for the first time, inevitably one will turn to the other and say something like, "Even sittin' still, that thing looks like it's goin' fast!"

By the time production ended in 1980, over 5,700 310s had been manufactured. The airplane is still an icon; it's a light twin that's a fast, desirable cross-country machine with a large number of devoted owners and operators.

For a time, his 310 Riley Rockets were considered the ultimate answer for seekers of pure speed and rate of climb. Riley and his engineers also perfected the Rajay turbocharger and went on to create Riley Rocket variants for a host of Cessna twins. Eventually Riley's company ceased to exist, but not before it was granted STCs by the FAA.

Colemill Enterprises' 310 STCs
Enter Colemill Engineering, a Nashville, Tenn.-based aeronautical engineering company that developed performance enhancing STCs for a whole host of airplanes including Beech Barons, Piper Navajos and the ubiquitous Cessna 310.
In 1968, Colemill's first 310 STC was aimed at the G through Q models. Called the Executive 600, the STC replaced the stock engines with Continental IO-550 powerhouses which increased speed to an honest 200 kias.
It also raised the single engine service ceiling to 10,000 feet, increased the single engine climb rate to 400 fpm, and decreased the noise level inside the airplane. TBO went from 1,400 hours to 1,700 hours, and the replacement engines featured a heavy case and additional cylinder hold downs intended to reduce the cylinder cracking problems that had plagued the older engines.

In late 1987, Colemill created a second 310 STC, the Bearcat I and II conversion. This STC—for the 310R, T310P, T310Q and T310R—replaced troublesome stock engines with the "A" model of the Continental IO-550 which increased horsepower to 300 ponies like the earlier STC.

After the mod, the aircraft could climb at 1,900 fpm, cruise at 196 kias and the single engine climb rate became 450 fpm. As with the Executive 600 STC, the TBO for the engines increased to 1,700 hours. For the T model 310s, the STC eliminated the entire turbo system (and thus the problems many operators reported); it also ended the required compliance with an exhaust system AD.

Colemill Enterprises fell upon hard times, and finally, after a disastrous flood submerged the plant under 14 feet of water, the company went out of business. With its demise, these STCs effectively ceased to exist.

Mike Jones Aircraft Sales
On Nov. 4, 2010, Mike Jones Aircraft Sales, a Murfreesboro, Tenn. company, purchased all 21 STCs from the defunct Colemill operation and set about re-establishing the performance product aftermarket earlier dominated Riley and Colemill.
Jones' idea for the Cessna 310 was to take the old Colemill STCs and offer either the Executive 600 or Bearcat I and II to 310 owners, or to offer them their choice of the two mods along with interior and exterior refurbishments.
After Jones acquired the Colemill STCs, he revamped and improved them quite a bit. For the Executive 600, for instance, Jones lists the modifications as follows: factory remanufactured Continental IO-550-E 300 hp 1,900 hour TBO engines; belt-driven alternators; new three-bladed McCauley threadless hub propellers; McCauley governors and Ram synchrophasers; Shadin digital fuel computers; vacuum pumps; starters; Lord mounts; fuel and oil hoses.

Beyond performance enhancing STCs, 310 owners can also ask Jones to improve their pride and joy in several other areas. New paint and interiors are offered, and instrument panel overhauls—utilizing Jones' CNC milling machine to create a totally new panel—are also popular. Jones also has an in-house avionics shop that can remove aging 400 series radios and autopilot and replace them with state-of-the-art devices.

Attention to detail is complete, including the creation of a totally rebuilt and renovated throttle quadrant and a better-than-new fuel tank selector panel, if desired.

For the 310 owner, it's possible to refurbish the airplane and greatly enhance its performance, too. With the availability of Colemill's old STCs at Mike Jones Aircraft, it's as if Colemill is in business again, a mere 50 miles east of where it existed for so many years.
Jones has taken the Colemill performance STC to a higher level. Plus, he's offering 310 owners a way to return their treasured airplanes to their original beauty, and well beyond.

John Loughmiller is a 4,700-hour commercial pilot and CFII MEI-A. He lives in Kentucky with Donna, his wife of 40 years, and often commits random acts of aviation. Send questions or comments to .