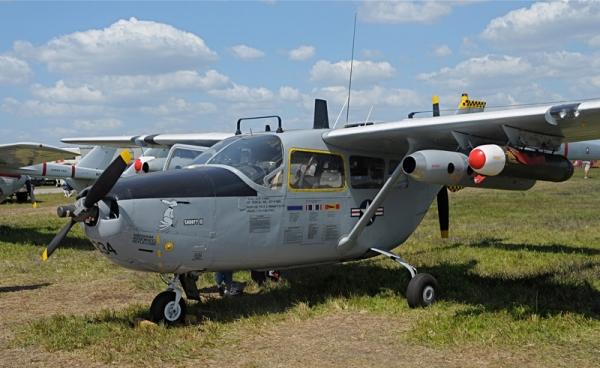 When Cessna introduced its "revolutionary" tandem twin 336 Skymaster in 1963, it thought it had a real hit on its hands. After all, with centerline thrust and twin tail booms, the Skymaster promised to be everything a standard light twin wasn't—namely, much easier and safer to fly on one engine. A promise the Skymaster continues to keep.

Then in late 1964, Cessna Aircraft went a step further and introduced the 337 Super Skymaster with more powerful engines and retractable gear. The pressurized and turbocharged P337 came on the scene in the 1973 model year.

Yet, even with all it offered, the flying public gave the Skymaster "no respect."

I, for one, am a proud member of SLA, Skymaster Lovers Anonymous. We're a small but steadfast undercover group who know and love the venerable "Mixmaster" for what she is: a hell of a good airplane.

Okay, so there is no SLA. But if there were, I'm betting that Bill Crews, owner of Skymaster Center, Inc., would be its president. This guy knows Skymasters. He's been flying, buying and selling them since 1980 and has over 5,000 hours in the left seat.

"My dad was a minister and he flew so he could visit his different groups and attend conferences. He had all the singles, and one day he bought a 1973 pressurized Skymaster. That was the end of the story," Crews said. "He stayed with that airplane and loved it. I still own that one."

Crews continued, "When I was in college, [my dad] started buying and selling Skymasters as sort of a hobby. We'd have two or three of them just to play 'jump-and-flip.' I thought it was a great idea, so when I graduated I started doing it, too—and we've just had a blast with it."

To fly them is to love them
For some reason, many pilots really cling to urban legends when it comes to the Skymaster. Take the one about pilots attempting to take off with the rear engine inoperative.

"That's the biggest crock," Crews said. "If you can't tell you've lost 50 percent of your power during your takeoff roll—just look at your fuel flow—you don't need to be flying. Just because pilots can't see the engine and prop they think that makes a difference."

"I think one of the best things about [a Skymaster] is the centerline thrust. With no VMC or asymmetrical thrust problems, an engine-out is just like flying any big single," he said.

"Yes, I've lost them on takeoff by myself—and I just go around and land. I've lost them 300 miles from home—and just continued my trip. I'd say they were idiot-proof, but..."

"I came out of Cal Black Memorial Airport (U96) on Labor Day in 2012, flying a turbo Skymaster with brand-new engines and props. Nice airplane," he recalls. "It was 109 degrees and as soon as I turned crosswind and started climbing out, the rear engine just quit cold.

"I fiddled with it for about five seconds and decided it wasn't going to start again—I feathered the prop and just came around and landed," Lillie said. "My Skymaster went from a light twin to a heavy turbocharged single.

"I didn't get shook up or anything. After I got thinking about it, though, it came to me that if I was in a Seneca or other regular twin, I don't know if I'd be here to talk about it today.

"That made a believer out of me. I'd always been a fan of Skymasters; I love them. The performance I get for my type of flying is phenomenal," he said. "I do use it for business, but mostly for personal flying. I fly it back and forth from Salt Lake City to Lake Powell in the summer and I have a sport fishing boat up in British Columbia, so I fly up there a few times a year."

Lillie explained that the terrain he flies over can vary from desolate to downright hostile. "I had a nice Turbo 210, but I just got to a place in my life where I wanted the safety of a twin—but a safe twin," he said. "The Skymaster gives me that safety with no adverse qualities."

In fact, single engine performance isn't the only thing Lillie really likes about the Skymaster. "The qualities the Skymaster gives me are pretty much unsurpassed. I'm a pretty value-oriented guy and I'm telling you that there isn't anything else in the air that gives you as much airplane and as many capabilities for the dollars spent," he said.

"Where else can you get a turbocharged, pressurized, fully equipped twin for under $100,000? I'd like to see it."

Lillie's current Skymaster—his fifth, remember—is a 1973 pressurized model. And when he bought it he put it in the hangar and pretty much took it right down to the airframe. His refurb included new soundproofing, thicker cabin windows and a very soft, fine-grain Ultraleather interior.

While his airplane is a showstopper, his choices in avionics are rather pedestrian in today's all-glass world. Lillie stuck with the King radios and Cessna autopilot the airplane already had.

"I tend to steer away from the high-dollar, Garmin-type stuff. I just don't need it—and you don't get your money back when it's time to sell," he said. "This type of panel is much more valuable to me."

Lillie does, however, have a new True Flight EFIS unit mounted on each of the Skymaster's yokes. "It's great. It has the approach plate overlays and Highway in the Sky; 3-D NAV—it's perfect for my type of flying," he said. "I don't really fly much heavy IFR. That's too dangerous around the mountains."

So we have to ask, since Skymaster Number Five is such a hit, does Lillie see a Number Six in his future?

"You bet! Maybe a seventh and an eighth," he said. "I love this airplane. I've had others, but always come back. There's nothing that can beat it."

Bill Dillard, Rocket Man...
Bill Dillard, president of WWD Partners, Ltd., is another multi-Skymaster owner. "I've owned bunches of airplanes over the years. I partnered with a guy in a P model [pressurized] Skymaster in 1985. I really only flew it about 50 hours or so, but I really liked it," he said.

"I look at Skymaster owners the way I look at Volvo or Saab owners—we're a different breed. We like them and continue to buy and sell them. Either you like this airplane for whatever reason, or you don't. I really like it."

Like so many other Skymaster owners, Dillard would buy an airplane, fix it up and then sell it. "My wife says it's my disease. I don't play golf or bass fish; my hobby is turning airplanes," he explained.

"I've always come back to Skymasters. I sold my 414 and bought my fourth Skymaster and really fixed it up. It was beautiful. I flew it for two months when a watermelon farmer in Mexico saw it and had to have it. He offered me a great price, so I sold it to him.

"I had other airplanes, then I came across this one—four Bravo Victor—it's a Rocket II conversion. It was done and ready to go. I really didn't have the time to buy one and redo it myself and this one has everything," Dillard said. "Matt Kozub and his guys spent a lot of time and money making this one just perfect."

Kozub's company, Aircraft Sales, Inc., actually specializes in taking 1970s and newer aircraft and totally refurbishing them to better-than-new condition. A Rocket II is what comes out of their shop after they've worked their magic on a Skymaster.

"It's a total refurbishment of the aircraft and its systems," Kozub explained. "Paint, interior, engines, props, avionics, new glass, new panels—we go through everything from front to back. When it leaves our shop, it's the best of its type you can buy."

"We've done five or six Skymasters so far. Four BV was the first Rocket II we did—it has all the Riley STC conversions," Kozub said. "We have a nonpressurized 337 in the shop now that we're refurbing for its owner. He's not going for the full Rocket II treatment, but he's installing a lot of the performance upgrades including Garmin G500 glass and the GTN touch screen radios. It's really nice."

Bill Dillard said that in the six years he's had his Rocket II, it's been a wonderful airplane.
"It's rock-solid stable. It has the winglets and cuffs. I wasn't sold on the benefits of the winglets—the Skymaster is already a very solid airplane—but it had them, so.... anyway, after flying with them for a while, they make a stable airplane even better in every situation, I've found," Dillard explained.

As for flying the Rocket II, Dillard said it fits his current needs very well. Especially its high-altitude capabilities. "I fly up to Aspen to ski with friends and this airplane has a solid 18,000-foot single engine service ceiling. I've taken it up there and shut an engine down just to see how it performs. It is amazing," he said. "It still climbs and flies really well up there."

"This is a true mountain airplane," Dillard added. "With most other twins you may get seven-, eight- or nine-thousand-foot single engine service ceiling. That doesn't cut it in Colorado. That's probably one of the best features of this airplane. It will really fly on one engine."

Looking for love?
So if you think you may be catching the Skymaster buyer's bug, Crews said there are a few things he tells first-timers to look for.

"You want to make sure it's been kept up. If you try and play catch-up with the P model it can be very costly. Also, the 1973 through '80 models are what everybody wants; they all came with the airstair door. That's a big feature," he said. "Also, they went from four fuel tanks to two—so there's no fuel management issues with those models."

Crews said that in his 24-plus years and over 5,000 hours in type, he still thinks the Skymaster is the perfect airplane for pilots transitioning up from singles. "If you're going from a 182 or 210, the Skymaster is a piece of cake.

"You can still get the CTL [centerline thrust] rating as far as I know, so insurance is much easier to get," he said. "The pressurized models are understandably harder to get insurance for low-time pilots." (Cessna Flyer contacted a couple flight instructors and the FAA to get clarification on the availability of the CTL rating with no clear answers. If you are thinking of getting a Skymaster, check with your local FSDO for its stance on issuing you a CTL. —Ed.)

Crews said his only other tip is to know your maintainers. "It's relatively easy to find a mechanic that has some experience on Skymasters, so look around," he said. "They're comparable to a 310 or a Seneca with regard to overall maintenance costs. The P models are like the 340—more systems to maintain. It's not an inexpensive airplane to own or operate, but if you love it like so many owners do, it's worth it."

So what about Crews' personal favorite, the fixed-gear 336? "The fixed gear is very, very rare. The 336 takes odd to another level altogether," he said. "But some special people really want them. They want a twin without having to deal with retractable gear just to gain 20 knots."

Taking odd to another level? The Skymaster 336 has "me" written all over it.

Dale Smith has been an aviation journalist for 30 years. When he's not writing aviation articles, Smith does commission aircraft illustrations specializing in seaplanes and flying boats. Smith has been a licensed pilot since 1974 and has flown 35 different types of General Aviation, business and World War II vintage aircraft. Send questions or comments to .