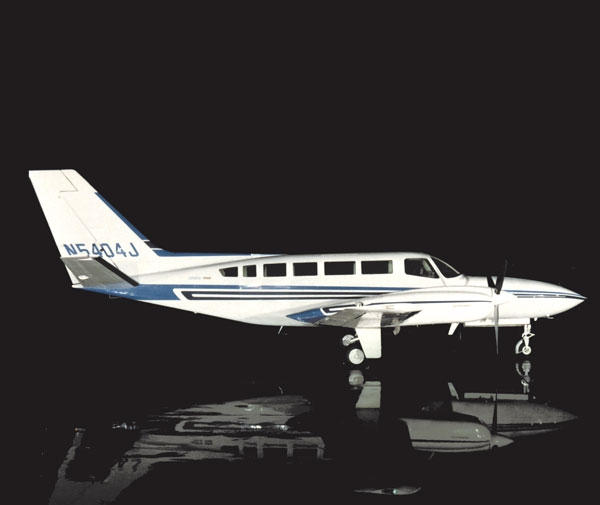 “There are no comparable models in the late model piston cabin-class aircraft,” said Ron Caruso, founder of Maine Aviation Sales, Inc. in Portland, Maine. “This aircraft literally has no competition in its class.”

Caruso should know. He’s been maintaining 404s since they debuted, and has been selling 404s along with 402s and other corporate and commercial aircraft since 1981.

This family-run business owns two 404s and three 402s, and all six of the staff are enthusiastic about the solid design and exceptional utility of the incomparable 404. 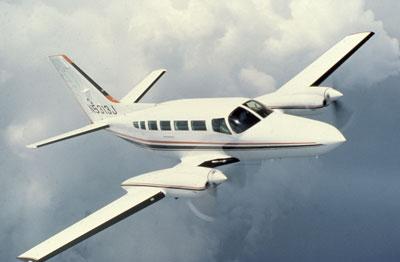 In 1973, Cessna executives began discussing an aircraft with a higher payload than the popular 402, and thus began the development of an unpressurized piston twin that was to become the 404.

The aircraft is clearly an outgrowth of the Model 402B, but with noteworthy differences. The biggest of these is its useful load: at just under or just over 3,000 pounds (depending on type), the 404 is 30 percent greater in ton-mpg than its predecessor.

Engineers also improved the low-speed stall characteristics for the 404 and gave it a smooth bonded metal three-piece wet wing as a standard feature. “Some [aircraft] attach outboard; this aircraft is attached engine-to-engine at the center section of the wing,” Caruso said. This design is structurally sound and incredibly strong.

They pirated some features from the by-then-proven Model 421, too, including the nosegear. However, engineers gave the 404 a brand-new trailing link main landing gear (only minimal rigging is required) and large four-piece semi-Fowler flaps.

The 404’s flaps, landing gear and wet wing would all be used on future Cessna aircraft including Citations. This stable airplane received a vertical tail that spans 7.6 feet, and the rudder trim tab has 4:1 servo.

The Titan was fitted with two 375 hp GTSIO-520-M engines, with no intercooler or cowl flaps. Its fuselage forward of the cockpit is almost identical to the Cessna 402, and the hydraulic system is based on the 402C. The process from testing to certification was relatively quick. The prototype Cessna 404, N5404J, began flight testing in early 1975 and Type Certificate A25CE was issued in July of the following year. First deliveries of this business/commuter/cargo aircraft were in October of 1976.

Cessna initially offered two models of what was at the time its largest piston twin: the 10-passenger Titan Ambassador, and a cargo/passenger version called the Titan Courier.

By the early 1980s, a third model, the Titan Freighter, was also on the market. The Freighter was a reinforced cargo-only version of the 404.

With the Titan offering such a substantial payload increase over the 402, the aircraft was ideal for air cargo and air taxi markets—just as Cessna had suspected. Between October 1976 and January 1977, 17 were delivered.

With a ceiling of 26,000 feet and a range of more than 1,000 miles, the unpressurized 404 can fly both high and far—as long as you don’t mind wearing an oxygen mask. And it can fly in icing conditions.

“This is an excellent Known Ice aircraft,” said Caruso. “It can be dispatched into the same conditions as a Boing 737.”

Fuel capacity is 348 gallons, with 340 usable on the two mains. There are no wing locker tanks. Maximum takeoff weight for the 404 is set at 8,400 pounds, while its maximum landing weight is 8,100 pounds.

The aircraft can carry 700 pounds more than its closest competitor, the Piper Navajo Chieftain—and quite a bit farther, too.

You’d better believe this comparison with the Chieftain was a major selling point in the Cessna marketing materials from the early 1980s. 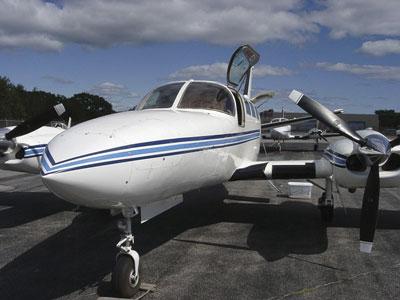 For takeoff, the flap configuration is 10 degrees (inboard) and eight degrees (outboard). The maximum deflection of the inboard flaps is 35 degrees, with 23 the maximum for the outboard deflection.

“The 404 has small throttle movements like a turboprop,” Caruso said. “We have certain training on the engines that we pass on to our customers and buyers. The engines run real nice, if they’re set up properly.”

If needed, the 404’s hydraulically-actuated landing gear can be extended in flight up to 182 knots, and the aircraft does have an emergency gear extension blowdown bottle with 1,700 psi.

Finally, the Titan, despite its name, is not very demanding on the runway. According to Caruso, the plane has great short-field performance. “It can operate out of 2,500-foot strips,” Caruso said. 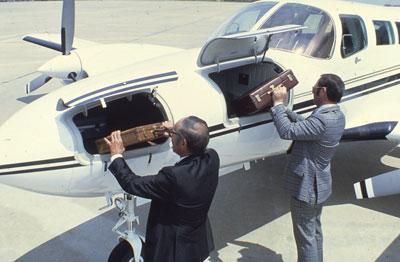 The typical seller of the 404 has used the aircraft either for a charter or a freighter, according to Caruso. Sellers can be either corporate or personal flyers. “The average buyer,” he continued, “is looking at the 404 because of its cost of operation/range payload,” Caruso reported.

But not all buyers are corporate and charter ops. One other important—and perhaps unexpected—use of a 404 is for surveillance and photography. With such good flying characteristics, Known Ice capability and a strong airframe, the 404 has a niche.

The plane is also starting to pop up for private individuals’ use. “A 404 can fly to its destination and have enough fuel on board to return home. It hauls the most fuel of the piston-powered twins,” Caruso explained.

“This airplane makes a great charter, or a personal large-family aircraft—at a lot of cost per hour savings over a turboprop,” he said. “We’ve flown our family to Key West, Fla. from Portland, Maine—nonstop,” he added.

“Compared to a C-90 King air, the 404 is one-third the cost to operate—and it’ll haul more. Yes, it’s a little slower—bring lunch and dessert—however, maintenance cost is about half. It’s a good alternative.” 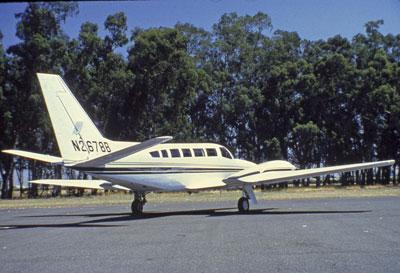 “Also, serial number [of a 404] does not guarantee a better aircraft. A plane’s history, including its usage, maintenance and where it has been operated is much more important.”

The typical 404 will likely have older radios and avionics. Many Titans were owned by government entities and are on the market as basically stock aircraft with an average 10,000 to 20,000 hours TTAF.

A popular modification on the 404 is a camera hole installation for use in aerial surveys. Maine Aviation Sales holds the STC, which meets most countries’ certification requirements. 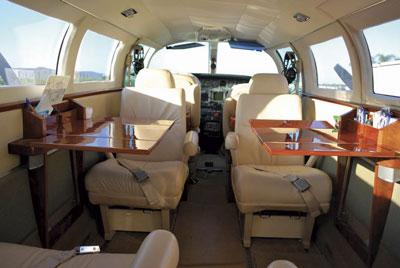 The 404 definitely isn’t the plane to zip around the patch in, but it has its place—both in Cessna’s history as well as in today’s globalized market.

The Titan may not be fancy, but it’s solid and safe. And it can haul a whole lot of people, fuel and cargo. Even in today’s ultra-connected world, we still need to get people and products from Point A to Point B the old-fashioned way, and the 404 Titan Ambassador, Courier and Freighter are up to the task. 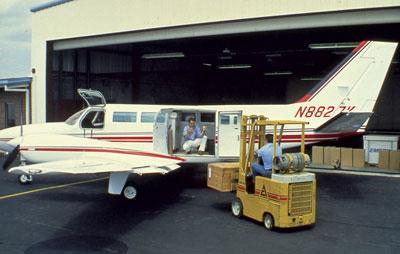 Special thanks to Cessna twin specialist Jerry Temple for the wealth of information he provided.