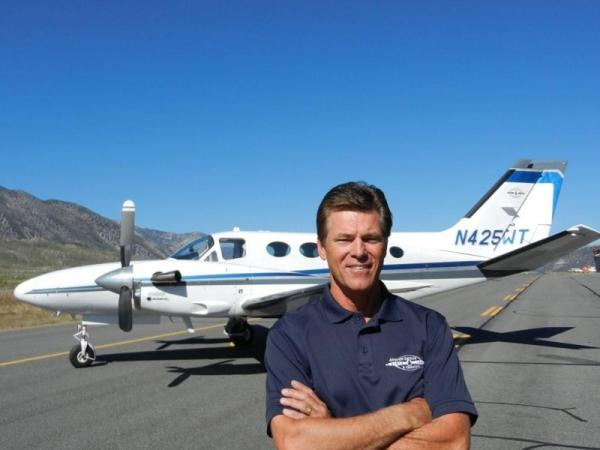 The reliability and ease of operation of the PT6A engines as well as the incredible performance makes the Conquest the finest aircraft Jim Irwin, president of Aircraft Spruce & Specialty Co., has ever flown.

In addition to Jim Irwin’s own 50-year career with Aircraft Spruce, he’s been a private pilot since 1976. Irwin has always been partial to Cessnas, moving up in the predictable way through 200-, 300- and 400-series aircraft.

Today, after 15 years of ownership in his 425, there’s nowhere else Irwin wants to go—that is, airplane-wise.
Some may know Jim Irwin as president of Aircraft Spruce & Specialty Co. Others probably know him as one of the pilots of N425WT, a Cessna Conquest I aircraft that rolled off the line in 1982 for model year 1983. Still others likely know him as The Kid in the Backseat of the Vultee.
“I grew up in an aviation family and have been fascinated with flying as long as I can remember,” Irwin said. “My dad, Bob, taught celestial navigation to bomber pilots in the Army Air Corps in World War II. He met my mom, Flo, shortly thereafter—and many of their early dates were flights in his surplus 1942 Vultee BT-13 around the L.A. basin. They married in 1953.”
“I spent many weekends at Brackett Field in Pomona—and can still remember the thrill of riding in the backseat with the canopy open [and] the smell of that old airplane in the air,” he continued. “Flying with my dad is one of my fondest memories of my childhood.”

A true family business
Irwin met his wife Nanci in high school, and the two married after college. Irwin earned a business degree from Cal State Fullerton while Nanci graduated from the University of Southern California in 1978.

In 1980, Jim and Nanci became president and vice-president of Aircraft Spruce & Specialty Co.—the company that had been started by Irwin’s mother, Flo. Together Nanci and Jim have led the company to success for several decades. (For more about Aircraft Spruce & Specialty Co.’s first 50 years, see “Aircraft Spruce Celebrates 50 Years of Service to Aviation 1965-2015” on page 38 of this issue. —Ed.)
“I’ve been involved with Aircraft Spruce my entire life, starting with sweeping floors as a 10-year-old when the company was founded at our family home in Fullerton, Calif. in 1965,” Irwin recalled. “As the company grew and moved to larger warehouses, I cut spruce lumber, cut metal and pulled and packed orders during high school, and then moved into office responsibilities.”

Over 50 years, Aircraft Spruce has added many product lines, the catalog has grown to 1,000 pages, and the company has over 200 employees in three regional warehouses across North America.
“We have been blessed with thousands of loyal customers worldwide and a very dedicated and hardworking staff here at Aircraft Spruce,” Irwin said. The couple’s four children—Mike, Krissy, Jeff and Rob—are all in management positions with the company, too.

Of course he’s a pilot!
“I earned my private pilot certificate at Chino Airport (KCNO) in 1976 and added an instrument rating the next year,” Irwin told me. “I purchased a Cessna T210 in 1983 which I owned for 10 years until our growing family made a larger plane a necessity,” he said.
“We purchased a Cessna 340 in 1992, a Cessna 421C in 1997 and our current Cessna 425 Conquest in 2000.
“I enjoy the whole line of Cessna aircraft,” Irwin commented. “We flew the 421 for four years, and [the 425] is even better, with more room.”
Irwin’s number-one mentor in flying has always been his father. (Perhaps Jim’s sons can say the same, as Mike and Jeff are also pilots.) Irwin says his father Bob was always a confident but cautious pilot that taught him to respect procedures and weather.

“I have tried to adopt his philosophy on flying as my own over the years, and have passed those same principles on to my sons,” he said.
Irwin has 5,200 hours and has logged flights all around the United States and in Mexico. “Of course, the flight to Oshkosh each summer is always one we look forward to,” Irwin said. To arrive at The World’s Greatest Aviation Celebration, Irwin flies a route from Chino (KCNO) to Denver Centennial (KAPA) and then on to Wittman Field (KOSH). Each leg is about three hours in the Conquest.
You may be surprised to know that Jim Irwin takes a very traditional approach to flight planning. Though he has all kinds of avionics, software and other resources at his disposal, he revealed the following: “Paper charts work for me. I use the [avionics] for weather, but as far as flight planning...
I do things on paper.”

The aircraft with everything...
“We were told that there was a very nice 425 at Palomar Airport (KCRQ) and found it to be in excellent condition in all respects. It was well maintained and always hangared,” he said. The Conquest is a company aircraft for Aircraft Spruce & Specialty Co.
“I took my initial Conquest training at Flight Safety in Wichita during the worst snowstorm they had in years. It was actually better to be sweating it out in the simulator than to be outside that week!” Irwin said.
“I have since taken my recurrent training at ProFlight in Carlsbad where Caleb Taylor and his staff have provided excellent classroom and sim training.” (ProFlight, LLC offers a variety of courses including Cessna supported initial and currency training for Cessna CJs as well as initial, currency and transition training for Conquest I and II pilots. —Ed.)

... including a few changes
Like anyone else, Irwin sometimes struggles with finding the time to fly. However, he can’t use the frustrations of Southern California traffic as any excuse. “Our Conquest is hangared at Chino Airport, which is about 15 minutes’ drive from Aircraft Spruce headquarters in Corona,” he explained. “Our avionics shop, Advantage Avionics, is housed in the same hangar building.”

“The Conquest had original Collins nav/coms when we purchased it, and we replaced these with Bendix King KX-165/155 radios immediately,” he explained.
“In 2007 we upgraded to Garmin GNS 530/430 [GPS nav/coms] and in late 2014 replaced those with GTN 750/650 avionics which are loaded with great features,” he said. “Quite a change from the avionics that were in use 40 years ago when I began flying!”

When I asked him how he likes the latest and greatest from Garmin, Irwin said, “I’m amazed at the size of the screen and the quality of the graphics; turning knobs [before] wasn’t a big deal, but I do like the touch screen. N425WT has about everything I would want in it now.”
The Conquest is also well prepared for weather; the partners recently replaced the wing boots with Ice Shield boots. Irwin told me the boots look great and have proven very effective in icing conditions. “About the only thing we will need is a new interior and exterior paint at some point, although both are still in reasonably good shape,” he said.

A Blackhawk upgrade
from the operator’s perspective
The performance on Irwin’s 425 has been upgraded too. “N425WT had the original PT6-112 engines when we purchased it in 2000,” he said. “We flew with these engines until they were timed out in 2009.”
“We looked at the Blackhawk upgrade pretty extensively,” Irwin said. “We installed Blackhawk PT6A-135A engines and have been very pleased with the improved performance [of the Conquest]. From an operator standpoint, it’s great.”
Though the engines changed in 2009, the props didn’t. “We could have had a four-blade prop option, but it does make the idle speed and taxi speeds higher,” he explained. “We kept the three-blade props, as they were relatively new.”
The increased performance of the new engines has been very good. Irwin told me, “Cruise speed has increased from 250 KTAS to 265 KTAS in the mid-20 flight levels—and climb performance has improved dramatically as well.

In addition, he said, “ITT temps remain much lower during climb and allow the pilot to maintain higher power setting without reaching temp limits.” (For details about Blackhawk’s XP135A engine upgrade, see “Blackhawk XP135A Engine Upgrade for Conquest I Aircraft” on page 35. —Ed.)
“I flight plan for 500 pph fuel flow which provides a comfortable range of about 1,000 nm,” he said. “The reliability and ease of operation of the PT6 engines as well as the incredible performance of the Conquest makes it the finest aircraft I have flown and perfect for our flight profiles.”

“But don’t you want a jet?”
“People sometimes ask me, ‘Don’t you want to move to a jet?’ But I’m very comfortable in the 425. It’s easy to fly—and more economical.”
Irwin uses his Conquest for business trips around the southwestern United States as well as for flights to Oshkosh and Sun ‘n Fun. “We fly to Mexico quite often, as well as for weekend getaways to destinations in the western states,” he said.
“I like that we’re not limited. We [can] go to Monterey [Calif.], Oregon, Seattle, Puerto Vallarta. In this aircraft, 700- to 1,000-mile trips are a pleasure.”
“The Conquest has proven to be reliable over the 15 years we have owned it with very reasonable maintenance costs. It has proven to be a very solid IFR aircraft which sheds light ice easily and which has the capability of topping most weather, even in the summer.”

Appreciation for Cessna aircraft,
General Aviation
Clearly, Irwin has been partial to Cessnas during his 40 years of flying. Though he flies his father’s Navion Rangemaster as well, Irwin has no plans to sell the Conquest. “It is fun and easy to fly, and I look forward to many more years of great service from N425WT,” he said.
Not only is the Conquest a business tool, it keeps the Irwin family closer. “My dad is now 95 years old and living in Lake Havasu City, Ariz., where my brother John also lives,” he said. “The Conquest makes the trip from Chino in about 50 minutes, making it easy to fly out to visit. It would be a six-hour drive, which makes you really appreciate General Aviation!”

Heather Skumatz is managing editor
for Cessna Flyer. Send questions or
comments to .