The Cessna 425 Conquest I 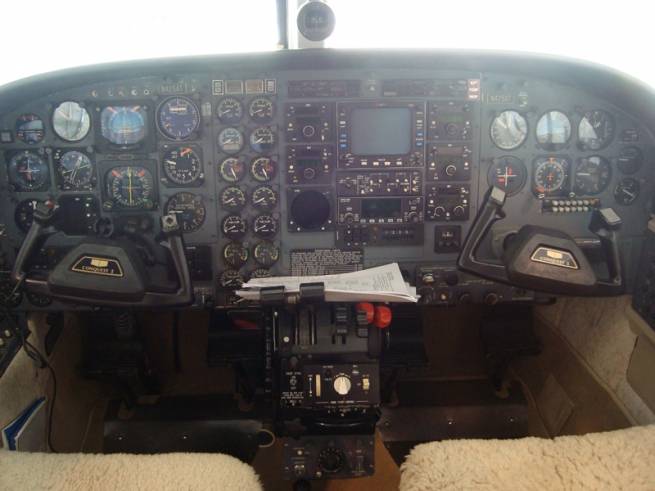 Putting a Cessna 425 through its paces.

Cessna got it right when it brought the Conquest I to market. It was designed to be simple to fly and an easy transition for a 400-series Cessna pilot to make.
I flew in a Cessna 425 with an owner/pilot as part of his annual training required by insurance. I was able to sample the aircraft’s handling and performance characteristics and observe a private pilot putting the machine through its paces.

Remarkable features
This particular aircraft featured all original radios with the exception of a Bendix/King KLN 90B GPS. All are coupled to the original autopilot—and it worked flawlessly.

The starting of the plane is super-simple. Cessna engineered a generator assist feature that allows you to start one engine, turn on its generator, and then just start the second engine without fear of blowing a current limiter in the process. This makes for cooler starts and less juggling of the generators.
Unlike most PT6-powered aircraft, the condition lever has only one position (“on”) and it turns the gas generator at 58 percent. Taking the props out of feather has them idling at 1,200 rpm. The engines are derated at 500 shaft hp, and at takeoff power the props are only turning 1,900 rpm.

The runup is also a simple affair, very similar to what you would do on any piston airplane, with the addition of the auto-feather test. Auto-feather is a go/no-go item on the Conquest I. Pushing the power levers up to 1,200 pounds of torque, the plane accelerates smartly, quickly reaching its rotation speed of 96 knots.
At anything other than gross weight on a 90-degree day, you can comfortably operate the plane in and out of 3,000 feet. On a hot day at gross weight, the accelerate-stop distance calculation is close to 3,500 feet, while the accelerate-go distance—the distance to clear a 50-foot obstruction after experiencing an engine failure at rotation and continuing the takeoff—is less than 3,000 feet.

These are remarkable numbers especially compared to the Conquest I’s piston cousins, the 421 and 414. That, coupled with the amazing time between catastrophic failure rate of the PT6A (more than 36,000 hours) and its stable-as-a-table flight characteristics have earned the Conquest I a remarkable safety record. Some aviation writers of the time had nicknamed it “the baby carriage,” because it is about the easiest airplane to gain multi-engine turbine experience in.

A realistic training session
My student that day was a retired doctor who now runs a national drug testing consortium. He’d owned the Conquest I for over 14 years, and prior to that he’d owned a 421. I watched him as he put his 8,600-pound machine through 45-degree left and right bank turns, minimum controllable airspeed demonstrations in the clean and dirty configurations, and imminent stalls in the clean and dirty configuration.

He nailed it all to commercial standards despite holding only a private pilot certificate with instrument rating. His single-engine work was equally impressive, and we even executed a single engine go-around—something I would never do in a piston airplane.
For those unfamiliar, a PT6A allows you to feather the prop while the engine continues to run, thus allowing the generators and hydraulic pumps to remain online—and the prop can be taken out of feather quickly if needed. This allowed us more realistic training.
The plane climbed at 280 fpm, which was exactly on book spec for the conditions.

Approaches are simplified by pushing the props forward to 1,900 rpm first, then deploying approach flaps and landing gear to create the drag profile that gets you the descent rate you want.
Because it’s a turboprop, you can chop the power without fear of shock-cooling the engines, so slam-dunk arrivals are actually fun as those big four-blade props become air brakes at flight idle.
Landings are classic Cessna 400-series simple and the big oleo strut landing gear can absorb most minor misjudgments. Reverse makes short-field work look easy and gives the pilot confidence to operate on strips as short as 2,500 feet.

The costs
The 425 is subject to Cessna’s Supplemental Inspection Document (SID) program. Adherence is mandatory on turboprop aircraft, and the SIDs require (among other things) the de-mating of the wing and tail from the fuselage to inspect for corrosion. Although very few problems have been uncovered in Cessna 425s, the inspection must be done—and it can run into six figures if issues are uncovered.

On the positive side, the Conquest I will allow you to take six passengers and luggage 1,000 nm with reserves in pressurized comfort at very close to 300 mph. The 5.0 psi differential cabin pressurization system gives you a 10,000-foot cabin at nearly 28,000 feet on a standard day. That gets you on top of pretty much all the weather.
Because FL 290 and above is subject to Reduced Vertical Separation Minimum (RVSM) protocol, few noncommercial aircraft are operated that high. (RVSM requires certain equipment on board and specialized crew training.) A Cessna 425 is typically happiest in the 21,000- to 24,000-foot range.

As for fuel burn, you can figure 600 pounds of fuel the first hour and 400 pounds per hour every hour after that, which translates to 77 gph on a two-hour flight and 69 gph on a three-hour flight—but you are doing this at approximately 253 knots true airspeed. And Jet-A typically costs less than 100LL fuel.
Even though the turboprop world may not be for everyone, Cessna got it right when they brought the Conquest I to market. I asked my student if he would ever consider selling his plane, and he said, “Only if I am lucky enough to move up to a Citation!” That tells me he thinks pretty highly of his Conquest I.

Michael Leighton is an 8,800-hour, three-time Master Flight Instructor, as well as an A&P mechanic. He operates an aircraft maintenance facility and flight training company in Spartanburg, S.C. You can find him on the web at flymkleighton.net. Send questions or comments to .