Come and join our community. Expand your network and get to know new people!

Photos Videos
View all videos
Events Groups
Sorry, we currently have no events.
View All Events
View all groups

STEVE ELLS replied to the topic 'Keith Airconditioner Maintenance' in the forum. 2 hours 9 minutes ago

I've reached out to:
Mitchell Hudson

Since he's in customer service, I expect he will say yes.

A brief overview of a complete service. It includes pulling all the refrigerant out of the system if it hasn't already leaked out, doing a leak check by applying a vacuum and seeing if the system holds the vacuum. Servicing the compressor with oil, then installing the proper amount of the correct refrigerant.

I would like you to tell me what Mitchell told you, what actions you took and how it came out.

STEVE ELLS replied to the topic 'Nose wheel shimmy' in the forum. yesterday

Thanks for letting us know.
A very comprehensive article.
Steve

STEVE ELLS replied to the topic 'Vibration Issues' in the forum. yesterday

Hi,
I suggest that you need to take a good look at the engine cowling, the various parts of the baffling system and the flexible baffle seals.

Look closely for evidence of places where the engine or an accessory is contacting the airframe.

Unless someone seriously messed up at the engine shop or the prop shop, balance is pretty close.

When the rotating mass was dynamically balanced, did you notice a big difference in the vibration level?

Take a look and let me know if you find any contact.

McFarlane Aviation replied to the topic 'Nose wheel shimmy' in the forum. 4 days ago

Hi John,
Our founder and CEO Dave McFarlane wrote an article that details his experiences fighting nose wheel shimmy and gives solutions. You can find it here: can-you-stop-nose-gear-shimmy.pdf (mcfarlaneaviation.com). I see that you’ve already put extensive work into fixing the problem – but thought this may be helpful in understanding the nose wheel shimmy and give some effective steps to prevent them in the future.

Michael Dieck replied to the topic 'Vibration Issues' in the forum. 4 days ago

You did not mention whether the constant speed propellor had been overhauled at the same time as the engine.

Did your AMT make a logbook entry with the before and after IPS reading ? Say, final balance .07 IPS @ 240 degrees…

Hartzell props have blade bearings that are hand grease packed at overhaul and then lubed again at Annual or 100H intervals. SM warns to remove one grease fitting before pumping in six pumps (approx 1 ounce) in each blade bearing. If the prop had been balanced and then lubed the grease may not have been evenly distributed.

What type of maintenance has been done to the engine & prop since the first dynamic prop balance? Simple things like reorientation of the prop spinner from its index markings to something else will cause an imbalance, same goes for using different length screws in spinner.

I use a Access Pro Balance Prop Balancer on a regular basis. Sometimes a too good to be true final balance (less than .02 IPS) causes the other end of the rotating mass to be off balance, in which case two vibration transducers are needed (one at each end of the engine case) to perform a vibration sweep over the cruise rpm you are experiencing the vibration. The fix is to find an acceptable small imbalance at the prop end as it is nearly impossible to add or remove weights at the other end of the crankshaft.

Pat Jurgensmeyer replied to the topic 'Anyone Attempted Mag Variance Update on G1000?' in the forum. 4 days ago

I have the same issue. Anyone know how long this should take?

I am so pleased to be able to ask these questions on this forum site!

I am asking for recommendations for service shops that can trouble shoot my Keith Airconditioner. I have replaced my dryer and my evaporator fan. it does not seem to hold a charge. I am planning to replace my KFC 200 auto pilot with a G500 and think this is a good time to have the AC work done since the unit in the tail of the plane will need to be removed during that install.

joey murray created a new topic ' Vibration Issues' in the forum. 5 days ago

STEVE ELLS replied to the topic 'Nose wheel shimmy' in the forum. 5 days ago

STEVE ELLS replied to the topic 'C-150L Nose Wheel fender' in the forum. 5 days ago

Hi Dennis,
I guess I could mutter something like, "That's why mechanics get the Big Bucks," but short of building an exotic use-once-every-year tool, there is no real trick.
One "hack" I've used are putting a couple of boards under the tire/wheel assy to get it to the correct level. That reduces the chores to two; aligning left and right and back and forth.

I hope that helps,

Just a little more info on my Nose wheel fender- I removed it for repair- and reinstalled nosewheel- with no problems- but just wondering if there is any tricks to reinstall by me alone, seems kinda tricky to have to hold tire and install axle bolt-
Thanks
Dennis

Are there any hints to C-150L Nose wheel fender removal and installation?

PAOLO MONTANARI replied to the topic 'Nose wheel shimmy' in the forum. 6 days ago

STEVE ELLS replied to the topic 'Nose wheel shimmy' in the forum. 6 days ago

Hi John,
What a bummer.
I think you're referring to what's called the steering bungee. It is the connection between the rudder bar and the nose wheel.
There have been more than a few nose gear stop limit tangs broken off by using a tug and a long tow bar. A close inspection of the lower part of the nose gear attach casting will show if the stop has been sheered.
If it has, it's possible that the steering bungee was damaged.
The bungee is a spring loaded tube that connects what's called "the whiffletree" a part of the rudder/nose wheel steering mechanism.
One the ground the nose wheel is steered by connection with one end of the bungee. On the ground everything--the whiffletree, the fwd and aft end of the bungee and the steering collar on the nose gear.
Once the nose gear extends, it's locked forward by the centering lug on the upper torque link; that locks the forward end of the bungee in a static position--it can't move.
But the rudder pedals must move to move the rudder; that's where the spring connection in the bungee comes in.
I haven't spoken with a Cessna engineer on this, but I wonder how much the springs in the bungee contribute to suppressing nose gear shimmy.

What you are describing is violent--please look extra closely at the cast parts at the top of the strut and at the bottom that secure the nose gear assy to the firewall. I have heard of those parts being broken during violent shimmy episodes.

It seems that the steering bungees, part number 0760622-1 are aging. And some have started to fail. The only source, besides a used one from a salvage yard is McFarlane. ($2048)

You should be able to tell if your bungee is bad by removing pushing and pulling on the end that sticks through the firewall; the spring loading should be felt both ways.

Please let me know what you find and of possible take pictures of any damage.

Sorry your vacay plans had to change.

Jen D has liked a Video 6 days ago 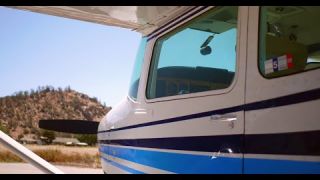 I put some cameras inside the airplane so you can see what takes place on this short IFR flight From Oxnard California (KOXR) to San Diego's...

TOM BRAEUNIG replied to the topic 'ELT Replacement' in the forum. 1 week ago

But, it also uses a velcro mounting strap. And, they recommend providing a 1/2 amp fused circuit to keep the ELT battery charged, since the internal GPS function requires some power to keep it's GPS position updated.
That may also be true of the Kannad unit.

So I think I will wait for the newer Kannad unit, with the Draw Latch retention strap, to become available. That should be sometime around mid July.

JOHN QUIMBY replied to the topic 'Nose wheel shimmy' in the forum. 1 week ago

Well after buying the Macfarlane rebuild kit the shop replaced the bushings; shims, bolts, bearing felt, repacked the bearings, serviced the dampener, AND replaced and balanced the tire. Apparently the wheel had a ton of extra weight RTV’d on and had worn very unevenly.

After all that I have a more serious problem that was only discovered on the check ride. It appears the violent shimmy x 2 times sheared the jack screw that connects the pedals to the nose wheel / tail. They will have to dig into to see how bad it really is. I’m praying for no firewall damage. I don’t understand why it happened since I didn’t have a nose heavy landing when it happened. It’s not clear to me when it broke as I had two non-eventful landings on my way to drop it off at the shop.

Wondering out loud - it’s hard to imagine I didn’t notice it on the flight and taxi over to drop it off, could it have been broken by the tug moving it around off the ramp? Not that speculating will get it fixed any sooner. Scrubbing the vacation flight and getting in the car to drive 10 hours.

STEVE ELLS replied to the topic 'Textron Registration' in the forum. 2 weeks ago

Open the website; in the upper right hand corner is a link to register.
After registering, click on the "Customer Portal" tab on the right.

I think you'll be able from there.

STEVE ELLS replied to the topic 'ELT Replacement' in the forum. 2 weeks ago

Who ever is making the decisions at that company needs to work harder to take care of the aftermarket customers.

I installed an ACK E-04 complete installation kit. However, it does not have an internal GPS--I have to run a wire from my GPS to the ELT for increased accuracy.

I like it because it uses D cells when it's time for a battery change.