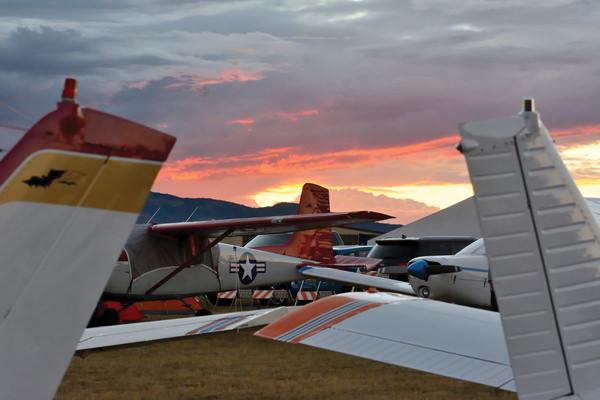 Aircraft Owners and Pilots Association (AOPA) made a huge change a few years ago when it discontinued its big annual convention and chose to organize regional fly-ins instead. In 2016, these fly-ins have started to hit their stride.

AOPA reported that the Prescott event drew 6,300 attendees—about two-and-a-half times the number that attended Salinas the year prior. That figure is as many as attended the last AOPA Aviation Summit in 2013.

AOPA’s regional fly-ins all seem to have their own flavor, depending on the aviation scene locally. As Prescott is home to one of the two major campuses of Embry-Riddle Aeronautical University (ERAU), the university had a big presence. ERAU had a tent to welcome alumni which I checked into, as I meet the prerequisite.

Embry-Riddle also had a recruitment tent. The campus itself is a few miles away from the airport, but ERAU’s flight operations are based there. They had a couple of their airplanes on display, resplendent in ERAU livery.

The flight line displayed about 50 aircraft. American Eagle was giving tours of one of its regional type jets and it drew a long line of interested folks. A couple of warbirds and a smattering of Cessnas rounded out the aircraft display.Programming

The program started with the Barnstormers Party on Friday night. This was well attended with good food and a country band. I may just be spoiled living in the Wine Country that is also well stocked with craft breweries, but I would vote for a more interesting selection of adult beverages at future events.

Saturday kicked off with a pancake breakfast, but I did not attend. I was planning the nearly four-hour flight home after the show, and sleep took precedence over food.

Lunch on Saturday included hot dogs, hamburgers, barbecue sandwiches and chips. During the midday break, we got an aerobatic demonstration. This seems to be a standard feature of the regional events.

I am not a good one to pass judgment, as I am not an aerobatic pilot—and after more than 35 years attending airshows, I am a little blasé when it comes to single-aircraft aerobatic routines. I may also be spoiled by seeing the late great Bob Hoover perform in the Shrike Commander. (For those who haven’t seen Hoover’s routine, I recommend you find it on YouTube.) 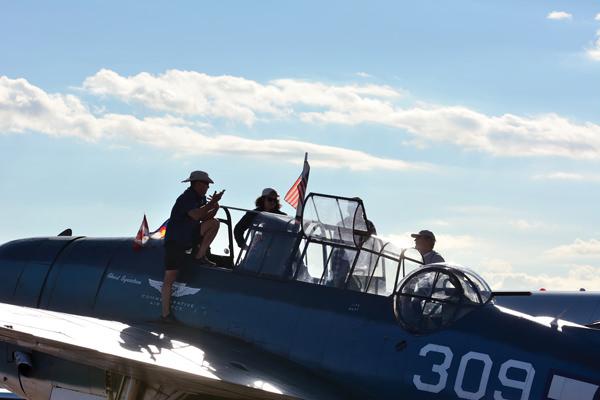 The activity centered around six different buildings. The main hall was a large hangar that served as a dinner space and was the venue for six different presentations, plus humorist Rod Machado doing a breakfast show on Saturday morning.

One of the larger hangars served as the exhibitors’ area, and the other four hosted seminars (24 in all), plus an AOPA town hall meeting that concluded the festivities in the main hall.

The exhibit hall was well attended by various exhibitors. As one might expect with the ADS-B mandate looming, avionics manufacturers and vendors were well represented.

CFA supporters Appareo, BendixKing and Garmin were there, as well as

representatives from Avidyne and Genesys Aerosystems (formerly S-TEC), along with a number of other vendors and installers.

Dozens of others, including Aircraft Spruce, Avemco, Concorde Battery, Ice-Shield, Lycoming, MT-Propeller and UTC Aerospace—all supporters of your Cessna Flyer Association—were there to interact with the crowd and show their wares, too.

With such an assortment in the exhibitors’ area, I was able to entertain myself for a couple of hours. Like many, I am still looking at my options for ADS-B compliance.

The four seminar pavilions were segregated by topic area. There was an Aviation Products Pavilion, a Skills and Safety Pavilion, a You Can Fly Pavilion, and an Airports and Advocacy Pavilion. All had seminars simultaneously, so I could only sample a few.

I attended a discussion titled “Helping You Protect Your Airport” because I was interested in what sort of outreach AOPA was doing on that front, as there has been a recent shake up of the airport support staff at AOPA.

As a longtime commissioner on our local airport body, the subject matter itself was not new to me, but I was glad to see AOPA making an effort in this area. Local airports are coming under increasing financial pressure in many communities where the airport is not self-supporting.

The other seminars offered included a wide range of topic areas as well as a Rusty Pilot Seminar, a program recently introduced by AOPA. Most of the seminars focused on flying or issues related to inflight operations. Rod Machado’s seminar was well attended, and he was entertaining as usual. 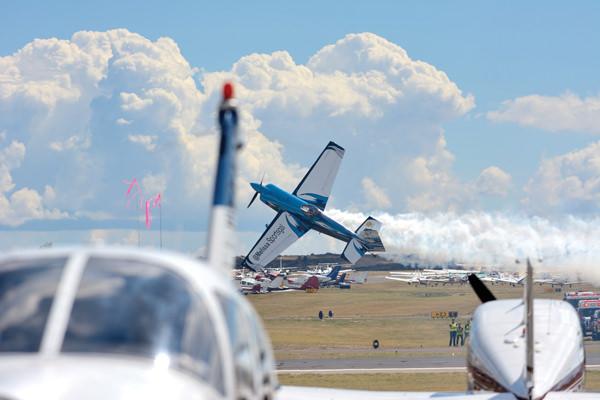 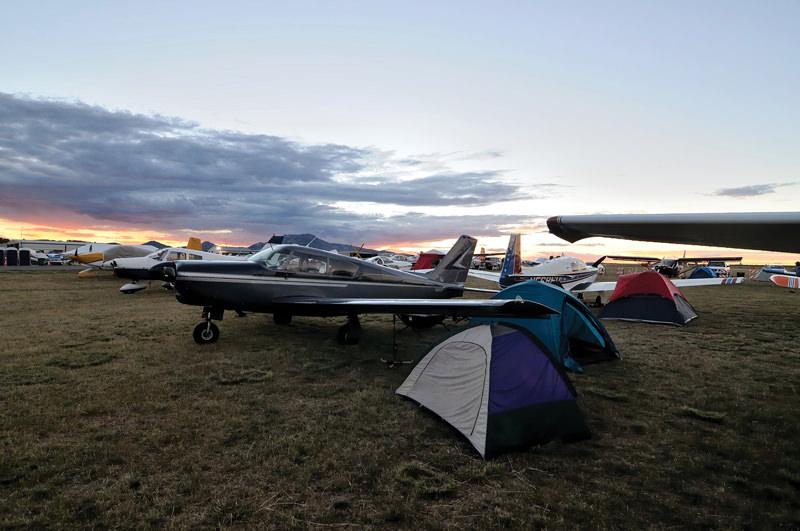 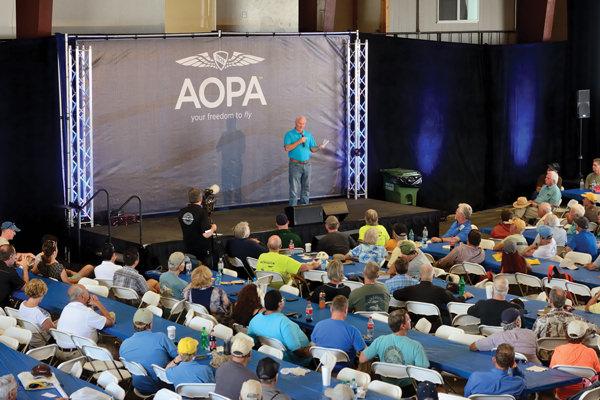 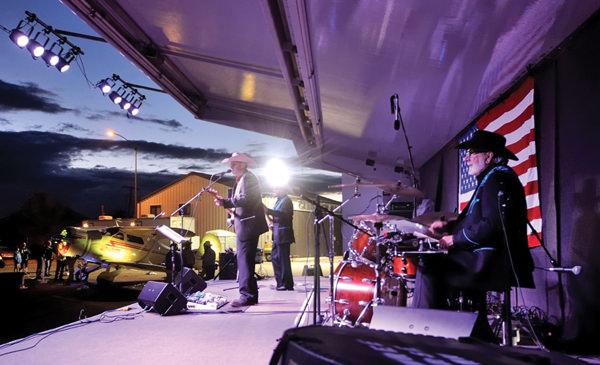 The number of seminars was substantially greater than was the case in Salinas in early 2015. Given the increase in attendees, I hope that AOPA keeps expanding the offerings.

In the future I would like to see more seminars about how to own and buy aircraft, aircraft partnerships, aircraft insurance, etc. I find that a lot of owners and would-be owners are not well versed in some of these basics.

The AOPA tent provided an opportunity for everyone to access most of the association’s member services. The legal services folks, flight planning and other areas were well staffed and seemed to have a steady stream of customers.

A regional format for the AOPA events makes a lot of sense to me. I had been to several of the Expos and Summits in the past, and they were always competing with Oshkosh for my attention and travel dollar. I suspect that I am not alone in that. The fact that the Prescott fly-in had more attendees than the last Summit in Fort Worth, Tex. is testimony to the success of the concept.

It seems likely that AOPA will be able to attract more exhibitors as the attendance numbers grow. Its only challenge may be finding airports with enough hangar space to put on ever-larger events.

Fortunately, out in the Western states we have a number of airports which used to be military bases and generally have huge hangar space. My suspicion is that West Coast venues will likely be the best attended, simply because they are the farthest from Oshkosh. Those suffering from fly-in withdrawal symptoms because they couldn’t make Oshkosh are a ready pool of enthusiastic attendees. This year, I was one of those.

There is no closing this without saying a good word about the ATC tower crew that kept everything moving at Prescott. They clearly spent considerable thought on taxi routes and procedures, and then executed everything in a calm and professional manner. To my knowledge there were no mishaps, and a good time was had by all.

Kristin Winter has been an airport rat for almost four decades. She holds an ATP-SE/ME rating and is a CFIAIM, AGI, IGI. In addition, Winter is an A&P/IA. She has over 8,000 hours and uses her aircraft in furtherance of her aviation legal and consulting practice. Winter also assists would-be owners with training and pre-purchase consulting. Send questions or comments to .