I'd been attending AirVenture—“Oshkosh”—every year since 1994, but always by a public conveyance. For three years I had been speechifying about flying my 1960s-era single engine aircraft, Papa, to KOSH, but every year I found that the airplane wasn’t quite ready, so it was to the airlines (again).

By early July of last year I had installed the Electronics International CGR-30P and -30C, two very sophisticated engine and systems monitoring instruments. (For more information about the installation, see “Trading Six Instruments for Two: Cluster Gauge Replacement” in the August 2015 issue of Cessna Flyer. —Ed.).

I had completed the wiring to my new Aveo Engineering Ultra Galactica wingtip navigation and strobe lights system; installed new tires from Desser Tire; and repacked and serviced the landing gear struts. My portable oxygen system manufactured by Precise Flight was filled and tested.

The night before the trip, I was striving to remember everything. I would be away from my local airport for nearly three weeks: did I have the oil, tools, supplies and emergency equipment I would need?

The next morning, I pulled my car into the hangar after I had loaded Papa with tools, a suitcase, an overnight pack and a few other essentials. (Only later, when I landed in Pierre, S.D., did I realize that I had failed to throw in my canopy cover!)

As I roll out, I review my plan. It’s 6:30 a.m. on Wednesday, July 15, 2015. I am due in Waupaca, Wis. (KPCZ) to deliver a seminar at the Cessna Flyer Association’s annual pre-OSH get-together (The Gathering at Waupaca) on Sunday, July 19. (I figured I would start early enough to make the 1,700-mile trip over three days; if the weather blocked my progress, I still had a couple of days of wiggle room to make it to KPCZ.)

I work my way down the items on my before-takeoff checklist. I’ve checked the fuel level in both tanks and entered those totals in my monitoring system. I’ve checked to make sure there’s no water in my tanks. My camera and survival gear is at hand. The windshield is clean. I’m strapped in.

As I start moving, I realize that I am finally going to be flying my airplane to AirVenture in Oshkosh.

I taxi out to Runway 01 and check the time. It’s 6:40 a.m. The hour meter on the CGR-30 reads 213.5. Throttle in; noise increases; speed increases; at 65 mph I raise the nosewheel and I’m officially in the air and on the way to Wisconsin.

I’ve flown from my home airport in Paso Robles, Calif. (KPRB) to Las Vegas often; I know the way. KPRB to Palmdale (KPMD) near Edwards AFB (the West Coast landing spot for the Space Shuttle); then to Daggett VOR (KDAG) to avoid the military airspace near Edwards before I intercept the I-15 highway to the Salt Lake City area where I plan to turn east and cross the Rocky Mountains by following I-80.

Two-and-a-half hours after launch, I fly over the Las Vegas area and then continue for another hour to Cedar City, Utah (KCDC), elevation 5,622 feet MSL, where I stop for fuel ($4.99/gal).*

I buy 35 gallons of Avgas; dividing that by 3.5 hours gives me a 10 gph fuel consumption figure. I’ve flown over 450 statute miles; the air has been smooth and I’m happy.

But it’s getting later in the day, and the air over the desert is heating up.

I checked with some veteran flyers before launching and was advised to start flying as early as possible each day when the air is cool and the winds haven’t yet awakened.

I was also told that the ride in my little airplane would continue to deteriorate due to thermal lifting. If I continued flying after noon, it was also likely that I would have to maneuver around afternoon convective activity.

I wanted a no-stress flight, so I planned to follow this up-early, stop-early plan.

Not long after taking off from Cedar City, I realize that I’m in for a whuppin. The wind speeds have picked up, and it’s blowing at a good rate.

Turbulence increases and I tighten my seatbelt as I’m thumped, twisted and shaken for at least a full hour before I finally give up the fight and land at Provo, Utah (KPVU), elevation 4,497 feet MSL, for the night.

I’ve gained another 164 miles of progress, but it’s been hard-won.

Before my departure from Paso, I talked to Dennis Lyons, a local retired airline pilot, about routing. Lyons has flown his single-engine airplane to AirVenture many times.

I could have taken a southern route following U.S. Highway 40 through Barstow, Flagstaff, Gallup and Albuquerque, but Dennis suggested I cross the Rocky Mountains farther north by following I-80 as it crawls east up through Parley’s Summit (7,120 feet MSL), the mountain pass east of Salt Lake City.

I took Dennis’s advice and was headed that way when I landed at Provo Municipal. Even though it was just past noon, I was through for the day. 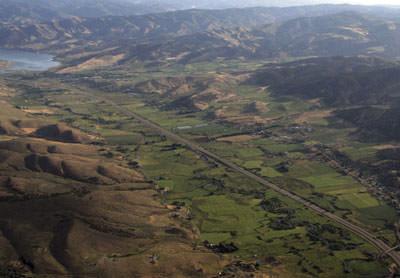 I didn’t really know much about Provo except that it had a good airport and sold Avgas. I bought 14.7 gallons at $5.80/gal. TAC Air PVU is the FBO in Provo.

I unload my overnight bag, my laptop computer and other essentials before I brief the line crew on fueling Papa. The tach reads 218.1.

TAC has a good deal with a local motel and in less than a second, Carly had called the Hampton Inn. A van arrived and zipped me to a nice room. I asked if it would be possible to be driven out to the airport at 5:30 the next morning. After a little checking, the staff said Jon would be willing to come in early. 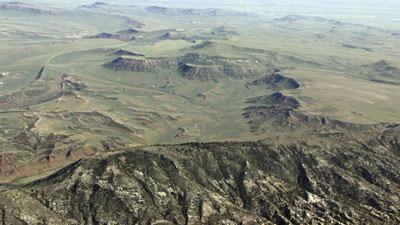 Jon showed up on time at 0530. As he dropped me off in front of TAC, he thanked me for helping him—he said he had some work he had wanted to get done and appreciated the early start to the day!

Under clear skies and calm winds, I launch just before 7 a.m. I circle above the airport until I level out at 9,500 feet, then head up toward Salt Lake City, hugging the west side of the Wasatch Mountains until I am able to turn east.

85P is ready for the task and pulls strongly as I look out. I look to the western half of the Utah which is flat and desert-like; then, within seconds, I look out at the mountains to the east. More than a few of these peaks top 11,000 feet MSL.

The air is smooth and the views are spectacular. I can’t help but smile. This is what I love about flying.

I head east, looking into the sun. I switch fuel tanks from left to right every half-hour for two reasons: 85 Papa flies on rails in cruise, so I need something to do; and to keep him flying straight and level I work to keep the lateral balance as even as possible.

I note the changes in sequence along the right margin of a 5x7 notepad on my kneeboard. Along the left margin I write every frequency change from ATC. (See the sidebar on page 61 about flight following. —Ed.)

I’ve got a good tailwind; I note a 166 knot ground speed during this leg.

My 180 hp aircraft is a pretty good performer at lighter weights and has a good high-altitude wing, but I had been concerned about the possibility of high winds in the Provo-to-Nebraska portion of my trip. I breathe a sigh of relief as I crossed the border into Nebraska and watch terrain drop away below me. I’ve entered the High Plains. 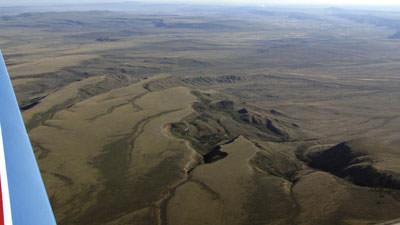 Taking into account my ground speed and range, I start trying to determine where to next land. As a pre-digital flyer, I break out a WAC chart (!). I use my Garmin 96 handheld GPS to determine the distances.

I switch on the Fuel Prices page on the Seattle Avionics’ FlyQ EFB software I have loaded into my iPad. I run through the following airports: KYKN (Yankton, S.D.), KOFK (Norfolk, Neb.), KBFF (Scottsbluff, Neb.), KANW (Ainsworth, Neb.) and KAIA (Alliance, Neb.) before I settle on Pierre, S.D. (KPIR, 1,744 feet MSL).

Jennifer at Mustang Aviation welcomes me. I buy Avgas (44.4 gallons at $5.23/gal) but more importantly, I meet Ed and Marsha Mason, a pair of lovable and fanatical fliers.

The Masons are flying their Vans RV-9A to AirVenture from their home in West Linn, Ore. And they, too, are at the end of their flying day.

Ed, Marsh and I make a plan. We rent a car—Jennifer gives us a half-day rate on the car and secures rooms at the local Days Inn—and talk about flying adventures as we hang out together.

They are delightful companions. On their first date, Marsha insisted Ed take her for a ride in his airplane. She didn’t know he flew an open cockpit, wood and fabric, low and slow Pietenpol Air Camper. She didn’t care.

That flight down the Willamette Valley south of Portland, Ore. sparked Marsha’s long-ago dream. She would become a pilot. The Pietenpol was donated to a museum; Ed built the RV-9; and Marsha went on to get her private pilot certificate at age 60. Their lives together rotate around flying.

Ed, Marsha and I eat the free breakfast, pile into the car and get to our airplanes just as the sun is rising in the east. There’s a little discussion about the weather between KPIR and KOSH, with ground fog and some low scattered clouds along some of the route.

Marsha and Ed choose to take a more southerly route, while I decide to head east and monitor conditions was I go.

I don’t need to fly as high when I’m east of the Rockies, so I climb to 5,500 feet, set my power and lean the mixture. I again toggle the Fuel Prices overlay on FlyQ, and after 2.3 hours aloft decide to land at Faribault, Minn. (KFBL), just south of Minneapolis-St. Paul.

When I land in Waupaca, Wis., the tach reads 226.2. (I wish I’d flown a much longer leg when I discover that 100LL is only $4.17/gal from the FBO, Plane Guys Aviation.) It’s taken me 12.7 flight hours to get to Oshkosh following my indirect routing.

I had reserved a car from Enterprise out of Stevens Point—no jacked-up OSH prices—and it was delivered to the airport within an hour after landing.

The CFA get-together is always a good time. On Sunday, I stand up in front of everyone and tell them about ADs. They’re gracious and thank me.

I’m glad I finally made the trip; I’m really happy that the weather cooperated and very happy that 85P ran so well. Next month, I’ll tell you about the trip back home.

*Fuel prices are according to the author’s notes from July 2015. They have not been adjusted to reflect current pricing, and should be considered only as general information.

Steve Ells has been an A&P/IA for 44 years and is a commercial pilot with instrument and multi-engine ratings. Ells also loves utility and bush-style airplanes and operations. He’s a former tech rep and editor for Cessna Pilots Association and served as associate editor for AOPA Pilot until 2008. Ells is the owner of Ells Aviation (EllsAviation.com) and lives in Templeton, Calif. with his wife Audrey. Send questions and comments to .