"The Paris of the Plains" - Kansas City, Missouri

Kansas City is the closest major city to the geographic center of the contiguous United States. As such, the city has been a hub throughout U.S. history. Officially deemed the City of Fountains—but colloquially referred to as the “Paris of the Plains”—Kansas City is now a burgeoning city for vacationers. Tourism grew by a whopping 500,000 visitors from 2015 to 2016 according to VisitKC.com. You can add yourself to the tally if you venture to the Heart of America this spring.

Getting there by air

It’s pretty easy to get here from anywhere, and there are plenty of choices for the GA flyer.

The GA-friendly Charles B. Wheeler Downtown Airport (KMKC) immediately north of the Missouri River will put you in the middle of the action. This historic airport was dedicated by Charles Lindbergh in 1927 and was one of the headquarters for TWA.

With a 24-hour control tower and FBO, Category I ILS, plus full maintenance, decent self-serve fuel prices ($3.99/gallon at the time of this writing), aircraft leasing, flight instruction, hangar rentals and car rentals, KMKC is a busy place for GA, charter and corporate operations on the Missouri-Kansas border.

Operations at KMKC average around 200 per day according to airnav.com, and the runways (01/19 and 03/21) are long and wide—and well maintained, too: both are listed as excellent. There’s another nice perk at KMKC. A free-of-charge wash bay is provided by the Kansas City Aviation Department for owners to wash their aircraft (cleaning supplies not included).

You’ve got plenty of GA alternates to choose from—it is the Heart of America, after all. The closest three are all to the east of KMKC. One of these is the non-towered East Kansas City Airport (3GV) in Grain Valley, Missouri, a privately-owned airport that’s been open to the public for more than six decades. Fuel here is also $3.99/gallon.

If you want a super-smooth landing—or at least, all the help you can get with one—the recently resurfaced runways at Midwest National Air Center Airport (KGPH) near Mosby/Excelsior Springs might be the spot for you. This airport is northeast of Kansas City and is relatively new: it opened in 1996. Self-serve Avgas is $4.09/gallon, and the field is quieter with around 33 operations per day. A nice perk at KGPH is that you’ll earn one free night of tiedown for every 10 gallons of fuel you purchase—and they have Mogas, too.

Local pilots Dale and Carol McCaslin recommend making a stop at Miami County Airport (K81) in Paola, Kansas. It’s a short flight to the southwest of KMKC and there’s a good barbecue restaurant on the field. The restaurant is open every day except Mondays; on Sundays, they serve a breakfast menu only. The airport has one paved runway and one grass strip.

The McCaslins are based at 0N0—Roosterville Airport in Liberty, Missouri. They told me that it’s sometimes called “Oh No” because of the 20 x 2,780-foot runway with obstacles. “Some pilots like the challenge,” they said. If you’re one of them, you’ll be rewarded with a fuel price of $3.85/gallon for full service. 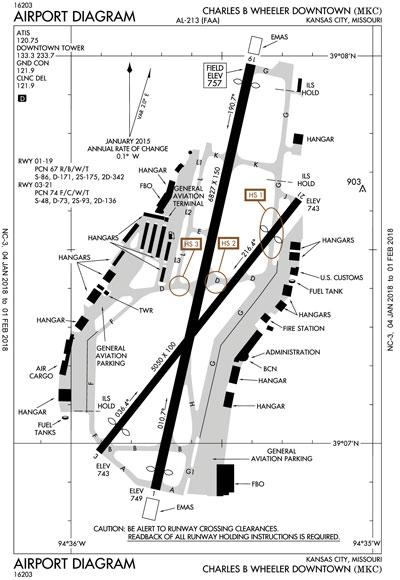 Though Kansas City isn’t the most walkable city in the United States, it’s on its way. The recent addition of streetcars downtown and a comprehensive plan for additional transit means this city may soon be navigable without four wheels as required equipment.

Introducing electric streetcars in Kansas City has been a resounding success, and they’re completely free to ride. Hours are generous (they run until 2 a.m. on weekends) and there are currently 10 stops.

For accommodations, I’d recommend checking out the hotel finder function at airnav.com. Type in the identifier of your planned landing airport and you’ll get a list of the closest hotels. From there you can reserve a room, as all of the listings have hyperlinks and/or telephone numbers.

My research showed that hotels near KMKC average between $125 to $160 per night. If you base your search from Kansas City International (KMCI) instead, you’ll find many hotels that run about half that much—but you’ll need to factor in the cost of a rental car. KMCI is well north/northwest of the central city. Museums and attractions TWA Museum

If you tie down at KMKC, your first stop could be the TWA Museum at the south end of the field. With TWA memorabilia from various decades, scaled-down airline models, a cockpit simulator and more, this is a fun spot for any TWA enthusiast. The museum is open Tuesday through Saturday from 10 a.m. to 4 p.m., and admission is $10 for adults ($7 for seniors). 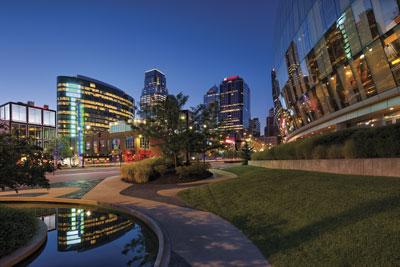 Also on the field at Wheeler is the National Airline History Museum. While the exhibits are closed through the end of this month, a grand reopening is scheduled for March 1, 2018. And if the website is any indication of what’s to come, it’s going to be pretty awesome.

Currently, the museum is fundraising to ferry a Douglas DC-8-62—one of five DC-8s left in service—to the site. The museum has multiple airliners and two simulators, including a custom-built multipurpose simulator and a Link Trainer.

General admission is $8 for adults, and you get to see a ton of stuff, including a TWA Moonliner II rescued after 25 years outside the TWA building; a Lockheed L-1049 Super Constellation (N6937C) that was featured in “The Aviator”; a Martin 404 that flew for Eastern Airlines and is now on static display; a Northrop Delta 1D that was restored by Max Conrad; a KC Eaglet made by the American Eagle Aircraft Corp. of Kansas City, which produced over 700 planes in six short years; and the museum’s newest acquisition, a Boeing 727-223. 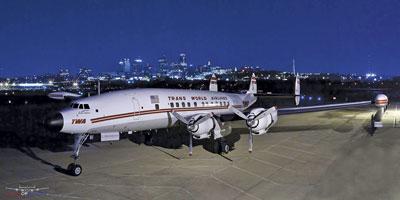 Kansas City’s architectural masterpiece, Union Station, is impressive inside and out. This enormous building saw its prime in 1945, when a million passengers traveled through on their way across the United States, including thousands of returning U.S. soldiers. But by the 1980s, the station had closed. A renovation of Union Station was completed just before the turn of the new century; Amtrak returned in 2002.

Today, Union Station is also the terminus for the streetcars, and is open daily from 6 a.m to midnight. Inside there is lots to see, including a permanent exhibit called the KC Rail Experience, plus other galleries that feature international exhibits, a science center called Science City, a 200-seat live theater and an 80-foot 3-D movie screen. National World War I Museum and Memorial

Heading south from Union Station you’ll encounter the Liberty Memorial Tower and the plaza that commemorates the sacrifices of the soldiers of World War I. This National Landmark is over 200 feet tall and quite stately. The observation deck is currently closed for a modernization project, but a museum representative told me it’s targeted to reopen by mid-March of this year.

The National World War I Museum is recognized as America’s official memorial to World War I and has one of the largest collections of Great War artifacts and documents in the world. The array offers an excellent record of all of the nations involved in the “war to end all wars.”

The museum is open Tuesdays through Sundays, 10 a.m. to 5 p.m. with expanded hours in the summer. If you can’t make it to the museum in person, the website offers three online exhibits accessible via the Google Arts & Culture project. 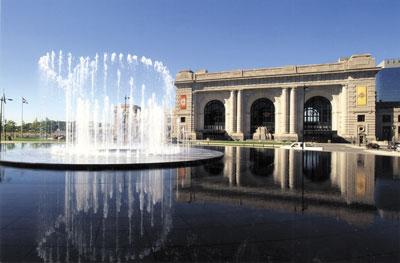 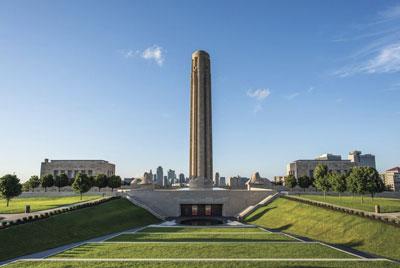 South of the World War I Museum is the Federal Reserve Bank and inside the bank is the Money Museum. This museum is free and open weekdays from 9:30 a.m. to 4 p.m. (The building is closed on bank holidays, of course.) You’ll need a state-issued photo ID or a valid passport to enter. Photography inside is permitted—provided you conform to the policies.

A one-hour guided tour or the self-guided tour allows you to see Harry Truman’s coin collection (500 historic coins on loan from his Presidential Library); the $40 million wall (a giant stack of cash!); educational exhibits on the functions of the Federal Reserve, the U.S. economy and counterfeiting; plus a design-your-own-currency activity for kids. 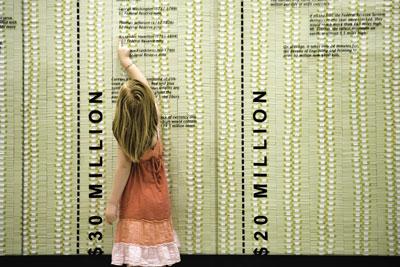 Aviation trailblazer Amelia Earhart hailed from the Kansas City area. To make a pilgrimage Earhart’s birthplace, you’ll have to cross the Missouri River and head to Atchison, Kansas.

The Gothic Revival home home at 223 N. Terrace Street was declared a National Historic Site in 1971 and was privately owned until it was purchased by the Ninety-Nines Inc. in 1984.

The museum inside the home offers the public a look at Earhart’s personal and family memorabilia along with displays that highlight Earhart and other female aviators. It’s open Tuesdays through Saturday from 10 a.m. to 4 p.m., and Sunday afternoons from 1 to 4 p.m. Admission is $6 for adults. 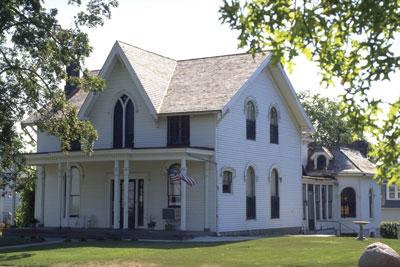 Now it’s time to eat! Kansas City is getting high marks from the foodies at Zagat: it was declared one of the “30 Most Exciting Food Cities in America 2017” by the organization, with a number of award-winning chefs and bartenders. But I’m here for the original “slow food”—the barbecue! What about you?

A few of the more noted spots include Gates Bar-B-Q, which has six locations, and Joe’s Kansas City Bar-B-Que, which gets a nod from Anthony Bourdain as one of his “13 places to eat before you die.” Joe’s has four locations; three are on the Kansas side of the metro area.

Perhaps the most legendary spot for Kansas City-style barbecue is at Arthur Bryant’s, founded by “King of Ribs” Arthur Bryant. The restaurant has been around for almost a century and though its namesake passed away in 1982, the recipes are going strong at two Kansas City locations.

These are just a few of more than a hundred restaurants that specialize in barbecue in Kansas City. If you really want to try one of everything (well, almost), consider taking the KC Barbecue Tour. You’ll be bussed around to sample various restaurants’ offerings with little to no wait time. Tickets are $65 for the Original tour with four stops, and $70 for the three-stop “‘Cue and Brew” tour that includes a complimentary beer or soft drink at each stop. The tour is a hit with locals and visitors alike.

Kansas City isn’t simply an old rock ‘n roll tune, or a place to eat barbecue before you die. It’s not even the only of the United States’ “twin cities” to share a name across two states. With a reputation for being both down-home and up-and-coming—and now, as a growing destination city—you might want to say “Kansas City, here I come!” before the airspace gets too crowded. 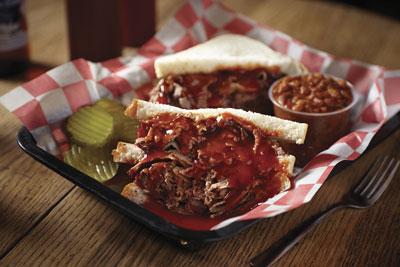