Wings Over the Rockies: Denver’s Air and Space Museum

Aviation is big—really big—in Colorado, but only one destination calls itself "Colorado's official air and space museum," and has a bill passed in the state legislature to prove it.

Over the Rockies Air & Space Museum (often called "Wings" by museum staff as well as visitors) in Denver's Lowry neighborhood recently celebrated its 20th year as an exceptional resource for airplane buffs, history lovers, schoolchildren and teachers, writers, researchers and the general public.
In honor of Wings' 20th anniversary, the museum threw itself a birthday party—complete with eight cakes, all adorned with little B-52s—in December 2014. The museum also introduced a new attraction to Denver last year for the holidays: a B-52 aircraft decorated with 52,000 lights.
Established on the grounds of the former Lowry Air Force Base, the museum is housed in former Hangar #1 of the base that today is part of unique planned mixed-use community. Residents here have a choice of condos, apartments and single-family homes, with lots of open space, plus a town center, restaurants, shopping, sports fields, aviation-themed art installations and more.
The museum keeps the heritage of Lowry AFB close at hand throughout its collections and archives. Over 30 military and civilian aircraft are featured in its 150,000-square foot hangar, which still offers plenty of space for activities indoors, some of which, like RC aircraft and ultra-ultra-ultralight demonstrations, and paper airplane creation and flying, can enhance a visitor's experience as well as garner some smiles.
The museum is also the site of the Colorado Aviation Historical Society's Colorado Aviation Hall of Fame that includes Colorado's only World War I ace, Capt. Jerry Cox Vasconcells, who, along with Denver mayor Benjamin Stapleton, went on to establish the municipal airfield in Denver in 1929.
Greg Anderson, CEO of Wings Over the Rockies Air & Space Museum, helped to pioneer EAA's Young Eagles and the Phillips 66 fuel rebate program. Last year at Oshkosh, Anderson was honored with the 2014 Phillips 66 Aviation Leadership Award. His important work to inspire youth continues; for details, see the sidebar on page 57.

What's inside
Don't miss a walk around the 1938 B-18A Bolo. The wings of this bomber stretch over 89 feet, and it weighs over 24,000 pounds. Declared surplus by the U.S. military in 1944, this B-18A is one of just five preserved in museums.
The 1944 Link Trainer is a fun piece of history you'll want to take in. This World War II-era version could be called the original "flight simulator," and students of the time reported it was harder to fly than an actual aircraft.
The museum also has on display a 1972 Vought Fighter A-7D Corsair II; a 1970 Rockwell B1-A Lancer (its variable geometry wing design is a good lesson in engineering); and a 1963 Convair F102A Delta Dagger, the "Deuce," which could travel at Mach 1.2.
The museum's 1950 B-57 Canberra is impressive, too. With an MTOW of over 60,000 pounds and ceiling of 60,000 feet, this aircraft was used for multiple purposes.
Another important aircraft in the museum's collection is the 1961 North American F100D Super Sabre, the successor to the F-86. As the first U.S. production aircraft able to exceed the speed of sound in level flight, it's worth your time to see this fighter-bomber on display.
Wings Over The Rockies Air & Space Museum is also home to a 1960 U-3A Blue Canoe light transport aircraft. This military version of the Cessna 310 went into service with the U.S. Air Force in 1957—and with its low operating cost, it stayed in service with the U.S. Armed Forces for almost two decades.
In addition, Wings includes exhibits on space and rocketry in its collection, with dioramas, hands-on exhibits and full scale replicas. The most popular of these, though, is a completely fictional craft: the Star Wars Universe X-Wing Starfighter.
The X-Wing has been on display in Denver since 1999. It was one of seven manufactured for the 1997 "Star Wars" movie trilogy release. If you are going to Denver expressly to see this exhibit, call ahead, because the X-Wing does travel for Lucasfilm events.
The museum's research library, which is available to all museum visitors, is a great resource for aviation history buffs—and aviation history professionals, too. The library contains over 10,000 book titles, hundreds of periodicals and videos, plus memorabilia and clippings, technical manuals, historical photographs and much more. A volunteer staff is dedicated to helping researchers and historians all over the world utilize these resources in their work.
Admission to this mecca of aviation is just $11 for those over age 13; with senior citizens, active military and veterans getting in for just $9. Admission for children ages four to 12 is $6, and those age three and under are free. The museum is open Monday through Saturday from 10:00 a.m. to 5:00 p.m. and on Sundays from 12:00 to 5:00 p.m.

Other Denver attractions
If museums and other walk-through experiences are your thing, Denver has several to choose from. Consider a stop at the Denver Botanic Gardens, Denver Art Museum, Denver Museum of Nature and Science, Denver Zoo and Museum of Contemporary Art Denver.
As the largest city within 500 miles, Denver is also the area's cultural center. Denver Performing Arts Complex offers 10 separate spaces and regularly hosts touring productions, as well as productions on their way to Broadway. The Colorado Symphony, Colorado Ballet and Opera Colorado all reside at the complex, too.
Denver is home to Colorado's several professional sports teams. Athletes play soccer, hockey, lacrosse, football, basketball and baseball at three area venues. Fans of any or all of these hometown teams won't be disappointed by the sports scene in Denver.
Denver also offers visitors endless dining options, from food trucks and outdoor cafes to casual neighborhood coffee shops, craft brew pubs, fine dining and more. The locals I talked with enjoy dining on northern Italian food served at Brio Tuscan Grille in the Cherry Creek shopping center as well as the seasonally available fresh seafood at The Oceanaire Seafood Room in the downtown theatre district.

Accommodations
Denver has over three dozen hotels including all major chains, as well as boutique hotels and bed-and-breakfast inns. One standout among the bunch is the pop-culture themed Curtis Hotel, which is a local favorite as well as a popular choice for out-of-towners.
With 13 guestroom floors each highlighting a separate theme (like "Sci-Fi" and "Big Hair"), and cartoons playing on the lobby television, the hotel is fun, stylish and well appointed. 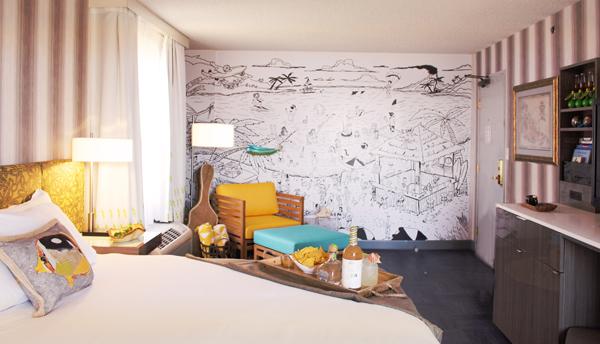 Local airports
If you have more than one day to see the area, fly into Fort Collins-Loveland Municipal (KFNL) and rent a car. You can use KFNL as your base of operations, as it's only an hour's drive south to Denver. There are lots of places to stay near KFNL—and if your time permits, U.S. Highway 34 will take you right into Rocky Mountain National Park via the nation's highest paved highway.
You can find good fuel prices north of the big city at both Erie Municipal (KEIK) and Vance Brand Airport (KLMO) near Longmont, Colo., and two good on-field restaurants at Rocky Mountain Metro (KBJC): Blue Sky Bistro and Runway Grill. Denver/Centennial (KAPA) is more of an executive airport located 15 nm southeast of downtown in Englewood, Colo., and is under Class B.
With so many options for air travel and so much to do once you arrive, Denver is a true must-see city. Start your visit with a tour of the world-renowned Wings Over the Rockies Air & Space Museum, and spread your wings from there.
Heather Skumatz is managing editor for Cessna Flyer. Send questions or comments to .