As my wife says when we have a collision in the kitchen (usually I’m mixing the cocktails and she’s making snacks), “Why don’t you watch where I’m going?”

“Sorry, but you didn’t announce your position and intentions.”

Similarly, I recently received a vivid lesson about watching out for conflicting traffic, specifically where my eyes should be looking while in the landing pattern.

And surprisingly, the lesson I learned is that I really don’t need to watch where I’m going. As with my dear wife, I have to watch where the other person is going.

Thousands of words are written each year about setting up for a good landing, beginning with your entry into the pattern through lining up on final.

It’s all standard stuff: be at the correct altitude and speed; set yourself up at the right distance from the runway as you turn on the downwind leg; be aware of the wind for any drift correction.

Maintaining that perfect distance down to the runway means you could glide to a landing if you suddenly become a glider.

Fly parallel to the runway until the end of the runway is 45 degrees behind you (that’d be on your 7:30 position) and then make your turn to base leg. If you’re getting low or too high, adjust the power as needed. Use flaps as needed.

On base leg, try to visualize the final glideslope extending from your aim point on the runway to a point in space where you will turn to final. Then you’ll be set up for an easy, stabilized approach.

Yup, I was doing all that as I approached Sky Manor Airport (N40) in New Jersey on a crisp December afternoon. As I rolled out onto final, I knew the landing was going to be a cinch.

My glide path was taking me straight to my aim point like a train on the rails; the speed was right. I was lined up with the runway and had cleared the dreaded high voltage power lines just east of the field.

Suddenly, I heard the roar of another airplane engine revving up, even through my extra-cushiony headset. Looking to my right, I saw another aircraft parallel to me and climbing. He was obviously going around.

There’s no doubt my instructors told me repeatedly as a student, “Ya gotta have your head on a swivel, see and avoid, watch for traffic, don’t text and fly, be nice to your sisters,” and all that.

However, in the landing pattern, the lesson always seemed to focus on hitting the numbers and squeaking the tires on that perfect touchdown spot. Yet making a great approach and pattern doesn’t mean much if you have a midair collision while doing it.

Later, while discussing my kinda-close encounter with E.C. Moore, my flight instructor at Sky Manor, he told me, “I don’t need to remind you to look toward the field; you’ll do enough of that naturally. I really want you to look where other pilots may be coming from.

“When you’re on a left base, take a good look to your right and see if anyone else is already on final. Ya know, some of these guys make airline patterns with a three-mile long final approach,” he explained.

“The same goes for every point in the pattern. Think how other pilots may be entering and flying the pattern. Look away from the airport on downwind to see if anyone is outside your pattern or making a long base leg entry.”

“And don’t forget to look above and below you, as best you can.”

“I always urge all pilots to follow the same procedures in the pattern, no matter what they fly, from a C-120/140 to the latest turbocharged carbon fiber creation. If we all get in line, there will be fewer surprises.”

Since my close encounter, I’ve been spending much more time looking in the directions where other aircraft may be coming from. I know where the runway is; it’s not going anywhere. A quick glance tells me if I’m too high or too low while on the downwind or base legs.

I want the pattern to be perfect, of course—but I don’t need to keep my eyes glued continually on my aim point. It’ll be there when I turn final.

It would be ideal if pilots always had two pairs of eyes: one for flying the pattern and maintaining the correct distance and altitude, and another pair to look for conflicting traffic.

That’s why it’s good to have a friend or spouse along on a flight.

I tell my pilot friends who fly with me, “I’ll fly the pattern. You look for other aircraft in the pattern.” And I’ve taught my wife, who’s not a natural aviatrix, how a landing pattern works and where she should look for traffic.

I always feel better having a second pair of eyes in the plane with me. (And maybe they’ll pick up the lunch check as well!)

I know I should have been more alert to traffic during my close call, but it would’ve been nice if the pilot I encountered had announced his presence in the area. And that brings up another point: are we relying too much on position announcements at uncontrolled airports and not enough on really looking for traffic?

A few days later, I told my close encounter story to another veteran pilot hanging around the airport. He responded, “That’s why I never use radios. Everyone assumes there’s no one else out there except for the ones they hear on the radio.”

“I always trained my students without radios, so they get used to really looking for traffic,” he continued. “Not just taking a glance, but really looking.”

There have been a number of accidents in which pilots identify an aircraft calling on the radio with “traffic in sight,” only to tragically learn that it was not the only aircraft in the area. As my friend with little faith in radios said, “The one midair collision we had around here involved two aircraft both announcing their positions on the radio… and they still collided.”

Now, as a big believer in radios, I understand his perspective, but just to a point. I always find it helpful to hear other pilots approaching before I can see them.

So, after much thought, I’ve adopted a new Reaganesque philosophy: trust, but verify. Now, at all times while flying, but especially when approaching to land, I make it a habit to:

• Listen on the radio and make a mental picture of the traffic.

• Remind myself that any aircraft I hear calling and then spot visually may not be the same, unless they’re so close I can actually see the color and type, or N-number.

• Assume there are other aircraft around that are not broadcasting.

• Announce my own position and intentions.

Now, if I could only get my wife to announce her speed and position while in the kitchen. 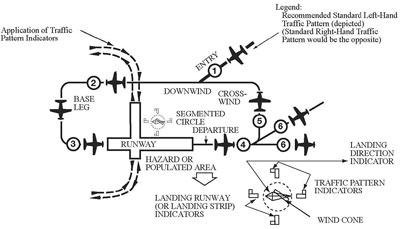 Dennis K. Johnson is a writer and a New York City-based travel photographer, shooting primarily for Getty Images and select clients. He spends months each year traveling, flies sailplanes whenever possible, and owns a newly restored two-seat aircraft. Send questions or comments to .