Less More
2 years 8 months ago #1676 by KENT VANDENBERG
Replied by KENT VANDENBERG on topic Cracked Oil Sump
Thanks Steve, and Steve. Yes, I thought that, with 163 hours on the engine since overhaul, I had survived the infant mortality period. WRONG! Whether infant or senior, the chances are always there, no matter how comfortable you get with an engine. This I've always known but it's now in the forefront.

This incident has worked me over emotionally, as you say. I've had about two months to think it over, which doesn't help. I'm 64, retired now four years, can do pretty much anything I want to do, good health, etc. - life is good. So I considered if this was the time to give up flying since I would not want another airplane incident to take away all that I have worked a lifetime for. But that's giving up on life. I am looking at this as an opportunity to be a better pilot and have a better airplane.

I'm going to take some glider training, in the event my airplane someday turns into a glider. I'm going to get inertial reel shoulder belts installed. Don't have them in my '64, and it's been on my "list of things to do", but now it's mandatory. I could have got really messed up if the outcome was different. I'm not going to fly at night unless there is a very compelling reason, or the time remaining is short. This might mellow with time. For now, I reserve the right to choose the rock I'm going to hit - easier when it's not dark (LOL). I'm going to modify my flight profile in at least two ways. I'm not going to always go direct if I can go slightly farther out of my way to be over more airports or better roads. I'm also going to avoid the comfortable 500 FPM cruise descent. I will now stay high for as long as possible, and when it's time, slow down, full flaps, and dive down keeping some engine power on. And I'm going to be much more aware of where is the nearest airport. Easy to get lulled away from doing that until you encounter a time when that may have been urgently needed.

These kinds of things will get your attention for sure.

I just told my mechanic that I didn't think my airplane was going to mechanically kill me but it just might emotionally kill me. LOL.

I think the advice Steve Ells gave you is great. After my oil loss at 10,000 feet in IMC the engine was inspected for any metal in the filter and pan and nothing was found.

Less More
2 years 8 months ago #1669 by STEVE ELLS
Replied by STEVE ELLS on topic Cracked Oil Sump
Hi Kent;
Thanks for taking the time to post all the information about your engine. Glad that the engine wasn't damaged. Things could have gone down a much more stressful path.
The inside of the engine looks pristine.

Kudos to Western Skyways for taking care of you.

I hope you're back in the air soon,

My ordeal with the cracked oil sump is finally winding down. Here's a synopsis and pictures.

The engine was removed by an A&P mechanic and shipped via ground transportation to Western Skyways as a warranty return.

I personally witnessed the opening of the engine at the Western Skyways factory in Montrose, CO on Monday, September 23. The diagnosis by Western was a metallurgy failure of the pan. There was no evidence of anything coming apart internal to the engine and no strike marks were found on the inside of the pan in the area of the crack. The oil filter was removed, opened, and inspected for metal with none found. No metal inside the pan, and no metal found when probing around in the engine case.

The explanation I was given by the factory is as follows:

The oil pan has a concave, oval shaped formed area in the bottom of the pan which is needed to provide clearance for the retractable nose gear of the Cessna 210. The formed area, all things being equal, can form a stress riser or weak area in the pan if there is a manufacturing or metal defect. That the crack initiated on the radius of the formed area supports this postulation. There is sufficient clearance in the airframe of the Cessna 205A such that an oil pan with the formed area is not required (no retractable nose gear). The Continental IO-470-S engine is allowed to be fitted with a "straight pan", ie, one without the formed area. The repair was to fit an approved oil pan with does not have the formed area, thus eliminating a source of cracking.

The engine was test run for two hours at Western Skyways per their normal acceptance procedure and all parameters passed. They said they would open the oil filter and inspect for metal after the test run but I was not there is witness that operation so I assume it was done and checked okay. The engine will be arriving back to the home base airport this week and thence installed. 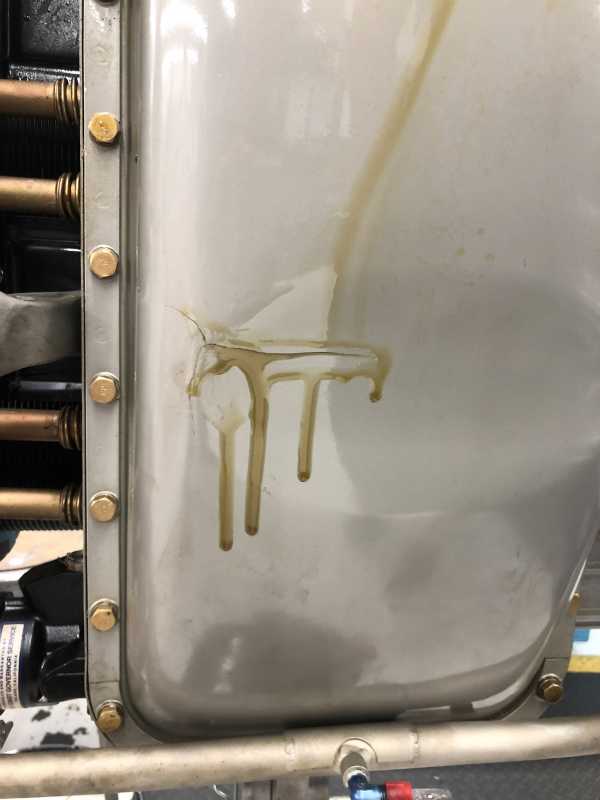 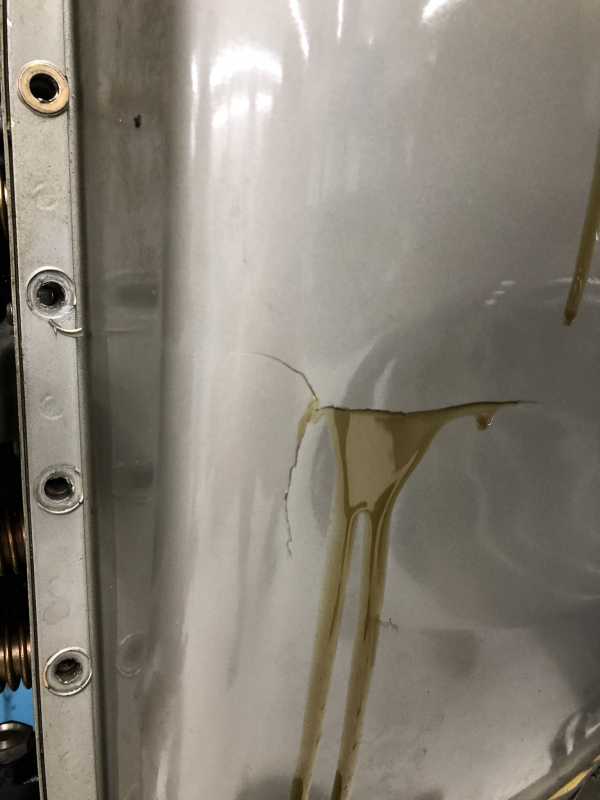 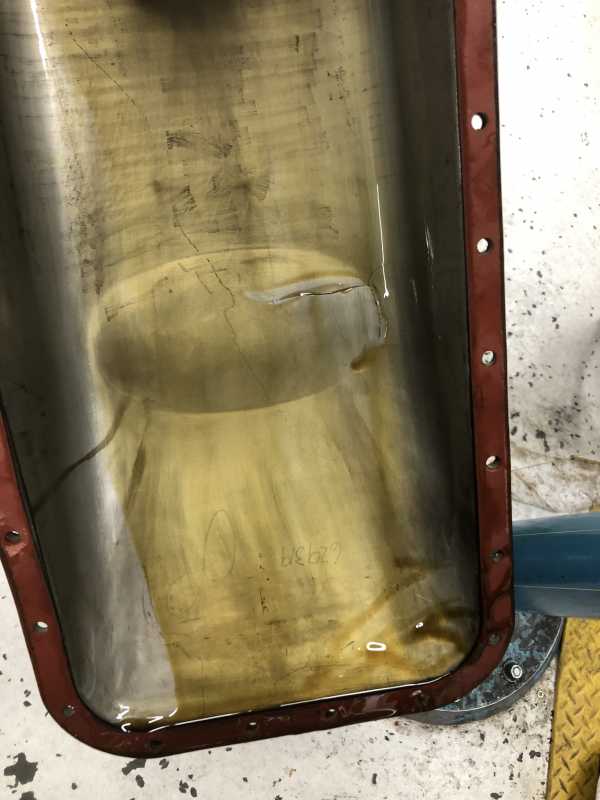 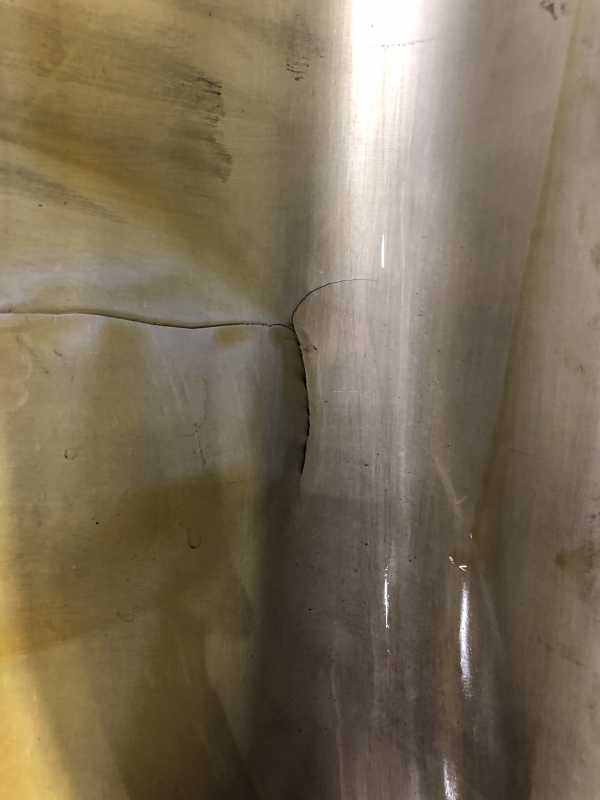 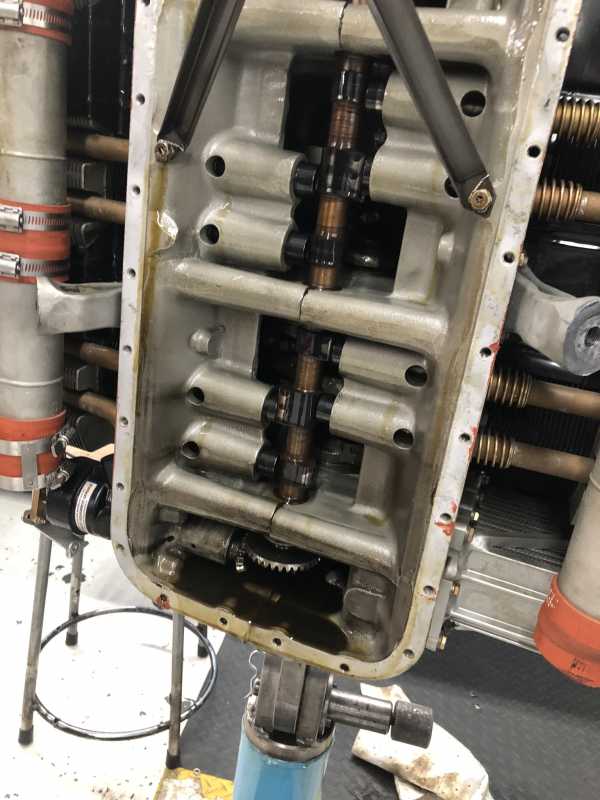 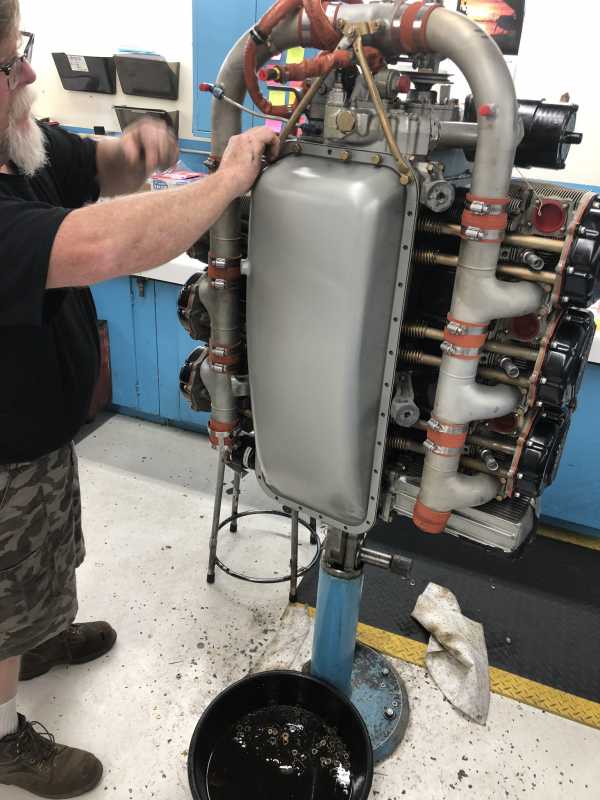