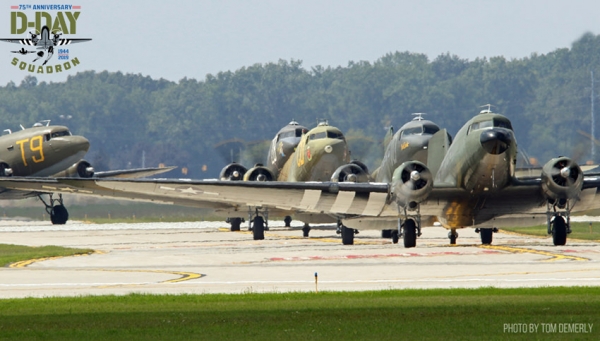 The D-Day Squadron is the American contingent participating in the Daks Over Normandy flyover crossing the English Channel to commemorate the 75th anniversary of D-Day on June 6, 2019. The skies will be filled with dozens of meticulously restored C-47 aircraft and hundreds of paratroopers billowing through the sky in authentic Allied uniforms and World War II military-style parachutes.

Daks Over Normandy will be the largest assembly of these authentic War aircraft and paratroopers since that fateful day on June 6, 1944, all to honor the service and sacrifice of the citizen soldiers who risked life and limb to bring about the beginning of the end of the War in Europe. Aircraft from around the globe will participate in events both before and after the June 6 flyover, with community events and static displays in the United Kingdom and France for the education and enjoyment of the public.

Volunteers of the D-Day Squadron will make an epic journey across the ocean with a fleet of American C-47s to help fill the skies once again with the sight of freedom. The citizen soldiers and aircraft that helped bring about an end to World War II will be honored in this historic tribute.