Arsenal of Democracy Opens May 24 at EAA Aviation Museum 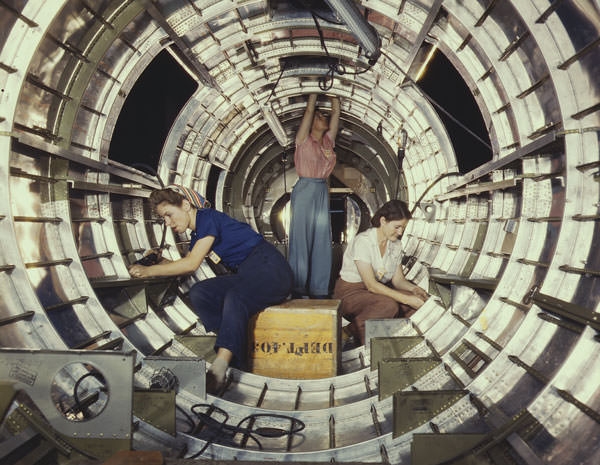 EAA AVIATION CENTER, OSHKOSH, Wisconsin — (May 21, 2018) — The EAA Aviation Museum in Oshkosh on May 24 opens a new special exhibit – Manufacturing Victory: The Arsenal of Democracy, presented by national touring exhibit sponsor HP with additional support provided by Citi. Produced by The National WWII Museum in New Orleans, the exhibit follows the industrial journey that took the United States from a nation perilously unprepared for war to a global superpower that led the Allies to victory in World War II.

During the war, a sense of civic duty and responsibility united the nation and fueled America’s war effort like nothing before or since. American citizens stepped forward to fulfill the jobs demanded of them, and they excelled beyond all expectations. However, the U.S. mobilization on the home front actually began before the country was officially involved in the conflict.

President Franklin D. Roosevelt addressed the nation on December 29, 1940 – a year before Pearl Harbor – declaring, “We must be the great arsenal of democracy. For us, this is an emergency as serious as war itself. We must apply ourselves to our task with the same resolution, the same sense of urgency, the same spirit of patriotism and sacrifice as we would show were we at war.”

Roosevelt gave the arsenal concept a democratic meaning that saw every man and woman as a vital partner in the war effort regardless of where they worked. United by the Japanese attack on Pearl Harbor, Americans in factories, farms and businesses ceaselessly worked with ingenuity and spirit to create an unprecedented arsenal of military resources.

“Civilians on the home front who worked to assemble America’s arsenal of democracy were essential to securing an Allied victory,” said Dr. Keith Huzen, exhibit curator and the Samuel Zemurray Stone Senior Director of Research and History at The National WWII Museum. “Their stories serve as a reminder of what patriotism truly means.”

The 1,500-square foot exhibit includes compelling artifacts, photographs, oral histories, and interactive audio-video components that immerse the visitor in the story of America’s mighty industrial war engine. The exhibit debuted at The National WWII Museum in 2014 before embarking on a national tour to expand access and educational opportunities across the country.

“EAA’s mission within our museum is to tell the stories behind the big story to grow participation in aviation,” said Bob Campbell, EAA Aviation Museum director. “This traveling exhibit adds to the wealth of stories of flight, achievement, and sacrifice that have always been part of the museum’s Eagle Hangar and with the current nose art exhibit from the Commemorative Air Force.”

Manufacturing Victory: The Arsenal of Democracy will be on display at the EAA museum through August 6 and is included with regular admission. See artifacts and images from the exhibit and learn more about America’s arsenal of democracy at manufacturing-victory.org.

Hewlett Packard Enterprise is an industry leading technology company that enables customers to go further, faster. With the industry’s most comprehensive portfolio, spanning the cloud to the data center to workplace applications, our technology and services help customers around the world make IT more efficient, more productive and more secure.

The National WWII Museum tells the story of the American experience in the war that changed the world – why it was fought, how it was won, and what it means today – so that future generations will know the price of freedom, and be inspired by what they learn. Dedicated in 2000 as The National D-Day Museum and now designated by Congress as America’s National WWII Museum, it celebrates the American Spirit, the teamwork, optimism, courage and sacrifices of the men and women who fought on the battlefront and served on the Home Front. For more information, call 877-813-3329 or 504-528-1944 or visit nationalww2museum.org.