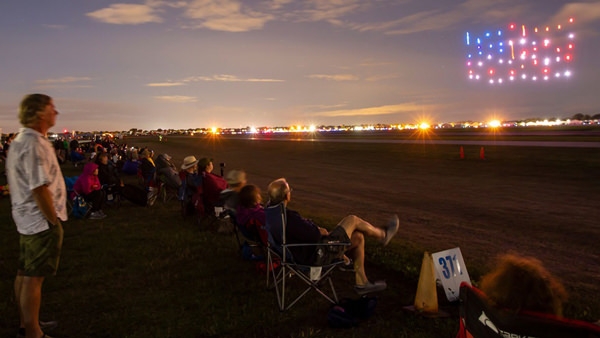 Like electric candles on AOPA’s birthday cake rising into the night sky, a fleet of no fewer than 80 drones will put on a spectacular show at each of our 2019 Fly-Ins.

The Great Lakes Drone Company, producers of custom-crafted displays using customized drones and specialized software to control the aerial display, will provide this fittingly festive aeronautical alternative to fireworks. The Michigan company was among the first in the country to earn FAA waivers to create light shows with dozens of drones flying in digitally choreographed formations.

Founded in 1939, AOPA grew into the world’s largest aviation organization, connecting pilots across the country and working together over the years to preserve our freedom to fly. The first of three 2019 AOPA Fly-Ins celebrating AOPA’s eightieth anniversary will be held at AOPA’s home base in Frederick, Maryland, on May 10 and 11. The drones will fly the Eightieth Anniversary Star Dance on May 10, the closing act for a lineup featuring aerial demonstration including the D-Day Squadron and a short takeoff and landing (STOL) invitational.“Drones are ever-evolving and really becoming a valuable piece of our aviation ecosystem with technology to help advance several industries,” said AOPA Senior Director of UAS Programs Kat Swain. “It’s an exciting time to partner with Great Lakes Drone Company and have them bring the latest in drone entertainment and light shows to our events.”

Great Lakes Drone Company drones also will be featured performers at the other two AOPA Fly-Ins this year, flying June 21 in Livermore, California, and Sept. 13 in Tullahoma, Tennessee.