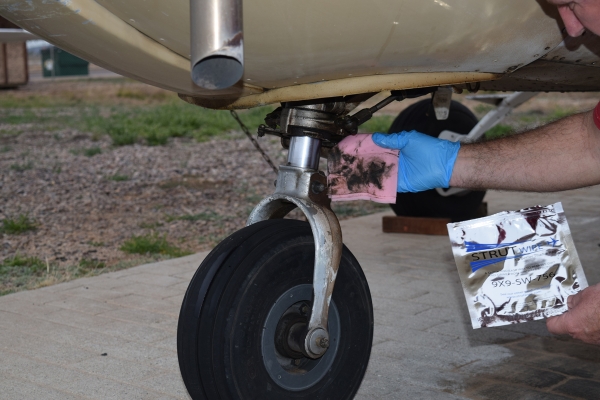 Nothing is worse than walking toward your aircraft and noticing a stream of black liquid running down your landing gear strut. It always happens when you need to fly somewhere.

But cleaning struts is such a pain. You must carry around a rag and hydraulic fluid. How do you store a can quart of non-resealable hydraulic fluid on your aircraft? Most people use a dispenser, which leaks all over the place.

That’s why people tend not to clean their aircraft struts—and it ends up costing the owner in time and money to repack the struts.

Leaking struts derive from sand, dirt, water and ice adhering to the strut and being forced up into the O-ring or orifice seal during landings, like a hydraulic press.

This contamination eats away at the rubber seal until it can no longer hold the pressure inside the strut, which is the weight of your aircraft. This is the reason the maintenance manual instructs aircraft owners and maintenance personnel to wipe down aircraft struts prior to flight, refueling and before lowering the aircraft off jacks.

That’s why K&M Industry came up with Strutwipe, a lint-free cotton wipe, pre-saturated with top-of-the-line MIL-PRF-83282 or MIL-PRF-5606, the same hydraulic fluid in your aircraft struts. The cotton wipe is woven with ridges to trap dirt and grime.

Strutwipe will be exhibiting at EAA AirVenture in Hangar A, Booth 1156. Come by and pay us a visit. Present your FAA certificate, and you’ll receive a Strutwipe sample for the road.