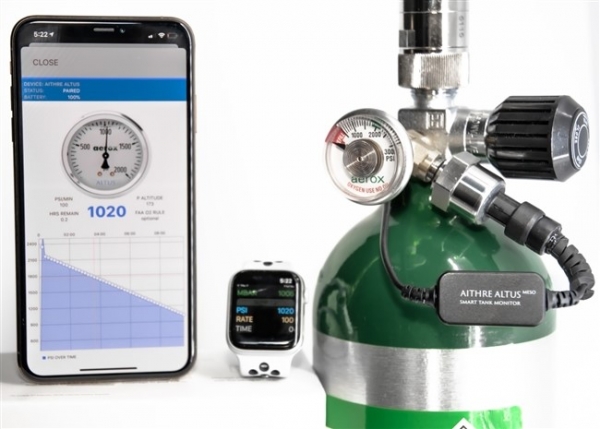 distributor for the entire Aithre product line. Under the terms

of the agreement, Aerox will be the exclusive bundler of the

for new portable oxygen systems. Aithre and Aerox will also

cobrand the Aithre iOS tank monitoring app that links the

Altus Meso to any iOS device.

Aithre and Aerox have announced a special price for the Altus Meso of $149.99 installed on any

can receive a ready-to-go, integrated package. The Altus Meso can also be ordered and

installed separately from Aerox and other authorized dealers for $195.00.

and time remaining of any portable oxygen tank. The Meso weighs just a few ounces and is

plugged into any oxygen tank using the included high-pressure Tee-fitting. The Meso can be

powered directly with a USB port. A battery pack is included and can be attached to the outside

of the tank and is recharged using a standard USB cable.

knowledge of the status of their oxygen system. A built-in pressure altimeter allows reminders

to the pilot when oxygen use is required by FAA regulation, and includes a reminder to shut off

the oxygen tank after landing. The Meso wirelessly integrates with avionics using the Shield

EX-3, which is being installed in factory Vans, Sling, and Glasair aircraft. Also available is

of sale to make it easy for users to purchase and to install. We are proud of our relationship

bundle the Altus Meso system into their purchase of any Aerox portable oxygen system,” said

Scott Ashton, President and CEO of Aerox. “We both believe that a portable oxygen system is

the single most effective “bolt-on” modification a pilot can make to their airplane. Even at

altitudes as low as 7,000’, having oxygen on board can make pilots and their passengers more

pilots are using technology to make flying safer and to enhance situational awareness. That

using connected technologies such as the Altus Meso, Shield CO detectors, and the Illyrian

Aithre, prounounced “eye-thra” is Greek for “blue skies”, or “pure air”. Aithre was founded by

Jim Ruttler, who serves as President. Jim is a patent attorney and has an MBA and a bachelors

degree in neurobiology. Aithre technology was developed to improve the safety of flight at high

altitudes where oxygen is low and risks are high. Through innovation, we've created wearable

oximeters, portable and installed CO detectors, and oxygen pressure monitors that are enabled

business and general aviation, helicopters and EMS, and . Since 1981 it has provided the

aviation industry with innovative solutions for all oxygen needs, and it provides a complete line

of systems, parts, and accessories for fixed wing and helicopter OEMs. Aerox ® Aviation

Oxygen Systems, Inc. was the originator of the long duration oxygen system in 1981 by creating

a product that offered duration six times that of a standard system. Aerox’s trademarked product

for use in aviation. Aerox products are available from

approved distributors and by visiting www.aerox.com.