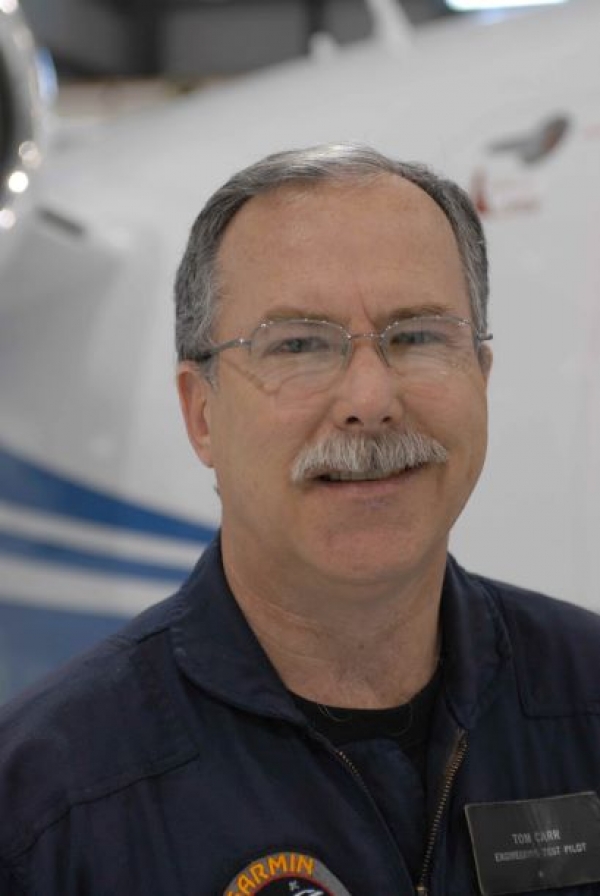 Garmin ® International Inc., a unit of Garmin Ltd.
(NASDAQ: GRMN), today announced its Director of Flight Operations and Chief Test Pilot, Tom Carr, has received the prestigious Society of Experimental Test Pilots’ (SETP) 2020 Iven C. Kincheloe Award for his outstanding professional accomplishment in the conduct of flight testing. SETP presented the award to Carr last week during a virtual awards ceremony that was held in place of its annual gala.  The Iven C. Kincheloe Award was established in 1958 in memory of the veteran flight test pilot and U.S. Air Force Korean war ace. The Kincheloe Award honors test pilots who have made exceptional contributions to an aerospace program and is the most honorable recognition among the society. “From the day Tom started at Garmin, he has dedicated himself to growing our business and developing a team of passionate and talented flight test professionals and in doing so, he has built a world-class flight department,” said Phil Straub, executive vice president and managing director of aviation. “His dedication to the advancement of flight testing, along with his perseverance and pioneering vision, have played a vital role in bringing innovative Garmin products to market and into the hands of our customers, all of which further illustrates why he is extremely deserving of the Iven C. Kincheloe Award.”

Carr was honored with the Kincheloe Award in recognition of his achievements as an experimental test pilot during the industry-first Garmin Autoland flight test program. He has flown Autoland development flights on the Columbia 400, Piper M600 and the Cirrus SF50 Vision Jet and flew as test pilot in hundreds of approaches and fully-automated landings. These tests were conducted as part of the Federal Aviation Administration (FAA) certification of Garmin Autoland, which was achieved on May 18, 2020. The award-winning Autoland system has since received FAA and European Aviation Safety Agency (EASA) certification on several additional aircraft types. Serving as director of flight operations and chief test pilot at Garmin for 17 years, Carr has over 42
years of experience in experimental flight test. He holds an Airline Transport Pilot (ATP) certificate with 14 type ratings and is rated for single-engine and multi-engine airplanes, seaplanes and gliders. His flight experience spans 192 different aircraft types ranging from gliders to four-engine jets. Carr has more than 12,000 hours as Pilot-in-Command (PIC), including more than 5,000 hours in the conduct of experimental flight tests. At Garmin, Carr oversees flight operations in Olathe, Kansas and Salem, Oregon and has flown numerous avionics development and certification programs, including the G1000 ® and G5000 ® integrated flight decks, GFC™ 700 autopilot, Synthetic Vision Technology (SVT™)
and Garmin Electronic Stability and Protection (ESP™).

Carr graduated from the University of Kansas with a B.S in Aerospace Engineering. He also has a M.S in Aviation Human Factors and a law degree. Prior to Garmin, Carr was a senior engineering test pilot at Beech Aircraft and Raytheon Aircraft in Wichita. At Raytheon, he flew research and development, as well as certification flight tests, specializing in aircraft stability and control, envelope expansion, high angle of attack and spin testing, finishing his career there as Hawker Horizon chief test pilot. Previous Iven C. Kincheloe Award recipients include some of the aerospace and aviation industry’s most accomplished and recognized individuals in experimental and exploration flight testing, including those who contributed to the NASA Space Shuttle and Apollo space programs.