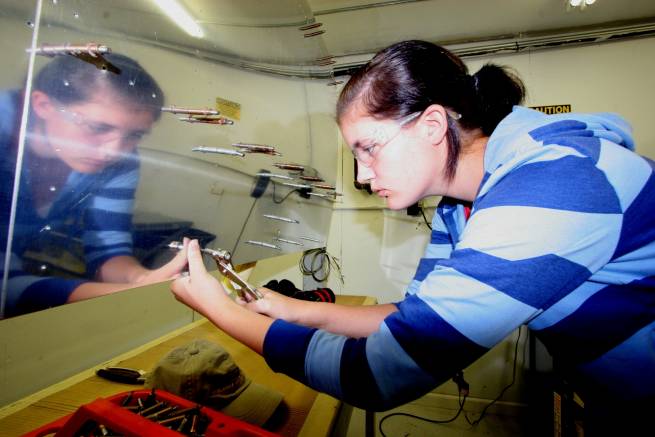 WASHINGTON, D.C. – In a collaborative effort to promote Science, Technology, Engineering and Mathematics (STEM) education and stimulate student interaction in aviation and manufacturing, Build A Plane and the General Aviation Manufacturers Association (GAMA) announced today a nationwide STEM educational competition.  The winners of this competition, eight children total, will receive free trips to the Glasair Aviation facilities in Arlington, Washington to build two Glasair Sportsman aircraft. Participating in Glasair’s well-known “Two Weeks to Taxi” program, students will build the two Sportsman aircraft starting June 17, 2013. GAMA member companies, along with Glasair Aviation are generously donating technical expertise, workspace, aircraft equipment, and supplies to the competition. The completed aircraft will be professionally test flown with the goal of flying the aircraft to and displaying it at this year’s AirVenture 2013 in Oshkosh, Wisconsin.

“GAMA and Build A Plane’s design and build competition targets our future aerospace workforce with the goal of engaging and educating young people through innovative STEM outreach efforts,” said Pete Bunce, President & CEO of GAMA.  “This competition will give students the opportunity to explore general aviation and all that it has to offer.  It will encompass our industry’s need to grow engineers, maintenance professionals, as well as pilots.  As our world faces some very serious economic challenges, we need to expose young people to the exciting and rewarding careers that await them in the aerospace industry and ensure they have the tools they need to succeed.”

Schools interested in this challenge will be issued complimentary “Fly To Learn” software which provides tools for teachers to guide students through the process of building an aircraft on a computer.  Each high school will select one design that will compete in a virtual fly-off which will score aerodynamic and performance parameters.

“This is such an amazing competition because it engages high school students aeronautically, in a way that is unparalleled, these are real airplanes the kids will be building,” BuildAPlane’s Lyn Freeman points out, “and you can image how exciting it will be when the kids get to participate in an educational competition like this and in the end, see their work actually fly!”

Judges for the competition will be engineers from GAMA member companies and the top two schools will each be allowed to send four students plus their teacher and a chaperone to Glasair at no charge.  Each team will receive round trip airfare, transfers, hotel, all meals and field trips to visit the nearby Boeing Aircraft factory and Museum of Flight.

The Glasair Sportsman 2 + 2 is a metal and composite aircraft that seats four adults. Sold as a kit, the aircraft can, with factory assistance, be assembled and taxied in only two weeks. They are usually flown by the end of the third week. “The sense of accomplishment a builder gets after two weeks is phenomenal,” said Nigel Mott, President of Glasair. “Over 160 Sportsman have already flown and we expect that the eight high school students selected to build two more will develop a sense of achievement that will enhance their entire lives.”

High schools who wish to enter the competition should call Katrina Bradshaw at 804-843-3321 immediately as space in the competition is limited.  For more information about the organizations involved, please log onto BuildAPlane.org, GAMA.aero, GlasairAviation.com or FlyToLearn.com.

(Glasair Sportsman): Two Glasair Sportsmen will be built in the Two Weeks To Taxi Program this summer by eight high school students.