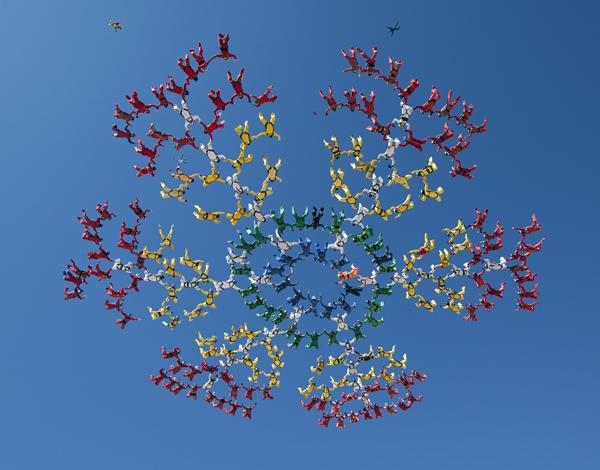 The Skydiving Hall of Fame based in Fredericksburg, Virginia, will organize the 108-person jump team for the record attempts sanctioned by the Federation Aeronautique Internationale (FAI), which is the official organization that maintains the world's aviation-related records. The teams will practice and prepare with record attempts at Skydive Chicago in Ottawa, Illinois, before the scheduled record attempts on July 22 and 24 at Oshkosh (weather and conditions permitting).

"Skydivers have been part of the EAA AirVenture air show for decades, but the opportunity to have a world-record attempt at Oshkosh is something unprecedented here, and very exciting," said Rick Larsen, EAA's vice president of communities and member programs, who leads the AirVenture event organizing team. "The Skydiving Hall of Fame is bringing the best of the best in their community to Oshkosh, matching the standard of performers that have made the AirVenture air show a true all-star event."

The Skydiving Hall of Fame team, known as the Eagles, will jump from as high as 20,000 feet from its Short SC.7 Skyvan and deHavilland DHC-6 Twin Otters to begin their record attempts. Any record would then be confirmed by FAI and its U.S. representative, the National Aeronautic Association (NAA).

"These seasoned skydivers, who are among the best in the world, face enormous challenges," said James F. (Curt) Curtis, president and CEO of the Skydiving Museum & Skydiving Hall of Fame. "To achieve an FAI world record while performing a high-profile professional exhibition requires extraordinary skill, talent and focus. But the opportunity to attempt this at Oshkosh during AirVenture week is a unique moment for our community."

About the Skydiving Museum & Skydiving Hall of Fame

The purpose of the Skydiving Museum is to recognize and promote the sport of skydiving through public education and awareness; recognize the contribution to skydiving by its participants, suppliers and supporters; capture forever the history of the sport via its events, equipment and personalities; and enhance aviation safety. Established by the Museum in 2010, the Skydiving Hall of Fame recognizes and honors those who, through leadership, innovations and/or outstanding achievements have defined, promoted, inspired and advanced skydiving at the highest and sustained levels in the past present, and for future generations of skydivers. More information on the museum and its programs is available at skydivingmuseum.org.