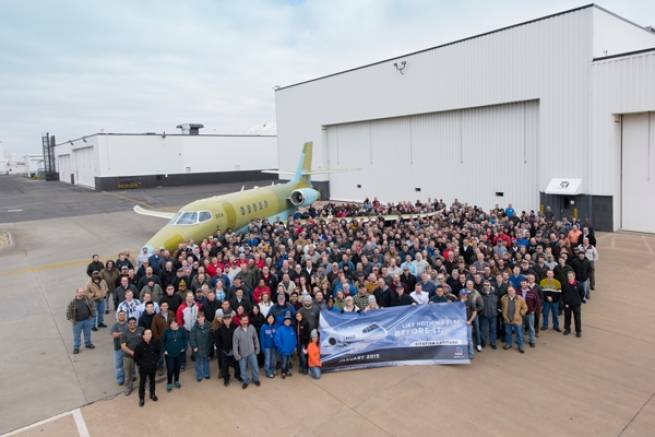 WICHITA, Kan., Jan. 29, 2015 – Cessna Aircraft Company, a subsidiary of Textron Aviation Inc., a Textron Inc. (NYSE:TXT) company, today celebrated the roll out of the first production Citation Latitude at the company's Wichita, Kansas manufacturing facility, just three years since being announced to the market. The assembly of the Latitude features a variety of technological advancements including the use of new automated robotics and ergonomically friendly tooling stations. Today's event is the latest in the aircraft's progression toward type certification by the Federal Aviation Administration (FAA), which is expected in the second quarter of this year.

"Our product investments extend beyond the design and performance features of the aircraft with innovations in our manufacturing processes," said Scott Ernest, president and CEO. "The Citation Latitude team has redefined what customers should expect from a business aircraft in this segment, while also redefining the aircraft build process."

The Citation Latitude certification program, which includes four flying aircraft, has accumulated 500 flights and 1,200 hours to date. The first fully-configured aircraft made its public debut at last fall's National Business Aviation Association (NBAA) Convention & Exhibition in Orlando, Florida and has since been touring the country for customer demonstration flights.

About the Citation Latitude
The Citation Latitude features an all-new fuselage, creating the most open, spacious, bright and refined cabin environment in the midsize category. With a flat cabin floor and six feet (1.83 meters) of cabin height, the Latitude has the widest fuselage of any Citation jet. Cessna's Clairity™ cabin-technology system ties into the Latitude's advanced avionics center to provide connectivity and entertainment to each passenger through their personal electronic devices.

The Citation Latitude accommodates up to nine passengers, can reach a flight level of 43,000 feet (13,106 meters) in just 24 minutes and has a range of up to 2,700 nautical miles (5,000 kilometers). It is designed with a powerful new environmental system, a pressurization system providing a 6,000-foot (1,829-meter) cabin altitude at the aircraft's maximum operating altitude of 45,000 feet (13,716 meters), an electrically-operated cabin door, Garmin G5000 avionics, two Pratt & Whitney Canada PW306D1 engines, and standard auto-throttles.

More than 6,750 Citations have been delivered to customers around the world since the first Cessna Citation business jet was put into service in 1972. Citations are the largest fleet of business jets in the world and have surpassed 31 million flight hours

For more information on the Citation Latitude, visit Cessna.com.