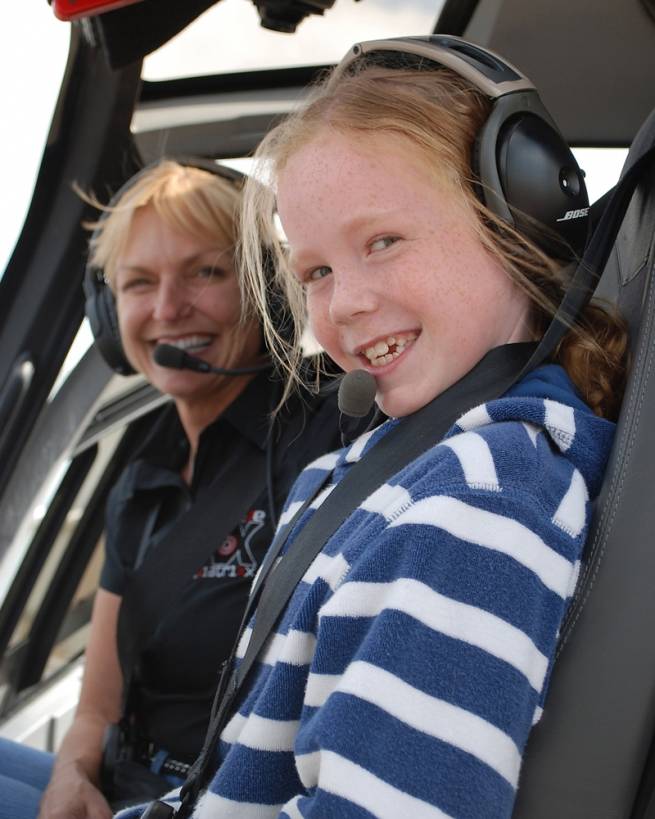 (ALBUQUERQUE, NM) As part of Women of Aviation Worldwide Week 2015, Del Sol Aviation, Cutter Aviation, and pilot Dianna Stanger are hosting an opportunity for girls and women of all ages to take a free ride in a private aircraft March 2-8 during the Fly It Forward Challenge at Albuquerque International Sunport.

In addition to the thrill of soaring over Albuquerque with private pilots in four and six seat airplanes or a helicopter, individuals and groups will learn about the history of women in aviation, discover what training is needed to fly an aircraft, and explore the many great career paths in aviation available for females. This is a rare opportunity for passengers to listen to the instructions given to pilots by the control tower, observe how a pilot uses the instruments in the plane and to see the beauty of Albuquerque from an altitude of under 2,000 feet.

"Women of Aviation Worldwide Week (WOAW) is truly an international event that creates an opportunity to impact females on a very large scale," said Stanger, who won the title of "Most Dedicated Female Pilot Worldwide" from WOAW in 2014. "Last year, there were 96 similar Fly It Forward events in 36 countries around the world, with volunteer pilots introducing 5,703 girls and women to flight in a small aircraft. Our team has been able to influence girls and women and encourage them to learn more about the joys of flying, and it makes me very proud as an aviator to be associated with the volunteers who have helped to build the future of aviation around the world."

The Fly it Forward Challenge event will take place on the general aviation side of Albuquerque's main international airport, KABQ. In conjunction with Del Sol Aviation, a local flight school, and Cutter Aviation, the sponsoring "fixed-base operator" (FBO) at the airport, free flights will depart throughout the week and take girls and women on an informative flight over the scenic area. To qualify for free "first" flights, individual and groups are strongly encouraged to read the registration information on the event's website, flywoaw.com.

Along with the daily free "first" flights will be a full week of aviation-related activities and displays for the public to enjoy. The U.S. Air Force's 58th Special Operations Wing based at Kirtland Air Force Base will potentially participate with static displays of various airplanes and helicopters, and Eclipse Aerospace with have one of their Eclipse 500 business jets on display. Other booths will introduce attendees to various aspects of flight training, aerospace education and aviation services.

Various aviation topics by pilots will be presented, including Eric Auxier, a Captain for a major U.S. airline, who will speak about the training required to become a professional pilot, and Ramona Cox, a "backcountry flying" expert who will explain how she flies her turbocharged Cessna 206 into tiny airstrips in the wilderness. Lieutenant Colonel Michele Boyko of the USAF will also be present on Saturday and Sunday to discuss flight safety.

In 2013, data from the FAA showed that just 6.6% of the 599,086 active licensed pilots in the United States were women. To increase that number, Women of Aviation Worldwide Week was created to raise awareness about the issue by celebrating the history of female civil and military aviators while promoting diversity in the skies. The WOAW community welcomes any man or woman, boy or girl, association, school or corporation who believes that the aviation industry would be improved with more women involved.

To learn more about this public event and find out how to register for free "first" flights, visit flywoaw.com You may also follow the event on Twitter as @woawABQ.