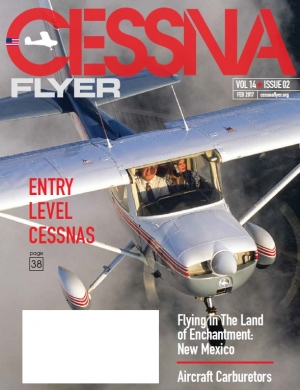 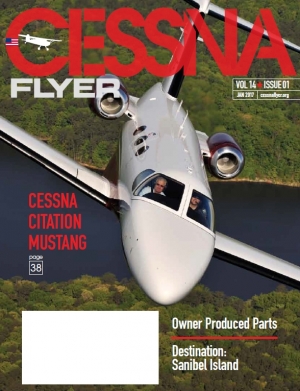 MONTGOMERY, ALA., Jan. 31, 2017 – Mike Disbrow, president of Hartzell Engine Technologies (HET), announced today that as a result of its asset purchase of C&D Associates in 2016, the company is now producing a line of South Wind replacement heaters under the Janitrol Aero brand.

“Our new Janitrol Aero brand heaters are FAA PMA approved and will not be affected by the FAA’s proposed AD on South Wind aircraft cabin combustion heaters,” Disbrow said.

“As written in the NPRM, along with some other inspections and tests, the AD will require a pressure decay test (PDT) on the South Wind heater’s combustion tube.

“For the tube to pass, it cannot have any leaks,” Disbrow explained.

“The FAA estimates that 90 percent of these heaters will fail the PDT,” he continued, “And, according to the AD, any tubes that fail must be replaced. The AD does not allow for any repairs.

“Should the owner-operator decide to replace the South Wind combustion tube, the AD also mandates that they repeat the compliance testing every 250 hours of heater time or every two years, whichever comes first,” he said.

Disbrow said that while the test is not difficult, there are only a limited number of aircraft maintenance facilities that are experienced and equipped to perform the required testing and compliance procedures.

Another challenge facing shops with regard to the PDT is that it is more difficult to conduct on-wing than on a bench.

“The FAA estimates that there are over 6,300 aircraft affected by this AD—we think that over 4,000 of those will be the affected 300- and 400-series twin Cessnas in the fleet,” Disbrow said.

“Even if some operators choose to disable their cabin heater, there are still thousands of piston singles and twins that will need to comply.

“If an owner-operator waits until the AD is issued and they fly-off the allotted 10 hours of heater operation time, there just won’t be enough capacity at all the heater shops to handle the deluge of South Wind systems needing testing and repairs,” he continued. “That will leave thousands of owner/operators likely facing next winter without cabin heat.

“These can be purchased and installed ahead of the AD and will not be affected by the proposed AD when it is issued,” Disbrow explained.

“By the time you factor in the cost of the South Wind heater AD testing and replacing the combustion tube and the periodic compliance testing, you are pretty much on par with the cost of our PMA Janitrol Aero replacement heaters,” he said.

“And any licensed maintenance facility can change out the heaters, which will save the owner-operator a lot of added aircraft downtime.”

Janitrol Aero replacement heaters can be purchased directly from HET or through one of its authorized distributors. Information can be found by visiting Hartzell.aero/contact/.

The NPRM containing a draft of the current AD is available at https://www.regulations.gov/document?D=FAA-2014-0603-0013.

For further information about Hartzell Engine Technologies and its products, go to Hartzell.aero. 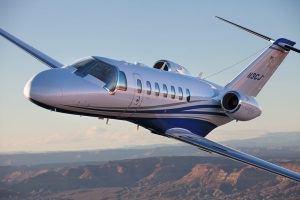 The first Citation jet, a Cessna Citation 500, was delivered to American Airlines in January 1972, where it was used for the development of the company’s training program. Since then, the Citation series has become the most popular line of business jets ever produced with more than 7,000 delivered to customers around the world. The worldwide fleet has amassed nearly 35 million flight hours.

“This milestone marking 45 years of industry leadership is really a celebration of the thousands of people through the years—customers and employees—who have made the Citation line of business jets the world leader,” said Kriya Shortt, senior vice president, Sales and Marketing.

“In terms of customer satisfaction, aircraft value and performance, precision design, production quality and lifecycle customer support, nothing comes close to what the Cessna Citation family offers the global marketplace.”

Citation jets are renowned for their ability to combine reliability, efficiency and comfort with advanced technology and class-leading performance.

The Citation series of business jets has evolved to offer an unmatched range of capabilities, systems and options that allow customers to expand their business reach.

The company’s latest Citations in development include the super-midsize Citation Longitude and the Citation Hemisphere, Textron Aviation’s entry into the large-cabin market. For more information about the Citation series and other Cessna aircraft, visit txtav.com. 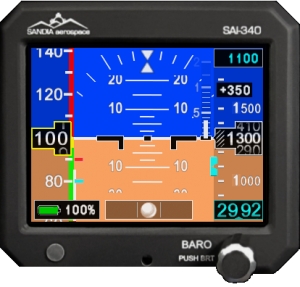 Jan. 12, 2017 –The FAA has granted Sandia Aerospace an additional TSO on its popular SAI 340 Quattro Plus multifunction indicator. In addition to attitude, altitude, airspeed and slip, the SAI 340 is now TSO’d for Instantaneous Vertical Speed, or (I)VSI.

Unlike a standard VSI that has a six- to eight-second lag, the SAI 340 gives virtually immediate vertical speed indications. The vertical speed is shown on the SAI 340 in both a tape and digital format. In addition to the (I)VSI, the new software version also adds an adjustable altitude bug.

The SAI 340 is a stand-alone attitude indicator that is ideally suited for standby applications with today’s glass cockpits. It is also suitable as a stem gauge replacement unit in older aircraft.

The SAI 340 has an internal battery that provides two hours of standby operation in case of loss of aircraft power. The lithium-ion battery is enclosed in a metal case and meets the requirements of RTCA DO-347, ensuring safe operation.

With the addition of the (I)VSI TSO, the SAI 340 now holds eight separate TSOs. Existing SAI 340 owners can arrange to get their units upgraded to the latest software by contacting the Sandia Aerospace service department at or by phone at 505-341-2930.

Sandia Aerospace is providing the software at no charge to existing customers—they only pay for the labor to install the software, recalibrate the unit and shipping charges.

Check out the SAI 340 Quattro Plus and Sandia Aerospace’s other products at sandia.aero. 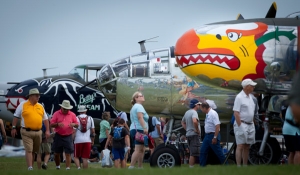 Each day of weeklong event has unique highlights and themes

EAA AVIATION CENTER, OSHKOSH, Jan.12, 2017 – Historic aviation achievements, legendary pilots and groundbreaking innovations will all be featured as some of the themes of EAA AirVenture Oshkosh 2017, held July 24-30 at Wittman Regional Airport in Oshkosh, Wis.

The events create a weeklong series of highlights for the 65th annual EAA fly-in convention. The fly-in annually draws an attendance of more than 500,000 people and 10,000 airplanes.

Among the themes schedule for each day are:

“EAA AirVenture Oshkosh is known as a full week of unmatched activities, unique airplanes and unforgettable moments, but these themes create unique highlights for each one of the seven days,” said Rick Larsen, EAA vice president of communities and member programs.

Larsen, who coordinates AirVenture features and attractions, added, “No place brings all this together in the same way as we do at Oshkosh.”

More details on these AirVenture theme days, as well as additional features and attractions, will be announced as they are finalized. 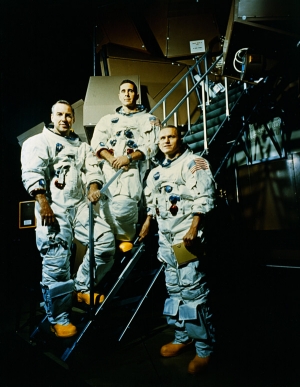 EAA AVIATION CENTER, OSHKOSH, Jan. 31, 2017 – Astronauts from the Apollo missions that put humans on the moon for the first time are expected to be at EAA AirVenture Oshkosh 2017, as the “World’s Greatest Aviation Celebration” commemorates the 50th anniversary of the Apollo program.

The reunion is expected to be the largest gathering of Apollo astronauts at Oshkosh since the memorable 1994 “Salute to Apollo” program that brought together 15 of the men who were the faces of the American effort to put men on the moon.

Many of the activities will be centered on AirVenture’s Apollo Day on Friday, July 28, which is highlighted by a major evening program at Theater in the Woods.

“A number of Apollo astronauts have already committed to the event, as have other people closely involved with America’s space program during that era,” said Rick Larsen, EAA’s vice president of communities and member benefits who coordinates AirVenture features and attractions.

“This will be a rare, unforgettable gathering of the people who met the challenge of flying to the moon and safely returning, representing hundreds of thousands of individuals who contributed to its success. You may never get another opportunity to see the people in person, up close, as you will at Oshkosh this summer.”

It is expected that crew members representing many of the Apollo missions will attend. Those who have already confirmed their attendance include Frank Borman (Apollo 8); Walt Cunningham (Apollo 7); Fred Haise (Apollo 13); Jim Lovell (Apollo 8 and Apollo 13) and Al Worden (Apollo 15).

Additional astronauts are expected to confirm their attendance in the coming weeks. Further details on events and schedules will be announced as they are finalized. 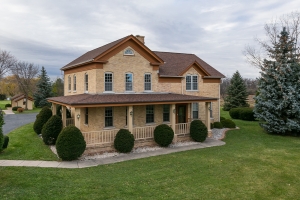 Aircraft Spruce & Specialty Co. is pleased to announce that it has purchased the former home of Paul and Audrey Poberezny in Oshkosh, WI and will make the home available to the EAA for tours and special events. The original stone farmhouse is over 100 years old and was Paul and Audrey's home from 1991 until his death in 2013. Located near Wittman Field, the 9 acre estate reflects the standards and culture the Pobereznys utilized in building the world's leading sport aviation organization, EAA, and the world's premier aviation event, AirVenture. This home hosted many of aviations leaders and icons, and countless aviation artifacts and photos representing the relationships and events that shaped Paul's remarkable life are on display throughout the home, providing insight into the lifetime passion and vision of one of aviation's greatest leaders. This is where Paul built airplanes, read about aviation history, and wrote countless letters and articles. As he often said, "There isn't a day that goes by that I don't say the word airplane".

Aircraft Spruce and the Irwin family have maintained a close relationship with the Poberezny family and EAA for over 50 years and is honored to have the opportunity to partner with the EAA to make this historic home available to EAA members and aviation enthusiasts in the years ahead. Contact EAA for details on visiting the Poberezny home beginning in the summer of 2017. 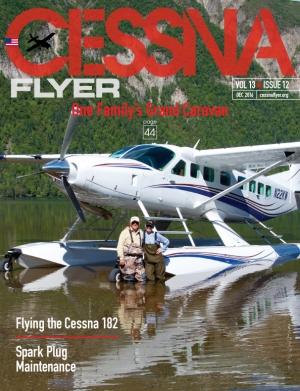 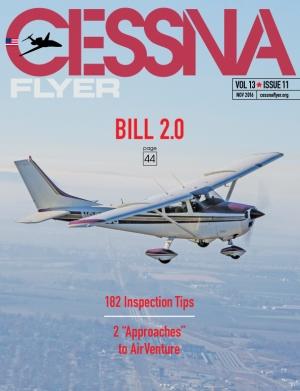