Q&A: Planning Ahead for Cooling a Larger Cabin During Another Hot Summer

I’d like some ideas for cooling off the cabin of my airplane because I don’t want to again go through anything like last summer. I live in the Southwestern United States, and as you know, the temperatures can top 100 degrees here during the heat of the summer.

My airplane is hangared and while the cabin is not scalding when I get in it, it doesn’t take long once I move it out of the hangar before some surfaces in the cabin are too hot to touch.

My wife and I fly a 1972 Cessna 310Q around the western half of the U.S. most of the time. We don’t load it heavily; usually it’s just the two of us, “prop-setting” around to visit our grandkids that live in California, Wyoming and Texas.

We are both experienced pilots and are very comfortable with the little hassles of using an oxygen system in our unpressurized twin. So we cruise in the mid-teen altitudes where the air is cold.

We are looking for an easy-to-use solution to cool off the cabin of the airplane prior to launch, during taxi and during climb. Give me some solutions.

I can sympathize with you. I well remember wishing I had a way to beat the heat during a cross-country flight in September to attend a Club Pilotos de Mexico get-together at the Hacienda de los Santos resort in Alamos, Mexico. (A very memorable trip to a wonderful resort.)

But back to your request for a solution to mitigating a hot cabin. There are permanently installed vapor cycle systems and portable icebox systems.

There are two different types of vapor cycle systems. Electrically-driven systems use power from the aircraft electrical system (i.e., alternator and battery) or from ground power to drive the compressor and airflow fans.

One advantage of this type of system is that they can be powered up using ground power to cool the cabin prior to engine start. The second advantage is there are no restrictions on system usage. Systems that drive the compressor off the engine need to be shut down during takeoff and landing since a small portion of engine power is used to drive the compressor.

The second type of system uses engine power to drive the compressor through a belt tensioning system. This system draws only a small electrical load—enough to power the distribution fans and control circuitry—but as was mentioned earlier, this system must be turned off during takeoff and landing operations.

Aircenter Inc of Chattanooga, Tenn. sells a Cool Air system for your 310. This electrically-driven system is installed aft of the rear cabin bulkhead. According to Gary Gadberry at Aircenter, the Cool Air system adds 55 pounds to the aircraft empty weight.

The system draws 70 amps during maximum cooling and somewhat less during other operating modes. This means that 100 amp alternators will need to be installed on both engines if they aren’t already installed.

In addition to a bit of airframe modification to accommodate fresh air and evaporator ducting, some additional wiring will need to be installed. Gadberry estimates that the installation takes 100 man-hours to complete.

Aircenter offers a flat rate installation of $6,000 at its Chattanooga service center. The cost of the STC approved kit for the 310 is $18,000. Total cost when completed at the Aircenter facility is $24,000.

According to Jeff Barlett at Kelly Thermal systems, the ThermaCool systems weigh approximately 48 pounds and draw approximately 40 amps at 28 volts during operation.

KATS ThermaCool also holds approval to install a second 28 volt, 95 amp alternator as an option. This is a standby installation; either alternator can be selected to supply power, but not both at the same time.

As you can see, while air-conditioning is offered by three companies, the number of aftermarket options for your 310 is limited to the system from Aircenter Inc. Neither Air Comm nor KATS offers a system for your 310.

Installing that FAA approved air-conditioning system from Aircenter will cost you the price of the system, 55 pounds of useful load and the use of your airplane for approximately one month during the installation of the system—but you’ll gain a much more comfortable cabin environment prior to start, during ground operations and during your climb to altitude.

If you’re not ready to take that step, there is a much more basic but effective low cost solution available.

The IcyBreeze portable air conditioner can be filled with two quarts of water, and the rest with ice. Cold water is drawn up into the heat exchanger while fresh air is pulled into the top and across the heat exchanger, cooling the air by up to 35 degrees.

The cooled air arrives through a vent, or it can be directed using a stay-put flexible hose. All units have a three-speed fan and either a rechargeable battery and/or 12 volt or 110 volt power supply (or all three). Amp draw for units running on ship power are specified at 1.5 low, 2.5 medium, 2.9 high.

The empty weight of the IcyBreeze Chill is 21 pounds; fully loaded with ice, it will add 51 pounds to your airplane. Cost for a Chill 12V unit (no rechargeable battery) is $249. The top-of-the-line Whiteout lists for $425 and comes with several accessories including a custom NiMH battery pack and smart charger, 12 volt power supply, 110 volt power supply, wired remote and a four-foot extension tube. Several other packages are available. 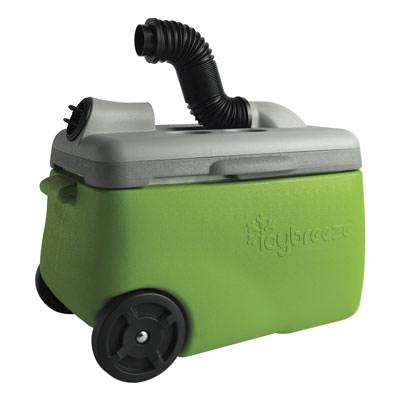 Arctic Air of Cordele, Ga. sells ice coolers that can be used in airplanes with either 12 or 24 volt (when used with a $140 24-to-12 volt converter, available from Arctic Air) electrical systems.

Arctic Air units come in three sizes: 30 quart, 38 quart and 52 quart; with one or two output fans; using 12 volt or 24 volt power; and with one or two louvered or ducted outlets. 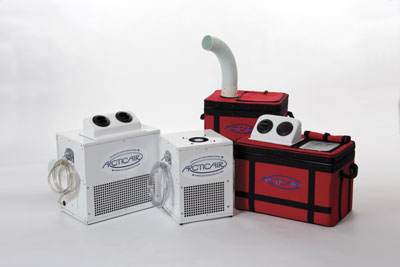 Users report that these units work well even in airplanes with a large cabin such as your 310. Prior to use the unit is filled with either block, crushed or cubed ice, put in the cabin either on the rear seat or in the baggage area, tied down and powered up.

Depending on the temperature and the type of ice, cold air is available from 1.5 to three hours.

Arctic Air units are attractive and well insulated, feature two speed settings and are relatively inexpensive. Prices range from $495 for a 12 volt, 30 quart, single-fan unit with a flexible duct, up to $650 for a 52 quart, 24 volt, dual-fan unit with dual louvers.

One option on the Artic Air website is a $90 battery pack. The battery pack is used to cool the cabin—such as during preflight—without using aircraft power.

Artic Air also sells portable vapor cycle 12 and 24 volt air-conditioning units that can be used in aircraft. Prices start at $4,600, and more information is available at the Arctic Air website.

Steve Ells has been an A&P/IA for 43 years and is a commercial pilot with instrument and multi-engine ratings. Ells also loves utility and bush-style airplanes and operations. He’s a former tech rep and editor for Cessna Pilots Association and served as associate editor for AOPA Pilot until 2008. Ells is the owner of Ells Aviation (EllsAviation.com) and lives in Templeton, Calif. with his wife Audrey. Send questions and comments to .