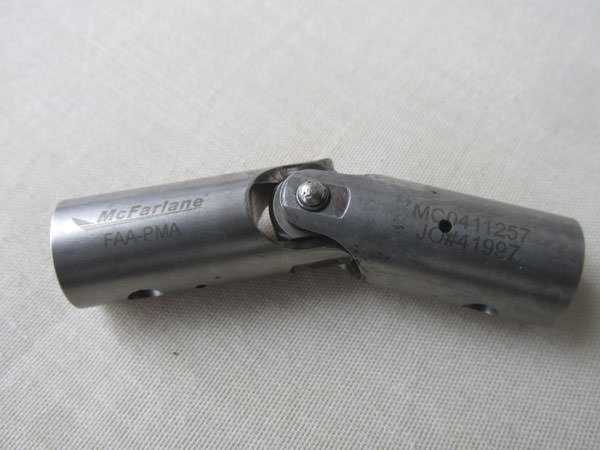 Certain McFarlane universal joints for single-engine Cessna aircraft may fail and should be immediately inspected and/or replaced. The good news is that McFarlane has offered to help defray replacement costs for owners with affected parts.

On Dec. 11, 2017, McFarlane issued Service Bulletin SB-9, Revision A. This service bulletin addresses concerns with a replacement universal joint (Part No. MC0411257) that fits several models of single-engine Cessna airplanes, from the Cessna 120 all the way through the Cessna 210. 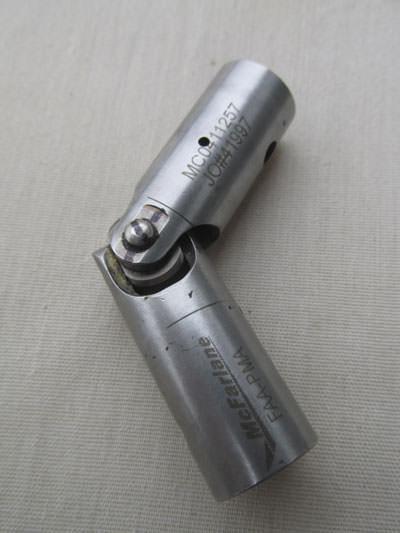 Purpose of a universal joint

The universal joint that is the subject of the service bulletin is a bendable connection between the control wheel shaft and the Y-shaped control yoke assembly under the instrument panel. There are two universal joints installed in each aircraft, one on the pilot side and one on the co-pilot side.

A failure and subsequent separation of either universal joint would render the control wheel on the side with the failed joint inoperative. Either the pilot or co-pilot—depending on which side failed—would no longer have control of the ailerons or elevator.

The McFarlane universal joint is designed with two yokes that provide the attach points for connecting the control wheel shaft and control yoke shaft; a center pin and two half-pins that the yokes pivot around; and a center block used as a base for mounting the pins.

A rivet is used to secure the pins and yokes to the block. If the rivet were to break apart and slide out, the entire mechanism could come apart.

It’s important to remember that service bulletins are not Airworthiness Directives. Even if a manufacturer refers to a service bulletin as mandatory, a private aircraft owner is under no FAA mandate to comply with it. As a result, some owners and mechanics may disregard service bulletins as being not all that serious. This service bulletin should be taken seriously, however, because the consequences of a failure of the universal joint are dire.

Compliance with the service bulletin is straightforward. The initial inspection should be done immediately.

The first step is to inspect the part and identify the “JO” (lot) number stamped on the universal joint itself to see if one of the affected joints is installed. The lot number and part number may or may not be visible by simply inspecting the joint without removing it.

Some universal joints have protective sleeves made of rubber hose sections that are slid over the joint. Universals with sleeves installed may require removal so the sleeve can be slid back far enough to inspect the part and lot numbers. There are only two bolts and nuts that connect the universal to the system, so removal doesn’t usually take too long.

If the joint part and lot number falls within the range listed, the universal joint should be removed and inspected.

The service bulletin states that if a joint passes the initial inspection, it must be re-inspected at 25-hour intervals. The joint may be kept in service for the next 100 flight hours or for one year after the first inspection, whichever comes first. After either of these limits is reached, the joint must be replaced.

Affected parts should be replaced as soon as possible, even if they pass inspection. Completion of the service bulletin by replacing the parts will provide peace of mind and negate the need for further inspections. 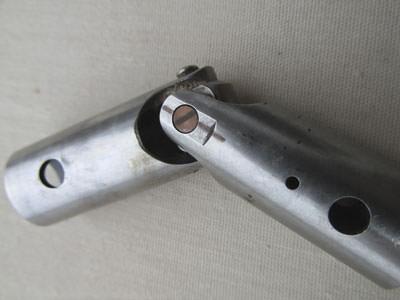 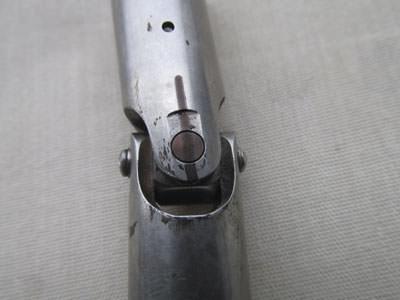 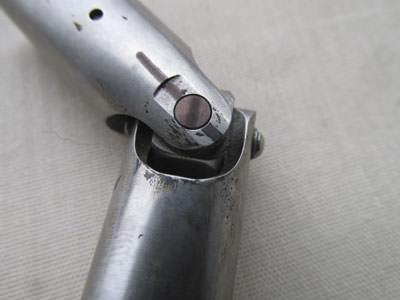 Once removed, the inspection process for each universal is fairly simple. Each universal yoke should rotate freely in its range of motion.

The yokes are designed to pivot around the center pin and half-pins. The pins should remain in a stationary position in the block and they should not move as the yokes are pivoted around them. If the yokes are bound or not freely pivoting, the universal joint must be replaced.

Service Bulletin SB-9 includes illustrations for marking the pins and yokes with a straight line using a permanent marker with the yokes held straight. Once the mark is made, bend each yoke; the line should appear broken as the yoke is pivoted around the pin.

If the line remains unbroken as the yokes are bent, the pin is moving along with the yoke and the universal joint cannot remain in service.

The center pin is easier to inspect than the two half pins that are installed under the rivet head and tail. Note that the illustration in Revision A of the service bulletin under the paragraph for the half pin inspection (See top image on Page 31) is actually an illustration of the center pin inspection. The concept is the same, however: the yokes should rotate around the pins while the pins themselves remain stationary. The rivet should be tight with no end-play or looseness. 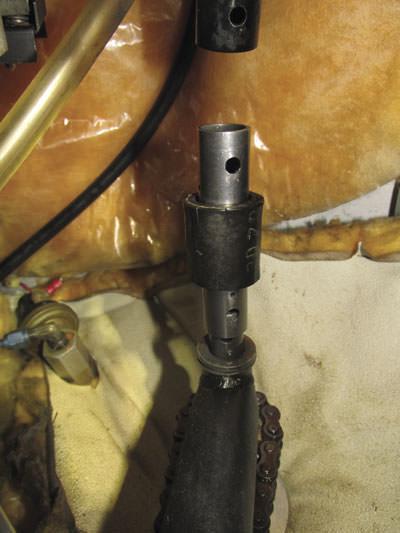 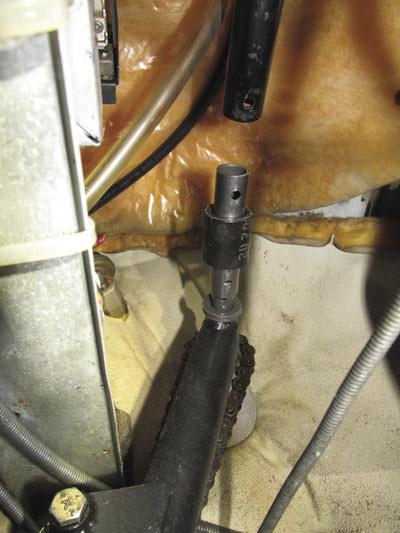 Assuming that the joint passes inspection and it hasn’t exceeded the time limits specified in the service bulletin, it can be reinstalled. Any joint which fails the inspection should be replaced with a new MC0411257 joint.

As noted above, one could argue that any joint from the affected lots (even one which passes inspection) should be replaced as soon as possible, as McFarlane is currently offering to assist in defraying the cost of replacement (see “Replacement parts” Page 35).

Before installing new McFarlane universal joints that didn’t come directly from McFarlane Aviation (for example, parts from a maintenance shop’s spare stock), double-check to ensure they are not accidentally from one of the bad lots.

Some Cessna parts manuals specify that a protective sleeve be installed over the pivoting mechanism of the universal joint. The sleeve is made of a short section of reinforced hose and is listed under its own part number in the parts manual. This sleeve provides a small measure of support for the joint, in addition to protecting it from grit or debris that could cause it to bind.

McFarlane specifies in SB-9, Revision A that it now requires the protective sleeve on all MC0411257 universal joint installations, whether or not the aircraft parts manual specifically lists it.

After installation, the control wheel should be moved from stop to stop in all directions to be sure that it moves freely with no binding. Replacement parts

Speaking as both a mechanic and a pilot, it’s commendable that McFarlane is currently offering both a parts and labor credit toward the replacement of affected universal joints. (As of early April, McFarlane has the parts in stock, ready to ship. —Ed.)

The service bulletin states “McFarlane Aviation, Inc. will issue a credit of $50.00 labor for the replacement of a universal joint from the affected lots (see Section IV). Part Credit and a surface freight allowance will be given upon return of the affected part(s).”

This makes this a low-cost service bulletin for owners to comply with. 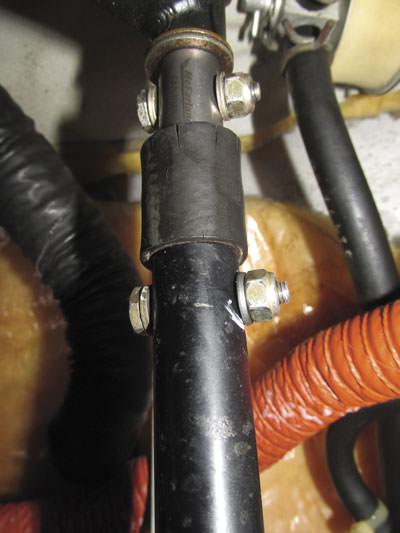 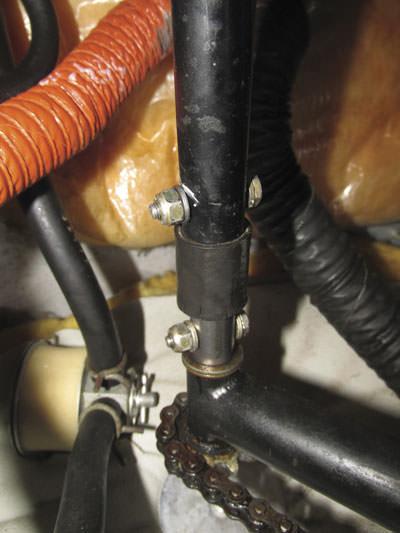