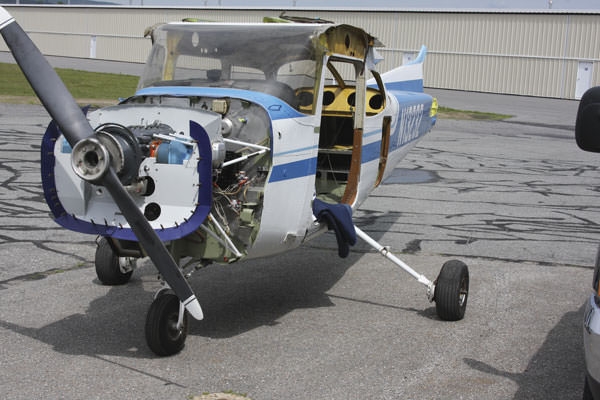 Loss of control is a hot topic among the NTSB, FAA and other aviation organizations that promote aviation safety.

Last year, the NTSB named the prevention of loss of control in flight in General Aviation as one of its “Most Wanted” transportation safety improvements. The NTSB report issued in 2015 stated that “between 2001 and 2011, over 40 percent of fixed wing GA fatal accidents occurred because pilots lost control of their airplanes.”

This is unacceptable and mostly preventable. All pilots should be aware of the possibility of loss of control and take the time to review actions to prevent it.

One way is to study flight manual procedures specific to the aircraft you fly. Another is to be aware of common situations that can contribute to loss of control. As a former air carrier pilot, air taxi pilot and mechanic with inspection authorization, I will focus this article on equipment and mechanical malfunctions that can also contribute to loss of control. 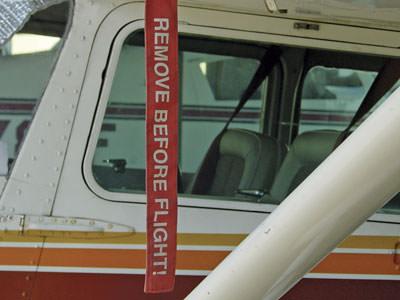 As aircraft control systems, flight management systems and electronics have advanced to make the task of flying easier, it is still necessary to have sufficient skills not only to fly the aircraft but to do all of the tasks we learned to do as a student pilot.

Preflight actions, and proper flight planning—such as checking the weather, notams, aircraft preflight, weight and balance checks and the use of checklists—are all part of the job of flying. Without regard to who actually does all these tasks, as pilot in command, you are responsible for your actions in the operation of your aircraft. Even if it’s just a local flight and you are in hurry, don’t shortcut the process.

How does this relate to loss of control? Preparing to fly a plane is a process of building blocks, and each item on the preflight list is important to the safe operation of an aircraft. The winter season can bring about additional challenges as cold weather, snow and ice can contribute to accidents because of a rushed or skipped preflight.

Consider the flight crew that attempted to take off with control locks in place and crashed. Did someone actually do a preflight check and didn’t notice the gust locks were in place? And then, in addition, missed an important item on the pre-takeoff checklist—flight control check?

Several years ago an aircraft was destroyed when a screwdriver was used in place of the control lock mechanism normally found with Cessna aircraft. While the control lock mechanism is not a required piece of equipment for flight, it is definitely not safe to use a screwdriver as a substitute. You can certainly duplicate the original Cessna-supplied control lock, or make one of your own—just be sure that it is marked is such a way that it is not overlooked during preflight.

I have written in the past about checking an aircraft after maintenance, and again it is the pilot in command that has the last word as to whether an aircraft is acceptable for flight or not. Occasionally, errors are made and flight controls are improperly rigged, with the worst scenario being a control rigged in reverse.

This actually happened a few years ago, when an aircraft elevator trim control was rigged in reverse. The aircraft was taken up for a test flight with the pilot not realizing this significant error. The autopilot was engaged, altitude hold selected; and the elevator trim and elevator control opposed each other until the autopilot disconnected in an extreme out-of-trim condition with suspected full elevator input to oppose the mis-rigged trim. The aircraft was not flying high enough to allow sufficient time for the pilot to correct the problem and the aircraft crashed.

While this would be a difficult error to detect on a preflight without the help of a second person, it is something you must be aware of any time an aircraft flight control has had recent maintenance performed. Do you as a pilot not only move the flight controls on preflight, but actually confirm that the controls work in the proper direction? Which way should the aileron move when the control wheel or stick is moved? Are you sure?

We will never know the exact details, but it’s entirely possible that these items in the building-block approach to flight were completely bypassed.

How about the elevator and rudder, and the way that they move in relation to the control movement in the cockpit? Are the controls smooth, or are there unusual noises or resistance to full control movement during a preflight ground check of the flight controls?

Winter weather can add environmental concerns such as snow or ice, which can build up on flight controls when the aircraft is parked and restrict full control movement or even jam a control in a partially deflected position.

When preflighting your aircraft in
winter, check flap travel incrementally;
if the flaps are obstructed by snow or ice, or one flap is blocked from movement by ice, the flap actuator mechanism can be damaged and lead to an asymmetrical flap condition preventing full control of the aircraft on takeoff. 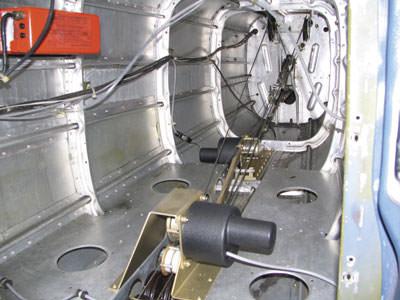 Lack of proper flight control maintenance can lead to unauthorized patches or repairs; broken, cracked or missing parts (such as elevator and rudder tips); and slack control cables.

An extreme example of just plain bad housekeeping that cost two people their lives is attributed to a WD-40 can found lodged in an aircraft tailcone after an accident. There have been other bad housekeeping situations, too, such as plastic water bottles and even a flashlight discovered on the cockpit floor ahead of the rudder pedals.

Never be casual about a preflight, especially after maintenance.

In the case of unauthorized repairs, at least one popular aircraft manufacturer, as stated in their maintenance manual, does not allow stop-drilling of cracks in any primary flight control and does not allow scab patches, either. The control surface must be re-skinned, primed, painted and then balanced to be considered an authorized and airworthy repair.

Flight controls must be inspected, repaired and returned to service by following all up-to-date manufacturer’s instructions exactly with no shortcuts.

It is without question that any damage to a flight control requires maintenance, or, at the very least, an inspection by a licensed mechanic to determine if repairs are in order or the control is okay for return to service.

While working for an aircraft manufacturer’s service center, I recall a situation where a pilot flew in with a complaint that his right aileron was binding and making a scraping sound when he operated the controls.

The mechanics took a look at the aileron and discovered damage to the underside of the wing and aileron which was caused by the pilot. He admitted that he had struck a tree on a night approach to landing several weeks earlier. This pilot had been flying the airplane multiple times in this condition and had no idea what the extent of the damage was. 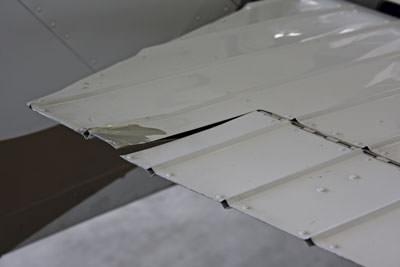 Cable tension is another maintenance issue that must be considered as important to proper flight control operation. When the weather turns cool, control cable tension is reduced because the aircraft and the cables shrink slightly. Slack in the cables will create lost motion and reduction in control surface deflection. This could result in your inability to obtain a perfect landing. 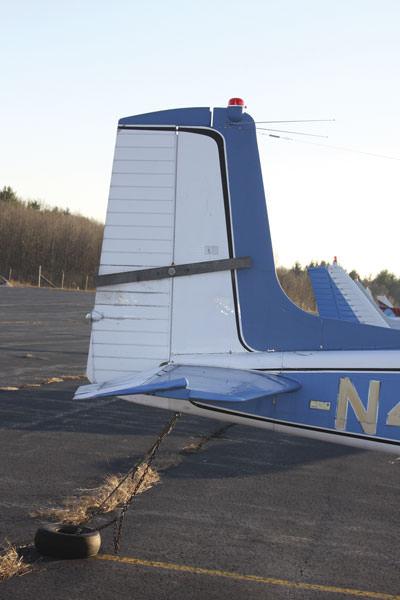 As aircraft become more technologically advanced, autopilots, flight management systems and avionics all enter into the discussion of loss of control. In order to rely on an autopilot, it must have regular maintenance checks and service—and, as part of that service, control cable tension and proper control travel (rigging) must be within limits for the autopilot to perform properly.

Autopilots and associated avionics certainly enhance safety by reducing the pilot’s workload, but at times, pilots—especially during single pilot IFR operations—can become task-saturated. Mix in bad weather, a long duty day, extensive holding, being low on fuel… and things can go bad quickly. You must know your equipment and be very familiar with all modes of operation.

In my travels as an air carrier pilot I have overheard other pilots’ statements regarding autopilots including, “Why is it doing this?” and “Look what it’s doing now.” While this may be amusing to some, the pilot in command, not the autopilot, must be in control at all times. Take the time to study, ask questions and really dig into the manuals to find out why it’s doing what it’s doing.

Many new aircraft are now being delivered with autopilots and flight management systems as standard equipment, and accident reports seem to suggest that some pilots fly into conditions that they are not capable of handling on their own.

Autopilots have limits, and when weather conditions get bad and those limits are exceeded (such as moderate to extreme turbulence, or icing conditions), expect that the autopilot will disconnect and leave the flying to you.

Never use an autopilot to fly into conditions that you are not capable or experienced enough to handle when hand-flying the aircraft. Realize your limits, and give yourself an out if conditions get bad so you may live to fly another day. Comply with manufacturer’s maintenance and service recommendations for autopilots to ensure that your autopilot functions correctly when you need it the most.

Prevention is an ongoing process

Recurrent training, studying the manuals on autopilots, and knowing how to operate your avionics and flight management systems can help reduce stress, especially in high-workload IFR environments.

Improvements “Prevent Loss of Control in Flight in General Aviation”

2016 Most Wanted list
ntsb.gov/mostwanted
Published in Maintenance & Technical
Tagged under