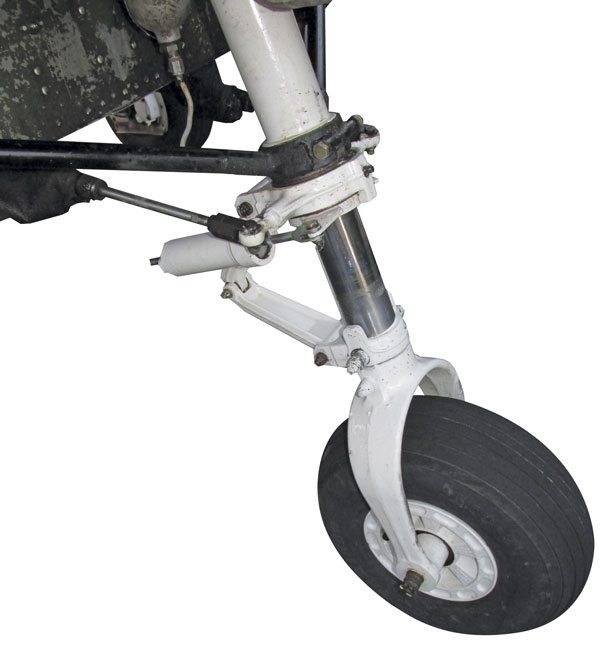 In the third article in a DIY series for pilots, A&P Jacqueline Shipe goes through the steps an owner can take in order to properly service the struts on their aircraft.

Among the preventive maintenance items listed in FAR 43 Appendix A that pilots may legally perform on an airplane that they own is strut servicing.

The struts on any airplane serve a critical purpose. They provide the shock absorption necessary to prevent the airframe structure from enduring too much stress from the impact loads incurred on landings.

Even taxi operations impose stress on an airframe every time the gear hits a bump or uneven surface.

The strut absorbs the bulk of these loads and prevents them from being transmitted to the airframe.

There are several different kinds of struts used for shock absorption. Over the years aircraft manufacturers have used different materials to limit the stress from the impact of landing. Some have used rubber biscuits, bungee cords and spring steel.

The most common type found on most planes (and the only type used on fairly heavy planes from light twins all the way up to airliners) is the hydraulic air/oil cylinder, also referred to in some manuals as oleo struts. The oleo strut is very reliable, can withstand tremendous loads and is fairly simple in its design.

The oleo strut uses air pressure and hydraulic fluid to create a spring effect. The strut consists of an outer housing called a cylinder and an inner piston that is connected to the nose fork or to the main wheel axle. The piston portion of the strut is the part that actuates up and down.

There are different styles and configurations, but all struts house hydraulic fluid in the lower section of the strut and compressed air (or nitrogen) in the upper section. As the piston is driven into the cylinder upon landing, the fluid is forced through an opening called an orifice that slows the rate of the flow.

Some manufacturers make use of a metering pin connected to the piston. The pin is mounted so that it is forced upward through the orifice along with the fluid. It protrudes up through the orifice, is slim in the middle and wider on both ends.

Its shape is tapered so that as the piston reaches the top portion of its travel, less and less fluid can fit throughthe opening. This gradually slows the fluid flow and decelerates the piston. Meanwhile the pressure of the compressed air is being steadily increased as the piston travels upward and reduces the volume of space in the upper chamber.

Eventually the increased pressure of the compressed air overcomes the decreasing fluid pressure and forces the piston to extend. As the fluid flows in the other direction, its flow is impeded at a steady rate by the opposite end of the metering pin, gradually slowing the fluid flow in the opposite direction. This results in dampening out any oscillations and returning the airplane to its normal static height above the ground.

Some models don’t use metering pins but have metering tubes with various sized holes in them that slow the rate of flow as the piston reaches either end of its travel. Some manufacturers don’t use either metering pins or tubes, but instead use restrictor plates with orifices in them to produce the same effect.

Fluid and air: both are vital

On any model, the strut has to have the correct amount of fluid and air to work properly. The fluid used for strut servicing is MIL-H-5606 (red) mineral-based hydraulic fluid.

5606 is sold by the gallon and in quarts. It is nice to keep a supply on hand not only for struts, but also to refill brake and gear reservoirs. Typically it takes around a gallon of hydraulic fluid to service three struts.

Nitrogen is better than compressed air for strut servicing because it is drier and doesn’t vary in pressure as much as air; it is also less corrosive to the inside of the strut housing.

However, nitrogen is not always readily available. A person needs a regulator and high-pressure hose in addition to a nitrogen bottle, and the cost for all the items can exceed $500.

If nitrogen is not available, air pressure from a standard air compressor is usually sufficient to air up a nose strut. Nose struts don’t require as much pressure as main struts.

All the single engine Cessna series only have an inflatable strut on the nose; the mains are solid or tubular steel.

If the pressure required is beyond the capability of a standard air compressor, a booster can increase compressor air to a high enough level to inflate the struts. These are available for around $200.

Though Piper aircraft can require 200 psi, single engine Cessna nose struts don’t require that much pressure. As long as the tail can be lowered a little, a regular air compressor that produces at least 130 psi works fine for Cessna singles.

Twin Cessna main and nose struts, however, do require a lot of pressure. It would be best on a twin Cessna (or any twin, period) to always use nitrogen, due to the increased weight of a twin engine plane and the more extreme temperature changes.

The tools a person needs to service a strut include about three feet of clear flexible tubing with a ¼ inch (inside diameter) opening to fit over the Schrader valve; a valve stem tool; and an empty gallon size container to catch the old fluid.

The airplane needs to be jacked, or at least have the nose raised if only the nose is being serviced.

With the airplane jacked, remove the valve stem slowly from the filler valve in the top of the strut. It is best to loosen it enough to release the air pressure, and then remove it the rest of the way after the pressure has bled off. A small spray of hydraulic fluid comes out with the air pressure, so it’s a good idea to have a rag handy.

Once the valve stem has been removed, push the tubing over the open Schrader valve and insert the other end into the empty container. Next, push the strut up to its fully collapsed position. Any old fluid will be shoved out.

Then remove the container with the old fluid and insert the hose into a can with at least a half-gallon of clean new hydraulic fluid. Next, pull the strut down to its maximum extended position. The suction will pull in the fluid; it will continue to siphon for a few seconds after the strut is fully extended.

Next, slowly push the strut up to its fully collapsed position. As some of the fluid is pushed back out, air bubbles will come out too.

Extend the strut again, and repeat the process until all of the fluid comes out as a solid stream on the compression stroke.

Once all of the air bubbles are removed, the strut will be considerably more difficult to push up to its collapsed position. Once the strut is fully collapsed, the hose should then be removed from the valve and the valve core reinstalled.

This process is called bleeding the strut, and it’s the only way to get the proper amount of hydraulic fluid into the inner chambers of the cylinder.

There is no way to simply pump a little fluid in to the strut; the strut must be filled using this bleeding process. If the process isn’t followed, large air pockets in the lower chamber can cause the strut to collapse under a load.

Once the strut is filled with fluid, it can then be aired up with either nitrogen or compressed air through a strut booster.

After the airplane is lowered off the jacks, the final adjustments can be made by releasing a little of the pressure by depressing the valve core for a split second at a time.

Generally main struts should be inflated so that around five inches of the piston is exposed, and nose struts to around four inches.

The exact range for each model can be found in the service manual. The struts should be inflated so that they are within the proper range even when the airplane is fully loaded.

Properly serviced struts should have a certain amount of buoyancy about them.

Struts that are filled with air pressure but are low on hydraulic fluid tend to stick in place. Struts that stay extended for a period of time after a plane has landed and then suddenly collapse are also typically low on fluid.

Any sort of a knocking noise from the nose strut during taxi operations or upon landing is an indication that it is bottoming out due to it being low on fluid, air, or both.

If a strut is low on fluid, it is usually because the rubber seals have gotten old and hardened. There is generally a rubber wiper ring and a large rubber O-ring with one or more backup rings in the strut housing. These rings harden and become brittle over time, especially in cold weather.

Granville’s Aircraft Hydraulic and Strut Sealant is an FAA approved product that can be mixed with hydraulic fluid and added to the struts during the servicing process. It doesn’t cause the seals to swell, but it does cause them to soften and become more flexible, much as they were in their original state.

This additive works well, once enough of it gets into contact with the seals. After it is first added, the strut may still go flat a time or two and need to be re-aired before it finally holds.

Properly serviced struts help to soften landings and prevent damage to the airframe, and keeping the struts in good shape will pay off big in the long run.