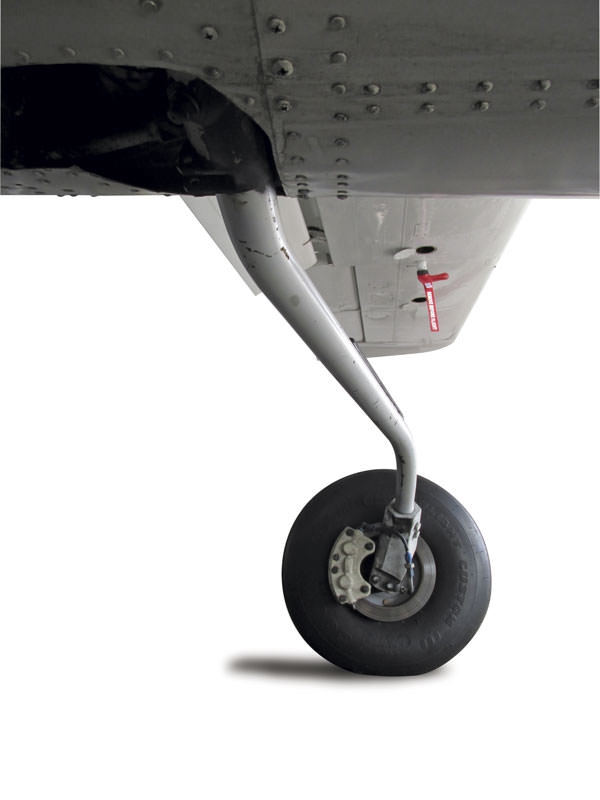 In the late 1940s and through the decade of the 1950s, General Aviation began to really take off as airplane sales increased. The postwar economy was favorable for the production and sale of both single- and twin-engine models, and the “big three” in the aviation industry were Beechcraft, Piper and Cessna.

It was 1947 when the Beechcraft Bonanza appeared on the aviation market. The Bonanza was the first retractable single-engine plane on the market that had a wide appeal to a large number of customers. Sales were good, and in the late 1950s, Piper also entered the single-engine retractable gear market with the debut of the Piper Comanche.

Cessna wasn’t going to be left out, and in 1959, the Cessna 210 made its debut. Early 210s were essentially Cessna 182 frames with a stronger engine and a retractable gear system that was very complicated in its design.

The main landing gear doors had their own actuators in addition to the gear actuators, along with an accumulator for the main gear doors. The hydraulic pump on the earliest models was engine-driven. The whole system had a vast array of hydraulic tubing and was plagued with glitches.

As years went by, Cessna kept making improvements and major changes to the hydraulic system until it had a relatively trouble-free gear design by the end of the 1970s.

Cessna’s 1979 and later models had no main gear doors (eliminating all the main gear door actuators, accumulators and associated tubing) and the engine-driven pump had been long since replaced with an electric pump. The Cessna 172, 177 and 182 RG models all have the improved design for which the 210 was the predecessor. 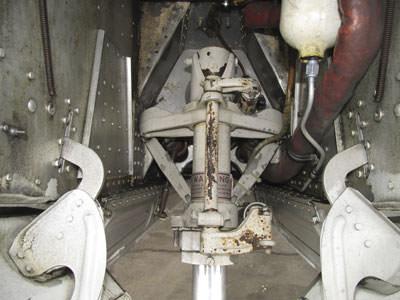 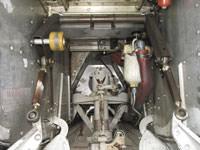 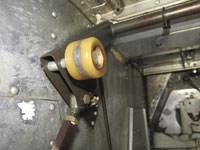 The general system (with a few differences in specifics on differing models) operates hydraulically and uses hydraulic pressure and an electrically-driven pump to provide the means of extending and retracting the gear.

The major components in the system consist of a power pack assembly, two main gear actuators, the nosegear actuator, main gear down-lock actuators, a hydraulic gear selector lever, an emergency hand pump and all the associated plumbing and electrical circuits for the system.
Power pack

The pressure switch shuts off the pump when system pressure reaches 1,500 psi and kicks on the pump when pressure drops below 1,000 psi. There is also a dipstick, so the fluid level in the reservoir can be regularly checked. The power pack is located behind the central console. 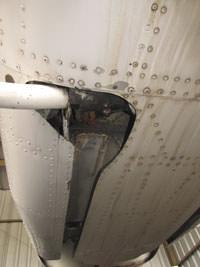 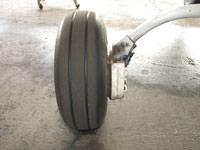 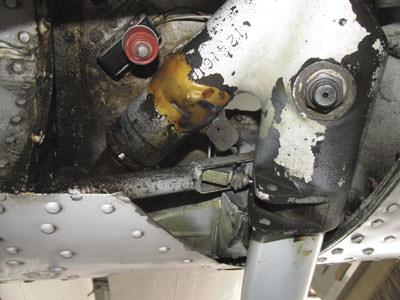 The main gear actuators are installed in the floor just aft of the doorframes. They are mounted at roughly a 45-degree angle to the longitudinal axis of the airframe. These actuators have large teeth on the end of a very strong steel shaft, which extends and retracts according to the flow of hydraulic pressure.

The main gear legs are bolted into a Y-shaped steel housing called a pivot assembly. The pivot assembly is mounted on a bearing, allowing it to rotate.

The angles at which the pivot assembly, actuators and gear legs are connected and mounted in the frame, in addition to the shape of the main gear leg and pivot assembly, cause the gear leg to swing downward, inboard, and then aft as it retracts.

The plane has to be jacked high enough to raise the main wheels about 18 inches off the ground to have enough clearance to swing the gear when performing gear maintenance or checks. 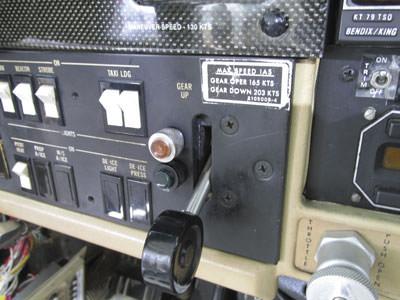 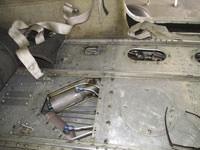 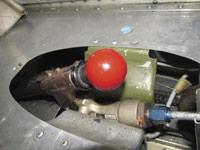 The nosegear actuator is attached to a rod end that is connected to the nosegear trunnion. It has a steel shaft with a piston made onto the shaft. The shaft/piston combo moves back and forth depending on which side of the piston has hydraulic pressure on it.

Fluid from the gear-up line extends the shaft and pushes it forward, which in turn pushes the nosegear forward causing it to pivot upward into the up position. Pressure from the gear-down line presses on the opposite side of the piston causing the shaft to retract into the actuator, pulling the nosegear into the down position. 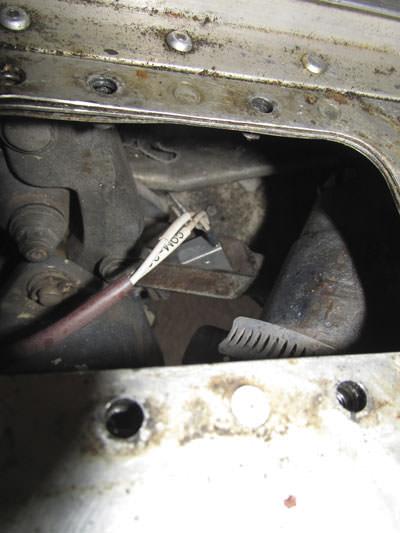 The landing gear selector lever on all but the earliest 210 models is fully hydraulic. The pilot is opening and closing off ports when the lever is moved, allowing fluid to flow in the opposite direction. 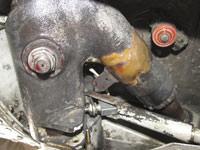 The system also has a series of switches that make contact or not depending on gear position, and/or the down-lock hook position. A green light is illuminated when all three gears are down and locked.

An amber “gear unsafe” light is illuminated on some models anytime the gear is in the up and locked position, staying on continually in flight. On later models, the amber light was replaced with a red light that is illuminated anytime the pump is operating.

The gear warning system consists of throttle micro-switches and a switch on the flaps. Lowering more than 25 degrees of flaps or retarding the throttle below approximately 12 inches of manifold pressure sets off a horn if the gear is not in the down and locked position. 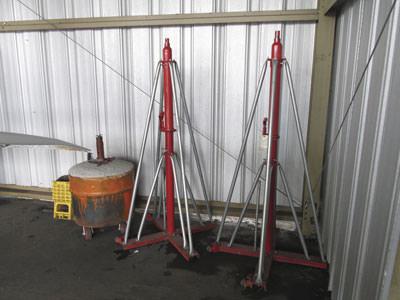 A general flow of what happens as the gear is retracted is as follows: after takeoff, the squat switch located on the nose strut closes as the nose is lifted off and the strut moves to the fully extended position.

As the pilot selects gear up after takeoff, pressurized fluid from the power pack is routed through the gear selector valve to the nosegear actuator and main gear down-lock actuators, causing them to release the down-lock hooks.

Pressure is then routed to the main gear actuators, and they begin the process of rotating the pivot assemblies and swinging the gear legs aft and up.

Once all three gears are fully retracted, system pressure builds to 1,500 psi and the pressure switch on the power pack shuts off the pump. 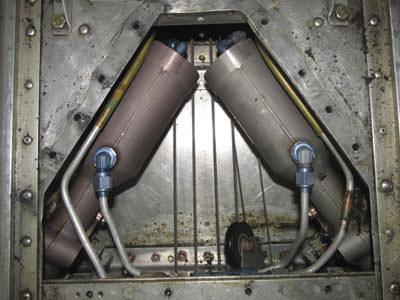 The gear lowering cycle begins with the selector valve allowing pressurized fluid to flow to all three gear actuators and to the main gear down-lock actuators.

On some of the later models, the down-lock actuators are internally spring-loaded to the latched position and are configured so that the fluid is returned through them from the main actuators on the gear lowering cycle. With no fluid pressure to overcome the spring pressure, the locks pop into place as the main landing gear pivot assembly is rotated to the down position.

Once all three gears are down and locked, the system pressure builds and the pressure switch on the power pack opens, shutting off the pump. Electrically, the down and locked switches on each gear leg close and send power to illuminate the green light. 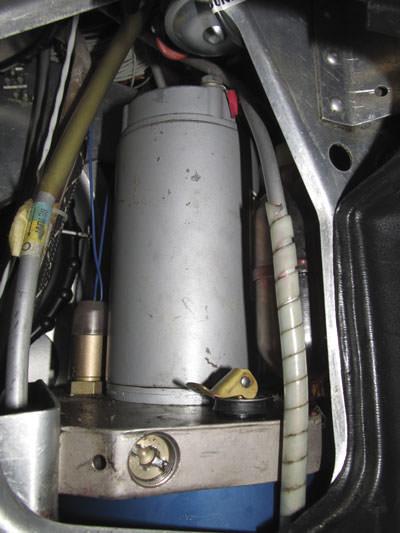 Maintenance of the system includes routine inspections for leaks or chafing of hydraulic lines, regularly greasing moving parts and checking for proper rigging.

One of the most common malfunctions involves the brake line that is installed in the hollow main gear leg through a swivel fitting in the pivot assembly. These leak occasionally or the brake line itself rubs on the gear leg and develops a leak.

The switches that indicate gear position wear with use, and will stop making contact when they should. These switches have to be adjusted or replaced periodically. The gear-up bumper blocks also get worn down over time, and if they are not replaced, they can allow the gear to cause damage to the up-lock switches.

The actuators all have O-rings and seals that wear out and develop leaks, and these have to be rebuilt occasionally. 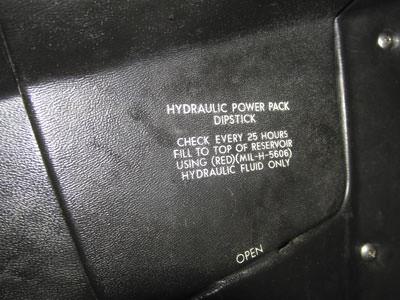 When troubleshooting a problem, a thorough understanding of how a particular system works is important. The following are general suggestions, but the exact schematic for each plane should be consulted before making a diagnosis.*

If the gear won’t retract and the pump doesn’t run, and there is a proper amount of hydraulic fluid in the system, a faulty squat switch (open when it should be closed); pressure switch (failed in the open position); or power pack solenoid could be to blame. These are the three main electrical items that must function correctly for the pump motor to receive power.

If these items are functioning correctly, the pump motor could be defective. The first thing that should be checked is battery voltage to ensure the battery is putting out enough power. The pump motor draws a heavy current load on the electrical system and requires a lot of juice.

If the gear will retract but the pump runs all the time, assuming there are no leaks in the system, the pressure switch or solenoid on the power pack could be sticking in the closed position.

If the power pack pump kicks on often during flight, the pilot might want to consider lowering the gear and keeping it extended for the duration of the flight, as this could be a sign the system is losing hydraulic fluid and/or pressure somewhere. If too much fluid is lost, or if the system malfunctions and is bypassing fluid internally not allowing pressure to build up, the hand pump will not lower the gear. 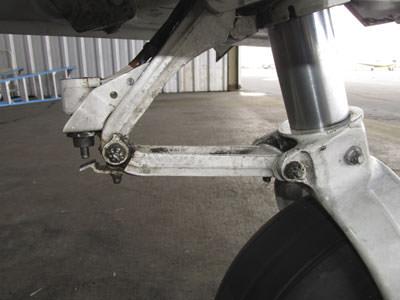 A note about tires

Tire replacement on the retractable models is the same as on other models, but re-capped tires shouldn’t be used because they usually have a larger outside diameter than other tires; this could cause them to jam on the sides of the wheel well.

Also, if the tire is wearing excessively on one side, the toe-in and toe-out adjustments are fairly easy to make on these models by adding shims where the axle is attached to the gear leg.

When sitting level on the ground, the tire should not lean inboard or outboard, but should be perpendicular to the ground. 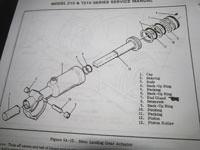 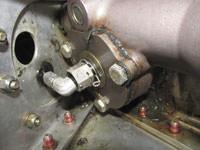 A thorough understanding of the gear system on the plane a person flies makes it easier to handle a malfunction and helps with troubleshooting a problem.

One of the best resources a pilot can use for learning about any system is the maintenance manual for his or her specific make and model. It gives a system description as well as a troubleshooting table for common faults.

There are free Cessna manual downloads available through Red Sky Ventures (RSV), and paper copies of manuals can be purchased from aviation suppliers including Aircraft Spruce & Specialty.

The POH is also a good resource to review for a general system description. Learning as much as possible about your plane makes you a safer pilot.

*There are differences based on each airplane model and serial number, so the schematic and manual for a particular plane should be consulted for exact details. Jacqueline Shipe grew up in an aviation home; her dad was a flight instructor. She soloed at age 16 and went on to get her CFII and ATP certificate. Shipe also attended Kentucky Tech and obtained an airframe and powerplant license. She has worked as a mechanic for the airlines and on a variety of General Aviation planes. She’s also logged over 5,000 hours of flight instruction time. Send question or comments to .