Many single-engine aircraft rely on alternators to power aircraft systems, avionics and cockpit gadgets. A&P Jacqueline Shipe guides you through how alternators work and what to do when yours isn’t functioning correctly.

Nowadays, with everything from glass cockpits to auxiliary power outlets for iPads and phone chargers, there are more demands on the average aircraft’s electrical system than ever before. Most General Aviation airplanes rely on an alternator to provide a steady, reliable source of electrical energy to power electrical components and recharge the battery.

The main components in an average airplane’s electrical system are the battery, alternator, voltage regulator, bus bar and wiring.

The battery provides stored power for starting the engine. It also provides a reserve of electrical power in case the alternator malfunctions in flight.

Most airplane electrical systems are “single-wire,” meaning that the airframe itself is used as a ground, eliminating the need to run two wires for a positive and ground connection to each electrical component. They are also DC systems, meaning that the components operate on direct current rather than alternating current (AC).

Alternators generate electric current based on the principle of magnetic induction. Any time magnetic lines of force have relative motion with a conductor that is in close proximity, a voltage will be induced in the conductor.

Alternators have an electromagnet (called a rotor) that spins inside multiple windings of a conductor (called a stator). As the rotor spins, the varying north-south lines of magnetic force induce an alternating current in the conductor.

The alternating current is converted to direct current through a series of diodes (rectifiers) that allow current to flow in one direction, but not the other.

The rotor is an electromagnet whose magnetic strength is controlled by the amount of current it receives from the voltage regulator. This allows the voltage output of the alternator to be regulated. If the rotor were made with a permanent fixed-strength magnet, voltage output would be unregulated and would vary with engine rpm.

Aircraft alternators are externally regulated by a voltage regulator (sometimes called an alternator controller), which is usually mounted either on the firewall in the engine compartment or under the instrument panel.

The voltage regulator controls system voltage by controlling the electrical circuit (called the field circuit) that energizes the electromagnet of the alternator rotor. On most single-engine planes, this is accomplished by varying the flow of electric current to the rotor.

Older-style voltage regulators had contact points that would wear over time. Modern voltage regulators are fully electronic and, other than a voltage adjustment screw on some models, are maintenance-free. Whenever one of these units fails, it is simply replaced.

The original manufacturers for most of the single-engine alternators used on Cessna aircraft were Ford, Chrysler, Prestolite or Delco Remy. Ford alternators were the most commonly used type on Cessnas. Many of the original alternator designs are still in use.

The alternator’s rotor gets its electrical connection through two carbon brushes that ride on separate slip rings. One of the brushes transmits positive current from the voltage regulator to the rotor windings and the other provides the ground connection, either from the F2 terminal or from an internal ground to the alternator frame.

This article covers the most common three-wire system. A pilot/owner performing troubleshooting or wanting specific details on how his/her system operates should reference the current wiring diagram for their aircraft’s model and serial number.

Some aircraft are also equipped with an overvoltage sensor that is wired in series between the master switch and the voltage regulator. The sensor must be in the closed, unfaulted position to allow current to flow.

The regulator senses that alternator output is zero and sends full current flow through the field wire, which is connected from the voltage regulator output to the F1 terminal of the alternator. The electromagnet of the rotor becomes energized since it has a complete electrical circuit with power at F1 and a ground at F2.

As the engine starts and the alternator is rotated mechanically with either a belt or gear, the stator windings have an alternating current induced into them from the magnetic field of the rotor.

There are usually three stator windings and a total of six diodes in each alternator. The alternating current from each stator winding is converted to direct current after passing through two diodes.

The output of all three stator windings is rectified and passes as direct current out the B+ terminal, through a heavy-gauge wire to the alternator circuit breaker (usually 60 amp), then to the aircraft bus bar.

The voltage regulator then adjusts current flow to the rotor field as needed to maintain the set system voltage. Always refer to the aircraft maintenance manual for the correct voltage range when setting or checking system voltages.

A good electrical multimeter and a current wiring diagram that is pertinent to the installed equipment on an airplane are necessary to accurately troubleshoot the charging system for faults. 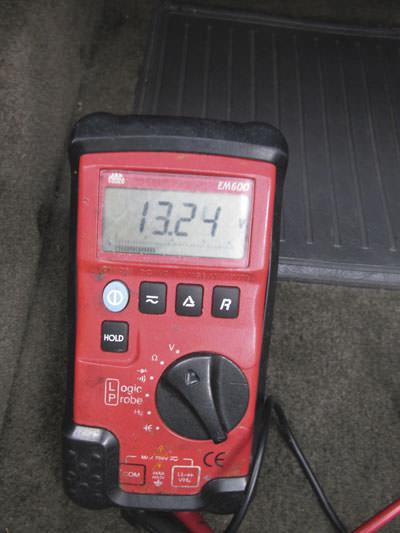 Always check to see if the field (sometimes called the controller) or alternator circuit breaker is tripped before troubleshooting the system.

Assuming a tripped breaker is not the issue, the first step in checking a charging system is to run the airplane and check bus voltage from either an auxiliary power port (e.g., the cigarette lighter receptacle, not a 5-volt USB power port) or from the bus itself.

When checking bus voltage on a 28-volt system, the voltage will have to be checked on the bus itself since the power ports on these planes usually have stepped-down voltages.

You may be able to check system voltage using a panel-mount voltmeter, an engine monitor or a GPS, if so equipped.

Checking the bus voltage is best accomplished with two people, one to run the plane and the other operating the voltmeter.

With the red probe on the bus bar, and the black probe connected to a good ground (the seat track usually works well), the voltmeter will read the bus voltage.

Bus voltage should be checked before starting the engine, and then checked again with the engine running to compare battery voltage (not running) to alternator output voltage (running). If the two voltages are identical, the alternator is not charging at all.

If the alternator is charging, the voltage should be noted and then all the electrical equipment on the airplane should be placed in the on position. With the lights, radios, pitot heat and other electrical components turned on, the alternator should carry the full electrical load and still maintain a positive charging rate.

Alternator is not charging

One of the first and easiest checks a pilot/owner can do when troubleshooting an alternator that isn’t charging is to turn on the aircraft master switch (both the alternator and battery side) and see if the alternator rotor becomes magnetized.

Checking for magnetization of the alternator is done with the engine not running, magnetos off and mixture full lean. It’s also good safety practice to not be near the propeller whenever the battery master switch is being turned on. A stuck starter solenoid could allow the propeller to rotate even though the ignition switch is off.

If the rotor is magnetized and appears to be working properly, the next step is to see if there is bus (battery) voltage on the B+ terminal of the alternator. If there is bus voltage there, it means that the circuit between the alternator output and the bus bar is intact.

Check next for a mechanical defect in the drive mechanism for the alternator. A loose belt that slips or a failed gear coupling on a gear-driven alternator can cause the alternator malfunction.

If all the above checks pass, then the most likely problem causing the alternator not to charge is within the alternator itself. It should be removed for repair.

Alternator is not charging; rotor is not magnetized

If the rotor is not magnetized whenever the master switch is turned on (make sure the field circuit breaker isn’t tripped), the next step in troubleshooting is to see if the rotor is getting both the current and ground it needs to energize the windings.

Check all ground connections for excessive resistance (anything above about 0.2 ohms). Turn the master switch on and check for voltage at the F1 terminal. It should be within a couple of volts of battery voltage.

In the situation where there is voltage at F1 and all the ground connections have good continuity, the alternator rotor itself is probably faulted or the alternator’s brushes have excessive wear.

When there is no voltage present at the F1 terminal, there are several things that could be faulted upstream, interrupting current flow. The aircraft’s wiring diagram will show all the installed electrical components in the circuit as well as the wire numbers.

One of the first things to check in this case is the integrity of the field wire, especially right at the F1 terminal. The crimped terminal connection often breaks over time with vibration. Some engine compartments have a very small space for the alternator terminal attachments and the wires are sometimes routed with sharp bends, causing stress on the crimped terminal ends. The field wire often breaks at or near the alternator terminal.

If the terminal end is in good shape, the field wire between the F1 terminal and the voltage regulator should be checked for continuity and/or shorts to ground.

The voltage regulator powers the field wire and should be checked next. Disconnect the plug for the regulator and see if the regulator is receiving current from the bus. The red-colored wire is usually the wire that provides power to the regulator. Always consult the wiring diagram.

If the voltage regulator has a good ground connection and is receiving bus voltage but is not sending current to the field terminal of the alternator, it is most likely faulted.

The overvoltage sensor opens the power circuit to the regulator if it detects a voltage higher than its preset upper limit. Occasionally the sensor fails in the open position and will not conduct bus voltage to the voltage regulator at all.

Aircraft alternators and electrical systems aren’t complicated once you understand how current flows through the system’s various parts. With a solid understanding of how the system works and an aircraft-specific wiring diagram in hand, combined with these tips for troubleshooting and the assistance of a friendly mechanic, a pilot/owner can diagnose many common problems.