As an aircraft owner and pilot, you can legally perform some maintenance tasks, but you must adhere to strict guidelines when doing so. Steve Ells walks us through packing wheel bearings, while highlighting what’s important to stay legal.

As most readers of Cessna Flyer know by now, all aircraft maintenance tasks must be overseen or performed by an appropriately-rated person. For maintenance tasks, this means an A&P mechanic—or a technician, as some like to be called these days—is frequently both performing and signing off on the work. This mechanic must (by regulation) have up-to-date versions of the appropriate manuals, bulletins, tools and equipment necessary to complete the tasks.

However, there are also a number of maintenance tasks that owners may legally perform. These are termed preventive maintenance (PM) tasks. There’s a long list of them in Appendix A of FAR 43.

What is considered preventive maintenance?

Appendix A is titled, “Major Alterations, Major Repairs and Preventive Maintenance.” Paragraph (c) lists preventive maintenance tasks. Type “Appendix A of Part 43” into your favorite search engine (or find the link in Resources on Page 35. —Ed.).

There is a surprisingly long list of tasks allowed. For instance, owners are permitted to remove and replace batteries, replace bulbs, reflectors and lenses of position and landing lights, and replace prefabricated fuel lines.

They can also remove and replace panel-mounted communications and navigations receivers and update databases in panel-mounted avionics such as GPS navigators.

Great news, right? It is, especially if a pilot has the time and a place to do these tasks. The potential for saving money exists, but much more important is the satisfaction to be gleaned from learning how to take care of your own airplane. (For further reading, see the sidebar on Page 34. —Ed.)

Are you permitted to perform preventive maintenance tasks?

FAR 43.3 paragraph (g) says that “…the holder of a pilot certificate issued under Part 61 may perform PM on any aircraft owned and operated by that pilot which is not used under Part 121, 129 or 135 of this chapter.”

So, according to this section, if the owner and pilot is not using his airplane for hire, whether on a scheduled service, an on-demand service or as a foreign carrier operating for hire in the U.S., he/she can perform PM.

2. He shall use the tools, equipment, and test apparatus necessary to assure completion of the work in accordance with accepted industry practices.

3. Each person maintaining or altering, or performing preventive maintenance, shall do that work in such a manner and use materials of such a quality, that the condition of the aircraft, airframe, engine, propeller, or appliance worked on will be at least equal to its original or properly altered condition (with regard to aerodynamic function, structural strength, resistance to vibration and deterioration, and other qualities affecting airworthiness).

In other words, if you’re going to do PM, you must follow the procedures in the manuals. It’s as simple as that.

Another peculiar-to-aircraft trait is this: the strength versus weight equation must always be kept at the forefront of every operation and decision. In other words, if you believe that more is better, whether it be the size of a bolt or the amount of torque, you’re going to do more harm than good.

Gathering the manuals and bulletins to meet the requirements of the FARs is much easier and less expensive than it used to be. The secret is the internet. Manufacturers have come to realize that making their manuals and bulletins available at no cost or consolidating a double-shelf full of manuals onto a CD is a sound idea, simply because access to manuals makes it much easier for maintenance shops (especially smaller shops) to access the precise methods and techniques the manufacturer has developed for maintaining its product.

So, step one for owners that want to start working on their airplanes is to have or have access to manuals, and either have the tools or be able to manufacture the tools required to properly perform each maintenance task.

Let’s look at an example of why manuals are important.

Greasing the wheel bearings on an airplane may seem simple. At its most basic, it can be described in the following steps: First, jack up the airplane or axle enough to get the tire off the ground, then remove the axle nut and pull the wheel/tire assembly off the axle. Next, remove each bearing, clean it and the bearing race, inspect for damage or corrosion, replace if necessary, pack with grease and reinstall. Finally, reinstall the tire/wheel assembly, tighten the axle nut and lower the tire to the ground.

Not so fast. There’s more to it. In fact, there’s quite a bit more.

To remove the tire/wheel assembly (TWA), the brake assembly must be partially disassembled. This disassembly requires the removal of two or four bolts to release what’s called the brake back plate(s). The TWA can be removed only after the back plate(s) have been removed.

Assuming the airplane has been jacked up far enough to lift the TWA, a large cotter pin must be removed prior to removing the axle nut. Then, the TWA can be pulled from the axle.

There is an inner and an outer bearing. From the earliest parts manuals, Cessna breaks out the parts in wheel assemblies. The bearings are always referred to as cups—often called the “race”—and cones—which are often called the bearings.

What grease to use?

Pre-1962 Cessna single-engine service manuals suggested that wheel bearings be cleaned and greased at the first 100 hours time-in-service, and thereafter at 500-hour intervals, unless operated in extremely dusty or sandy conditions.

The manual specifies MIL-G-25760 grease. However, there’s also a sentence that says that the military specifications are not mandatory, but are listed to serve as a guide. It goes on to say that most products produced by reputable manufacturers meet or exceed these specifications.

I personally like the 500-hour greasing interval. Unless I’m performing maintenance on an airplane for the first time, that’s the interval I use.

Cleveland, the manufacturer of brakes and wheels used on Cessna singles, suggests the use of Mobil SHC™ 100 grease.

After the TWA has been removed, the bearings are removed. This usually requires the removal of a snap ring, a washer, a felt grease seal and another washer.

Bearings are then cleaned with Stoddard solvent, applied by either an air-powered solvent sprayer or a brush. Air can be used to blow the grease out, but never spin a bearing by directing compressed air perpendicular to the rollers.

Directing a stream of air across—not between—the rollers in roller bearings is dangerous because the bearing cage is designed only to maintain the spacing between the rollers. It’s not strong enough to contain the rollers when they rotate at a high rate of speed; in other words, directing air across when bearings can result in fast-moving projectiles.

After the bearing is clean and dry, look for corrosion and/or pitting. If found, replace the bearing and matching race.

Bearings are repacked by putting a gob of clean grease in the palm of either hand and forcing the grease up into the bearing. Press the bearing down into the grease until the bearing comes into contact with your palm. Repeat this procedure until grease appears at the top of the bearing cage.

The last step is to look at the grease seals. For decades, Cleveland, the manufacturer of most GA wheels and brakes, has used felt pads to seal against sand and fine dirt. These seals are inexpensive and work well.

Recently, Cleveland has replaced the felt pads with molded rubber grease seals. These may be used in place of the felt seals.

Putting it all back together

Thread the axle nut onto the axle.

How tight should it be? I couldn’t find definitive information on how tight the axle nut should be. Field experience suggests to tighten the nut up well to seat the bearings, then loosen it until you can feel a slight movement of the wheel in and out on the axle, then snug it back down until the TWA spins without resistance and no in-out movement is felt.

Now, to reassemble the brake. Two or four bolts were removed so the back plate could be removed to free the brake disc from the inner and outer brake pads.

Whenever I have a TWA off the axle, I clean up the brake guide pins with a Scotchbrite pad. I also clean the guide pin holes in the torque plate. These guide pins must slide in and out to allow the brake to self-adjust as the brake pads wear.

The devil is in the details

The last step is often missed as it’s not in the Cessna manual. It’s found in the Cleveland Wheels and Brakes Component Maintenance Manual, Appendix A titled, “Wear Limits and Torque Values.” This manual, and all of the Cleveland wheel and brake manuals, are available for free on the Cleveland website. Start by downloading the Technician’s Service Guide. (See link in Resources. —Ed.) 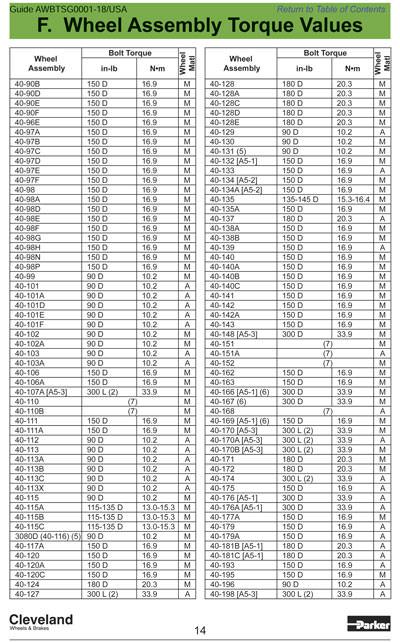 This critical step in reassembly is applying the proper torque to the two or four back plate tie bolts. Overtorqueing the bolts can deform the brake housing.

The proper torque on almost every Cessna single engine brake is 75 to 90 inch-pounds (6.25 to 8.5 foot-pounds). That ain’t much. It doesn’t need to be much since these bolts aren’t in a compression application. They are loaded in shear, and as long as these bolts are snugged down to the proper torque, that’s sufficient.

The good news is that owners can legally do a lot of work on their airplanes. However, as mentioned, there are catches. Catch No. 1 is that you must own or have access to the manuals. Catch No. 2 is that you must enter the work you performed in the aircraft records in a manner that’s acceptable to the Administrator. That’s FAA talk for the head of the agency.

The requirements for these entries are listed in FAR 43.9. It says if you perform PM, you shall make an entry in the maintenance records containing the following information:

1. A description of the work performed.

2. The date the work was completed.

3. The name of the person performing the work.

4. If the work was performed satisfactorily, the name certificate, certificate number and signature of the person performing the work. The signature constitutes an approval for return to service only for the work performed.

(This is a summary of FAR 43.9. Please refer to Resources for a link to the complete text. —Ed.)

Notice that the regulations do not require the entry to include the aircraft total time or tach time, but it’s extremely helpful to include that information.

An example1 of an entry for the work described above would read:

Month/day/year. “Greased left and right main landing gear wheels in accordance with information in the Cessna (model number) service manual and the Cleveland Wheel and Brake Component Maintenance Manual, Appendix A, paragraph A3.”

The point of this article is to make sure owners understand the freedom and the limitations that are part of owner-performed PM. Go ahead and do it, but make sure you do it right; by the book.

1For more about complete and detailed logbook entries, see “Deciphering Logbooks” by Kristin Winter in the November 2017 issue.