Short of sitting in the front row of a Metallica concert for a few hours, there are few things that compare with the hearing damage a piston engine-powered airplane can cause.

In fact, until recently, you could spot a longtime pilot at a social gathering by homing in on the person who said "Huh?" a lot in spite of the fact he or she was under age 60. Throw in a sun-damaged face plus a Breitling Navitimer wristwatch (real or fake), and there would be no doubt you were in the company of a fellow pilot.

Nowadays, a fancy watch may be your only clue. With the advent of good sunscreen and noise-reducing headsets—particularly those that also offer an Active Noise Reduction (ANR) feature—there are few pilots that waltz around the skies without sunblock and hearing protection.

Every technical subject has its own set of buzzwords and the subject of noise reduction is no different. The Big Daddy of buzzwords is "decibels," or as those in the know say, "dB."

According to Wikipedia, the decibel (dB) is a logarithmic unit used to express the ratio between two values of a physical quantity and is usually measured in units of power or intensity. (The term "logarithmic" means a scale of measurement displaying the value of something using intervals that correspond to orders of magnitude, rather than a linear scale.)

So what does that mean in terms non-engineers can understand?

For the subject at hand—the ear-splitting noise inside a light airplane—the value dB is measuring how loud something is compared to the level of normal background noise without all the commotion made by motors and of wind rushing past the cockpit.

The usual way to understand all of this is with a graph. Take a look at Figure 1. The first thing to look at is the "X" axis which runs horizontally. 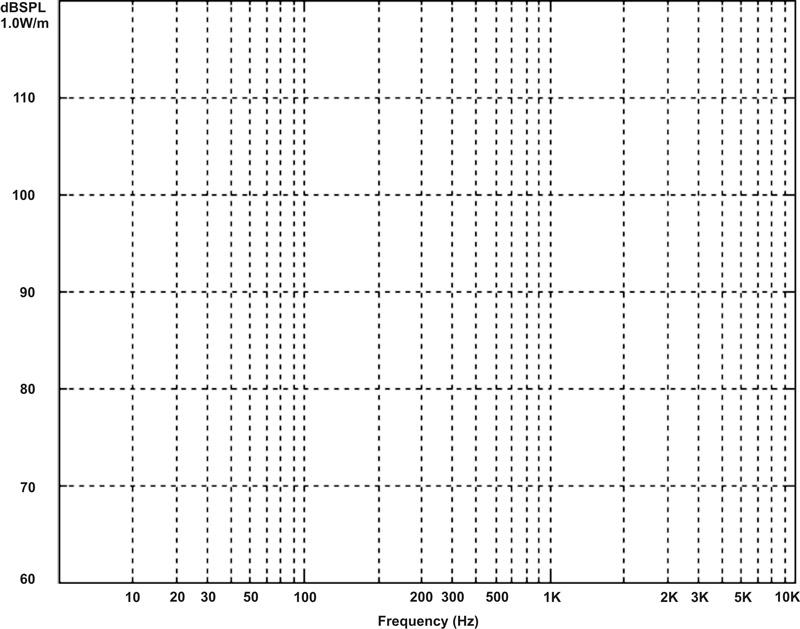 Check out the numbers on the X axis, which are audio frequencies. See how they aren't spread equally (linearly) across the graph, but rather appear in groups? The first group is from one cycle per second (buzzword: "Hertz") to 100 cycles per second. Notice also that the frequencies themselves within the group are not linear either.

Next there is a second group, from 100 to 1,000 Hertz. And again the individual frequencies are not spaced linearly. Continuing along the X axis, you have another group from 1,000 Hertz to 10,000 Hertz. These frequencies groups—and the frequencies within the groups—are displayed logarithmically.

Looking at the "Y" (vertical) axis, you can see the intensity scale, measured in dBSPL ("SPL" is another buzzword representing "sound pressure level"). From the graph, you'd think that 2 dB is twice as much as 1 dB but that's not correct as far as how the ear perceives sound. In order to double the apparent intensity of a sound wave to the ear, you have to increase the signal by 3 dB. By the same token, if you lower the intensity by 3 dB, you halve the apparent loudness.

This is an important thing to keep in mind when you're reading noise reduction specifications. 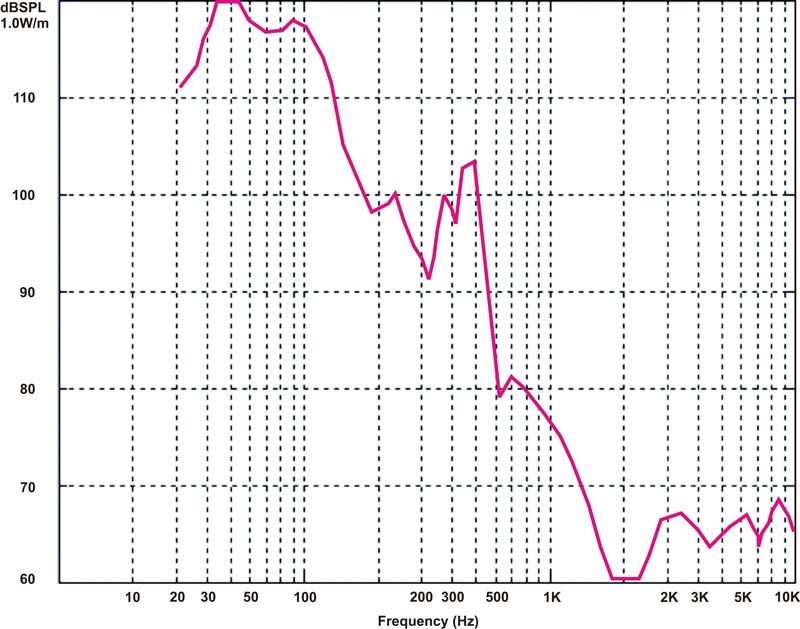 Looking at this graph, the most obvious feature is how much of the noise in the cockpit is clustered between 20 Hertz and just less then 500 Hertz. This is noise coming primarily from the engine(s) and it's 40 dB louder than the noise coming from the prop(s) and the slipstream.

Although the brain has built-in frequency filters which can attenuate certain frequencies to a degree (so you can pick information out of noise), the net effect of extremely loud noise is to overload the sense of hearing plus cause fatigue. It's a bad situation that eventually damages hearing permanently and degrades the ability to hear speech properly immediately. 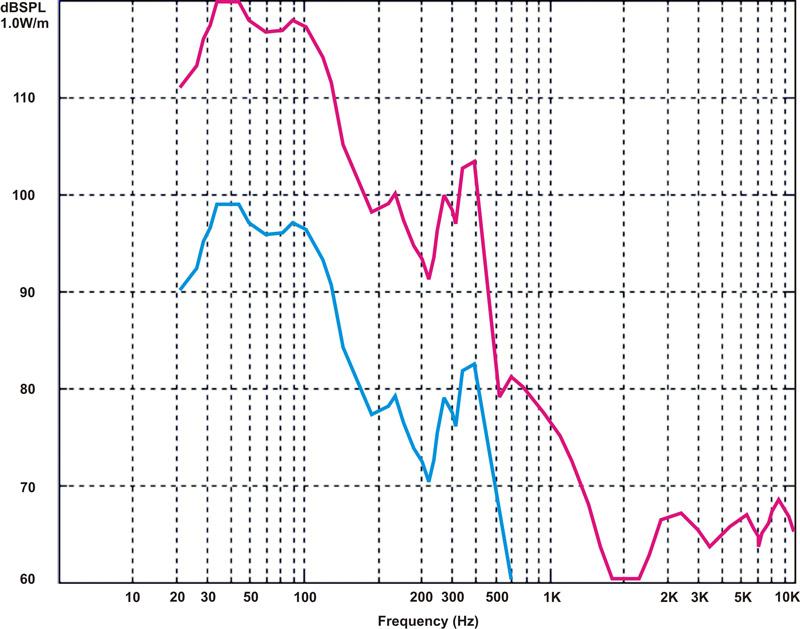 The blue line on Figure 3 shows the attenuation you can expect from a high quality PNR-only headset. The good ones reduce the noise from 19 dB to 24 dB and, as you can see from the graph, they reduce the noise linearly across the audio spectrum (meaning all frequencies are reduced the same amount).

But with most of the noise contained in the low frequencies, wouldn't it be better to reduce that noise level more than the upper frequencies? That's what the Active Noise Reduction (ANR) design engineers thought, too, so look at what happens when you add ANR to PNR. 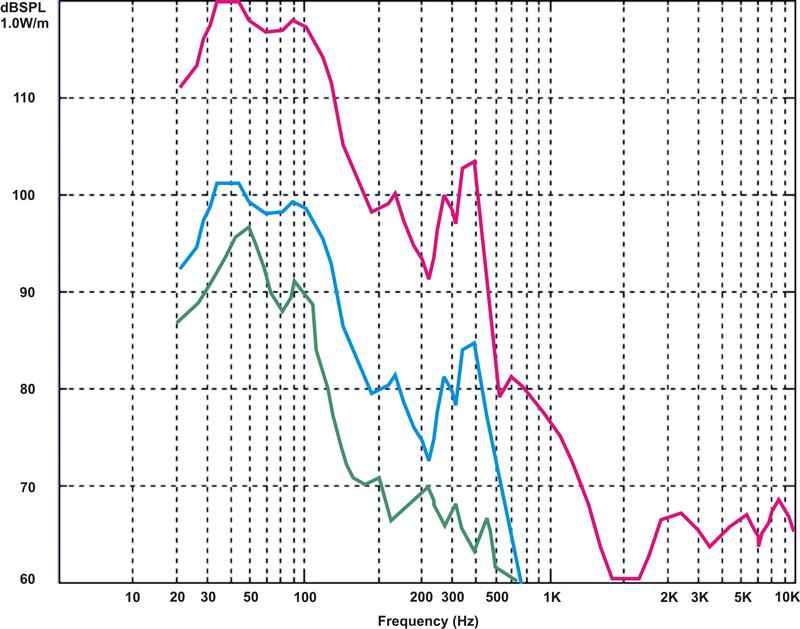 Figure 4 shows the effect when you turn on the ANR feature (green line) of a good PNR+ANR headset. Doing so adds anywhere from 12 dB to nearly 20 dB more attenuation in the frequency range between 20 Hertz and 500 Hertz—right where the engine noise lives. This is in addition to the 19 dB to 24 dB of passive noise attenuation you already have.

ANR works by introducing an exact duplicate of the cockpit 30-to-500-Hz spectrum into the headset after flipping the phase of the signals 180 degrees. This cancels the sound in that band as far as your brain is concerned. By doing this and adding PNR reduction, these PNR+ANR headsets attenuate low frequency noise to the level where bone conduction takes over and additional headset attenuation is impossible.

But what of those expensive ANR-only headsets that do not clamp the head tightly? They have an excellent reputation and do not claim much in the way of PNR properties at all. How is that possible?

Non-PNR headsets with ANR capabilities only are worn on the ear as opposed to over the ear. As a result, they are much more comfortable, but also generally much more expensive than PNR-only or even PNR+ANR headsets.

They greatly attenuate the low frequency band and also electronically process portions of the audio spectrum dedicated to human speech. If you can afford them, they will attenuate low frequency noise as much as a conventional PNR+ANR headset and also help you better understand ATC and intercom conversations. To those with significant hearing loss, they are a godsend.

The exact methodology they use (which frequencies they reduce, which ones they enhance, and how much processing they do) is a closely held secret. They certainly work well, but are they worth the money they cost? The graphs below are aimed at this question: do regular, less expensive, PNR-only headsets help us hear ATC enough, or do we need the PNR+ANR or the ANR-only headset?

Let's take a look at what it takes to hear and understand the spoken word and see if biting the bullet and paying for a more expensive headset make sense. 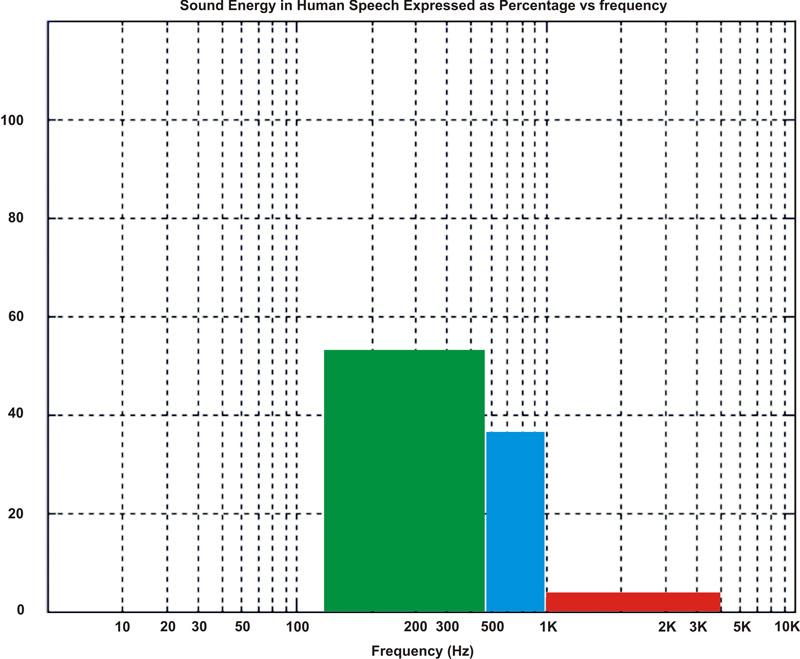 In Figure 5, we can see the sound level percentages of the three primary frequency bands present in human speech. Although the tone and timbre of the human voice is different for males and females, these frequencies are the three bands used for 83 percent of human speech. Notice that there is around 55 percent energy present between about 125 Hertz and 500 Hertz; 35 percent between 500 and 1,000 Hertz; and only 4 percent from 1,000 to 4,000 Hertz.

But there's more to it than just sound energy levels.

What's even more important is where the most speech intelligibility is located within those three bands—in other words, which frequencies cause you the most problems communicating if you cannot hear them well? 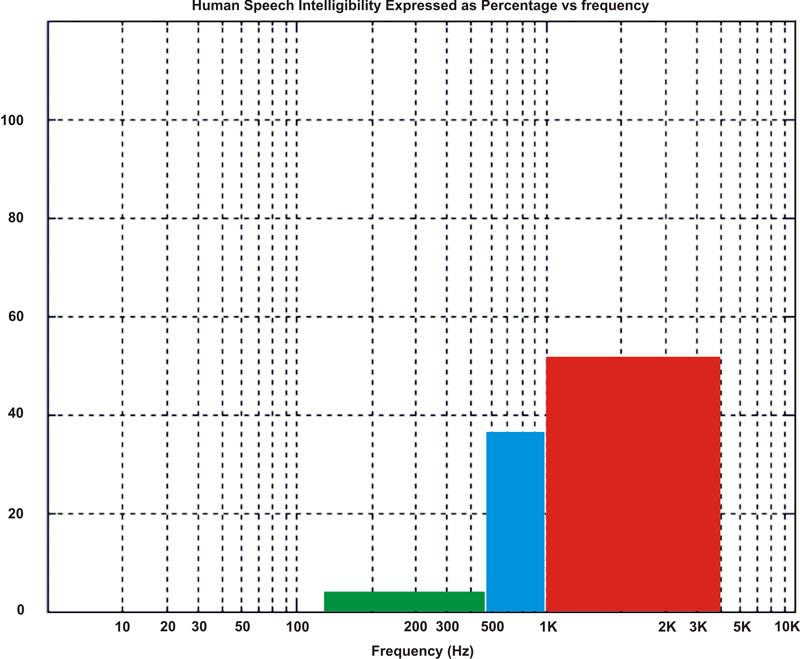 Look at Figure 6. The frequencies you need to hear are not the ones with the most energy! 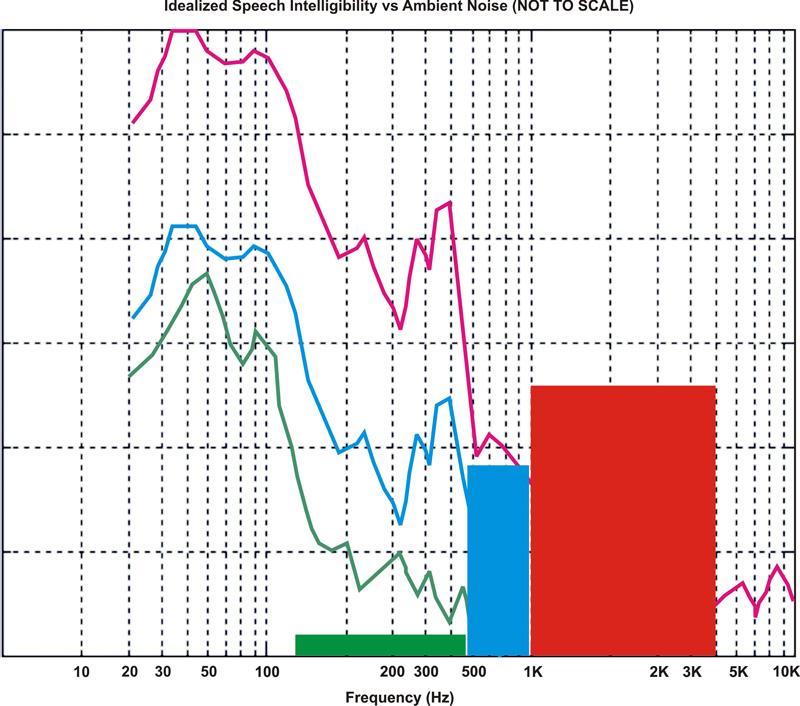 In Figure 7, we can see the whole picture. What's happening with noise-reducing headsets is the brain is relieved of having to filter out the low frequencies. That's good, but the brain still can't do the job of enhancing the frequencies where human speech intelligence is contained. It needs external help with the frequencies above 500 Hertz—particularly those from 1,000 Hertz to 4,000 Hertz.

If you use PNR-only noise reducing headsets, you're not nearly as sound fatigued at the end of a long flight and you do understand the spoken word a little bit better as a result of some noise reduction in the 20 to 500 Hertz area. The improvement is much greater with PNR+ANR. The PNR+ANR headset attenuates ambient noise to an extent and also attenuates the low frequency noise where the 40 dB overload is occurring, so people will certainly understand speech better.

But since the over-the-ear ANR-only headset reduces fatigue (both sound fatigue and physical fatigue), negates low frequency noise as well as a PNR+ANR headset, and enhances the frequencies associated with human speech, that's the clear winner overall.

John Loughmiller is a 4,600-hour commercial pilot and CFII MEI-A. He lives in Kentucky with Donna, his wife of 39 years, and often commits random acts of aviation. Send questions or comments to .