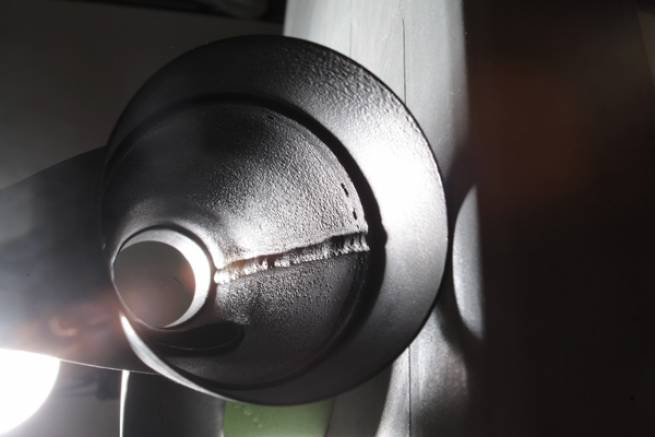 Three defects can show up on exhaust systems; read on to find out exactly what they are and how to find them.

Light airplane exhaust systems don't garner as much attention as a carburetor or induction air filter, yet these systems must be maintained as attentively as any other engine accessory, if not more so. That prosaic exhaust system is the only fire control system under your cowling.
Exhaust systems rarely rate a second thought. Why? Because unless your airplane is turbocharged or turbo-normalized, the exhaust system doesn't have any moving parts—it just sits there.
Light aircraft exhaust systems are designed to collect hot exhaust gases from each cylinder and route these gases safely out of the engine compartment. Systems in single-engine airplanes also flow the gases through rudimentary metal heat exchangers that radiate heat to outside air that's used to provide cabin and carburetor heat.
It's common to mistakenly believe that these heat exchangers are mufflers because they look like an automobile muffler. Some heat exchangers include internal baffles designed to slow the exhaust gases in order to increase the amount of heat transfer. Twin-engine Cessnas don't have these heat exchangers; they utilize Avgas fuel combustion heaters for cabin heat. (For an in-depth look at combustion heaters, refer to the November 2014 issue of Cessna Flyer. —Ed.)

1020 carbon steel,
321 stainless steel and Inconel
The most common metals used for light aircraft exhaust systems are 1020 carbon steel, 321 stainless steel and Inconel. Carbon steel systems are used on low-powered aircraft. Although companies still manufacture carbon steel systems for these applications, many also manufacture identical FAA-PMA approved systems using the more durable 321 stainless steel.
Grade 321 stainless steel is non-magnetic, ductile, tough and easy to form and weld. The 300 series of stainless steels are a common chromium-nickel alloy. Stainless steel 321 has been around since the middle of World War II when a British company developed it to combat the detrimental effects of carbon by adding titanium. (According to one source, the British developed it for use in the Whittle turbine engine.) It's an ideal metal for light aircraft exhaust systems.
However, because 1,600 degrees F is the upper limit of the no-creep range for 321, Inconel is substituted for the high-temperature portions in systems used in turbocharged and turbo-normalized systems. Inconel is also a nickel-chromium based superalloy. This superalloy is used because of its high resistance to high temperature creep and oxidation.
Inconel alloys have long been used in aerospace applications: skin sections of the North American X-15 were Inconel. Inconel alloys are used in SpaceX's Merlin rocket engine that powers the Falcon 9 launch vehicle. (You can use these Inconel facts to win a bar bet, too: "Guess how my turbocharged Cessna is like the X-15?")

Exhaust inspections
I'll say it again; the exhaust system of your airplane must be treated like any other engine accessory. This means the exhaust system should be sent to one of the exhaust system repair shops, such as Cessna Flyer Association supporter Acorn Welding, at engine overhaul.
These specialty shops will refurbish the system by resurfacing the flanges and freeing up the slip joints as well as repairing or replacing any worn sections. Despite the need for R&R from a qualified professional, a good percentage of the time the entire system is simply removed and stowed out of sight under a workbench until it's time to reinstall.
There are three defects that show up on exhaust systems, and one on the heat exchangers. Leaks are the biggest offender; next on the list are cracks. Last is age-related deformation and material breakdown.

Leaks and cracks
Since engines grow (i.e., expand) as they reach operating temperature, exhaust systems must also be able to grow. The most common way to allow for exhaust system expansion is through the use of slip joints and two-piece clamps.
A slip joint is two exhaust pipes with one section sized to fit snugly into the other section for approximately two inches. All exhaust slip joints should be lubricated with a product called Mouse Milk at every annual or 100-hour interval. Mouse Milk is also used to lubricate turbocharger and turbo-normalizer wastegate shafts.
When the tubes in a slip joint can't slide and rotate to accommodate the engine expansion, stresses are induced in the system. These stresses can cause cracks and exhaust leaks at the exhaust flange-to-exhaust port segment of the cylinder.
Exhaust leaks are pretty easy to see, since exhaust gas deposits are gray and often have a powdery appearance. If the leaks are big enough this telltale gray residue will be visible on the fuselage aft of the engine cowling.
Always be on the lookout for the presence of grayish deposits during preflight inspections. When a leak is found early enough, there's a good chance it can be economically repaired.
The most common place for exhaust leaks is at the joint between the flanges of the exhaust system and each cylinder exhaust port. It's more common to see exhaust flange leaks on Lycoming engines than Continental engines since Lycoming uses two studs at each exhaust port to secure the exhaust, while Continental uses four.
It's very important to fix these leaks as soon as possible since the pressurized hot exhaust gases will rapidly erode the aluminum of the cylinder exhaust port. If detected early enough, one solution is to try another type of gasket.
If the leak is much advanced it probably has eroded the aluminum of the cylinder enough to require a repair. If the damage is moderate, there are tools that are used to reface the port in position on the engine. Severe erosion can only be repaired by removing the cylinder and sending it out for a weld repair to reface the port.

Gaskets
There are three types of cylinder-to-exhaust system gaskets. These are known as the spiral wound (sometimes called "no-blo"); the copper/asbestos/copper sandwich; and the Airborne solid copper (or steel) blo-proof gasket.
Exhaust gasket part numbers called out in Continental Motors (formerly Teledyne Continental Motors) and Lycoming engine parts manuals both specify spiral wound (no-blo) gaskets. These are fine if both the cylinder flanges and exhaust system flanges are in excellent, like-new condition and the slip joints are free. But sometimes they leak.
I've had very good luck using two Airborne solid copper blo-proof gaskets. These FAA-PMA approved replacement gaskets fill small gaps when the system is reinstalled. (The Airborne Manufacturing Co. was founded in the late 1950s and is today owned by CFA supporter Parker Hannifin Corp. These gaskets can be found for sale at several aviation parts houses. —Ed.)

Those super-dangerous
heat exchanger leaks
If a crack or leak in the heat exchanger lets hot exhaust gases escape to mix with the incoming ram air before the heated air enters the cabin, the pilot and passengers are in grave danger.
Humans rarely realize it when they are being poisoned by carbon monoxide gas. Carbon monoxide (CO) is a tasteless, odorless, invisible gas that binds much more readily to the blood supply's hemoglobin than does oxygen.
Common symptoms of CO poisoning are nausea, headache, vomiting, dizziness and fatigue. Any time any of these symptoms is suspected, turn off the cabin heat and land as soon as possible. CO has a five-hour half-life in the human body, so it takes a while to recover from this poisoning.
In my opinion all pilots should purchase and carry a carbon monoxide detector when flying. I am a strong advocate of any detector that sounds a loud alarm. (The little paste-on, color-change ones are too easy to overlook, in my opinion.) I bought my airplane's CO detector from AeroMedix—but even one purchased from a hardware store is better than nothing.

A pilot's exhaust system inspection
Plan each flight so that you have enough time to do a thorough preflight. The pilot is the first line of defense against in-flight problems.
If your airplane is equipped with a cowling that permits a good engine inspection, I recommend using a flashlight to look closely at the junction where each exhaust system flange mates with each cylinder exhaust port. You're looking for missing bolts and grayish deposits. Give the entire system a good inspection.
If your airplane cowling doesn't open easily, look closely for grayish deposits on the forward fuselage skin.
If possible, shine your flashlight up the exhaust downpipe to look for obstructions. There have been many more than a few off-airport landings when metal from the internal baffles in the heat exchanger has broken free and blocked the exhaust downpipe.
Exhaust systems, just like every other component on all airplanes, do wear out. The most common indication that your system is reaching the end of its effective (and safe) life is a change of color. Long-term exposure to exhaust gases causes gradual changes to the metallic structure.
A worn-out pipe or system is characterized by a bluish-black color and the appearance of small bumps or eruptions on the surface. Severely worn pipes will no longer have a smooth outer surface, but will look lumpy and saggy as the metal "flows" due to strength loss. When these signs appear, it's time to buy a new system.
Inconel systems last much longer than stainless steel systems, but still need to be removed and sent to an experienced aircraft exhaust shop for refurbishment at engine overhaul. The outside surface of an Inconel system can look as good as new during a visual inspection—even when the metal is severely eroded—because Inconel pipes erode from the inside out. Failure consists of pinholes that open up without any warning.
Fortunately companies such as Acorn Welding and other reputable companies have obtained FAA Parts Manufacturer Approval (PMA) for replacement systems that are superior—due to construction methods and time-tested techniques—to the original exhaust systems.

Steve Ells has been an A&P/IA for 43 years and is a commercial pilot with instrument and multi-engine ratings. Ells also loves utility and bush-style airplanes and operations. He's a former tech rep and editor for Cessna Pilots Association and served as associate editor for AOPA Pilot until 2008. Ells is the owner of Ells Aviation (EllsAviation.com) and lives in Paso Robles, Calif. with his wife Audrey. Send questions and comments to .