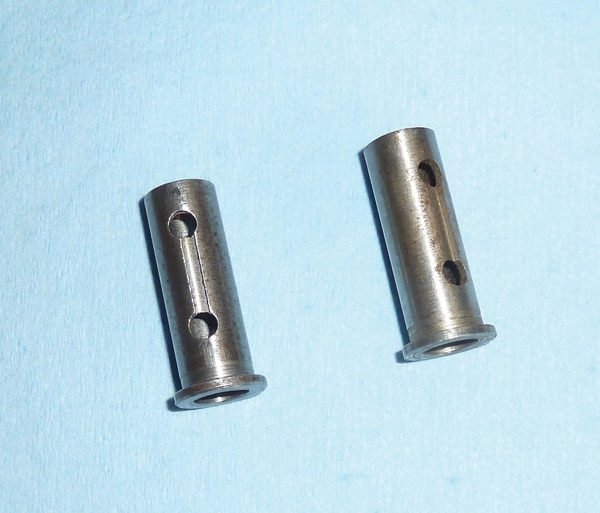 Landing gear bushings are usually simple and often not worth having them made—but when you need an oversized one for a repair, or when the extra design feature of two holes and a channel for grease flow make it a $200 part from the OEM, owner produced may be the best option.

A&P/IA Kristin Winter explains FAR 21.9 and Advisory Circular No. 23-27 for owners who are looking to keep their aircraft maintenance costs in line.

THE FAA keeps an iron grip on the supply of approved replacement parts for Type Certificated aircraft. Replacement parts generally must come from the airframe, engine or propeller manufacturer, or from an approved source that has been issued Parts Manufacturing Approval, commonly referred to as a PMA.

There are some other limited exceptions for what the FAA refers to as “standard” parts, such as nuts, bolts and other hardware manufactured under an industry standard such as AN (Army-Navy) or MS (Military Standard), or parts manufactured by a repair station.

There is one major exception to the FAA’s tight grip, and that is the owner produced part. Owner produced parts are commonly used by the airlines, which often have a large fleet of the same or similar types of aircraft.

Like the owner of a General Aviation aircraft, an airline often wants to avoid the high cost of commonly used parts from the original equipment manufacturer (OEM), so it will reverse engineer and produce batches of parts that are then used in its fleet. An example might be landing gear bearings that wear out frequently.

The availability of owner produced parts appears to go back for decades, though the origin is unclear. As it is of biggest benefit to airline operators, there is a major constituency to make sure that owner produced parts remain an available solution for all aircraft owners and operators.

The FAA sets out the limitations on replacement parts in FAR 21.9.

This simple statement leaves lots of questions unanswered. One common question is: must the owner or operator physically produce the part themselves? Most GA aircraft owners may not be equipped or sufficiently skilled to make a part in their basement. Fortunately, the friendly FAA has provided an interpretation.

When the FAA renumbered and revised Part 21 in 2009, it specifically made mention in the Federal Register that the interpretation memorandum issued on Aug. 5, 1993 was still operative.

The answer to the first common question as to whether the owner/operator must physically produce the part is clearly no. The FAA memorandum states that “An owner would be considered a producer of a part if the owner participated in controlling the design, manufacture or quality of the part.”

The memorandum goes on to provide five nonexclusive indicia that an owner “participated” in the production of the part:

2. The person provided the manufacturer with materials from which to manufacture the part.

5. The person supervised the manufacturer of the part.

So what does this mean to our aircraft owner faced with the unavailability of a critical part, or who is suffering from cardiac arrest at the cost and time delay of obtaining the part from the original equipment manufacturer?

It is important to keep in mind that it is the owner or operator’s obligation to produce a part that is airworthy, meaning that the part conforms to type design and is safe to install in the aircraft.

The installing mechanic’s responsibility is only to make a reasonable assessment that it is an airworthy part and to install it properly. (It will likely help the mechanic feel comfortable if they are provided with a copy of the drawing, the specifications, and/or have been part of the process from the beginning.)

Ways an owner can participate

Two options for owner participation jump out of the memorandum on first blush.

First, the owner can provide the part to an appropriate manufacturer (such as a machine shop) and ask them to duplicate it.

The other option is if an owner supervises the production, which might involve working with the mechanic to fabricate the part. Supervision would not likely require an owner to stand there every moment, but to be reasonably available to provide supervision or answer questions.

In practice, owner supervision might be a little difficult given the likely disparity of knowledge between the owner and the mechanic. However, if the owner is willing to certify in the logs that he or she supervised the production of the part, it is unlikely to be challenged.

So let’s look at some practical applications. Not long ago, I determined that it was time to replace the flap tracks on my twin. I had spoken with another owner who had the same problem, and we agreed to pool our resources to obtain some owner produced parts.

I obtained an exemplar track and sent it to a metallurgical lab for analysis to determine the proper material. The lab charged a bit over $200 for the testing and provided a formal report. The other owner produced a drawing of the part.

Armed with material and drawing, we had a couple of ship sets made. The cost was about $75 each, and the sets were created in five working days (turnaround can vary depending on how busy the shop is), compared to a cost of over $300 each from the manufacturer and a wait of unknown duration.

We clearly met the first example of conditions that qualified me as participating in controlling the design of the part. (See photo, page 32.)

One of the most useful options for the aircraft owner is the specific acknowledgement by the FAA legal memorandum that an owner may provide the part and ask that it be duplicated.

There is one complexity here in that many machine shops can duplicate a part, but are not equipped to determine what material it was made from. That might mean that the owner will need to resort to the metallurgical testing lab as we did with the flap tracks.

Consideration must also be given to whether the part had any protective coating which should be duplicated. This could mean having the completed part anodized or cadmium plated.

All of this may make it uneconomical to use the owner-produced exception if one is simply trying to avoid purchasing an overpriced bushing from the manufacturer.

This is an area where an active type club that maintains a database of parts that have been owner produced—and possibly test results, and even CNC programs—can be most helpful. There appears to be no requirement that participation in the design requires an owner to reinvent the drawing, material specs, etc.

There are some gray areas still, even with the FAA’s memorandum. Take, for instance, a retractable gear single with a loose bushing where the nosegear pivots. The boss in the mount is worn slightly oversized so that bushing is no longer a press fit.

A repair involving an oversized bushing might be a cost effective solution, provided your mechanic is comfortable making that repair.

As the owner, you send the bushing to the lab and sketch out a drawing with the dimensions that have the bushing .001 inch wider than the factory.

With the material specification in hand and the dimensions, you may then have a machine shop fabricate one. I have done this with great success and the only way I could tell a new OEM bushing from the oversized one was to get out a micrometer. (See photo, page 33.)

Success here will require a mechanic comfortable with the oversized bushing being an acceptable minor repair, so it is important to discuss this with your mechanic before embarking on such a repair.

It is not unreasonable for the mechanic to ask the owner to make a logbook entry that they provided a part produced under FAR 21.9(a)(5) and provide the information used for its manufacture.

Why not use a commercially
available part?

Any discussion of owner produced parts seems to raise the question about whether an owner can just go and buy the part which is commercially available.

One example of this might be a common bearing. For instance, the Timken 13889 wheel bearing is commonly used in Cleveland wheels that are utilized on many different Cessna products.

One can likely get the same item from the local auto parts store or a bearing supply company for $25 to $30—but is that legal?

As an owner produced part, the interpretation seems to suggest that it is not, though to my knowledge that hasn’t been clearly addressed.

If the aircraft owner got out the calipers and confirmed that the auto parts bearing was the same size, number of rollers, etc., arguably that would qualify as participating in the quality control of the part. This is another gray area.

But there is one more option. For a higher performance plane, it is probably worthwhile to obtain a PMA version of the bearing from McFarlane Aviation. The peace of mind might make it worth the additional cost.

Note that the operative deadline is not when the aircraft was produced, but when it was certificated—so even a late model Cessna Skyhawk is going to qualify, as it was Type Certificated before 1980.

Directly applicable to our example is the provision that states that “You may substitute parts where a direct substitute for a part/material can be found under manufacturer part number, military specification, or other recognized standard, such as the SAE.”

For most aircraft owners, AC 23-27 can provide a route for substituting an industry standard part for an OEM part which may no longer be available in a timely manner or for a reasonable price. Mil-Spec switches, SAE alternator belts, batteries, etc. can often be used under the guidance of this Advisory Circular without resorting to an owner produced part.

For those of us who cannot afford a new or nearly new aircraft and who don’t have the luxury of just dropping off our plane at the local OEM service center with the keys and the Visa card, FAR 21.9 and AC 23-27 can be helpful in keeping aircraft maintenance cost effective, while still meeting the regulatory requirements.

Kristin Winter has been an airport rat for almost four decades. She holds an ATP-SE/ME rating and is a CFIAIM, AGI, IGI. In addition, Winter is an A&P/IA. She has over 8,000 hours and uses her aircraft in furtherance of her aviation legal and consulting practice. Send questions or comments to .

Both documents are available at CessnaFlyer.org/Forums under “Magazine Extras”