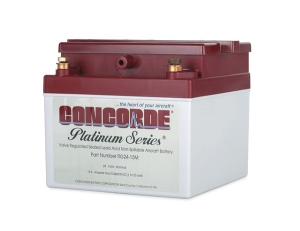 Jacqueline Shipe, A&P, explains the technology and preventive maintenance for aviation batteries in her sixth DIY article targeted to owner-pilots.

The bulk of the items listed in FAR 43 Appendix A, paragraph (c) that an owner may legally perform on his or her owned aircraft are primarily maintenance tasks that have to be performed on a fairly regular basis.

All batteries begin to degrade in performance from the moment they are placed in service. The constant chemical reactions that take place cause an ever-increasing lack of efficiency within the battery. This is especially true of batteries that are allowed to run down and remain in a low or depleted state.

Lead-acid batteries are the type used in almost all General Aviation planes and are becoming more common for turbines employed in low-cyclic applications like medevac. (Turbine powered planes in high-cyclic applications (i.e., airliners) often have nickel cadmium or “NiCad” batteries installed. These batteries are costly, and the servicing requirements are much more complex than for the lead-acid batteries. NiCad batteries should only be serviced by a professional.)

Anatomy of a battery

A lead-acid “flooded” battery consists of multiple cells enclosed in a plastic case. Each cell consists of alternating sets of lead plates.

The plates are immersed in an electrolyte solution of sulfuric acid and water. Removable caps allow an owner to inspect and adjust the electrolyte level of the battery.

As a battery discharges, the sulfuric acid in the electrolyte solution is converted into lead sulfate on both the positive and negative plates. Lead sulfate is not conductive. As it grows on the plates, covering more and more of the surface area, it reduces the efficiency and output of the battery.

The discharge process also makes the electrolyte far more watery as the sulfuric acid is depleted. Batteries not only discharge under an electrical load, but they also self-discharge when not being maintained in a fully charged state.

If a battery is left for a prolonged length of time in an uncharged state, it will eventually completely discharge once the plates become so coated in lead sulfate that no more exchanges of electrons or ions can take place.

A battery which remains in a depleted state of charge for a prolonged period of time forms lead sulfate that eventually hardens and crystallizes on the plates to the point that it can’t be converted back into its original components of lead oxide, pure lead and sulfuric acid—no matter how long the battery is left on a charger.

Maintenance-free or “sealed” batteries have non-removable covers and the electrolyte level cannot be adjusted. These sealed batteries go by a variety of names: RG, or recombinant gas; AGM, or absorbed glass mat; and VRLA, or valve regulated lead acid.

These batteries use a fireproof glass mat separator between the positive and negative plates. The glass mat is saturated with electrolyte and the mat’s microporosity allows the hydrogen and oxygen to recombine.

VRLA batteries are designed to recombine the gases generated during the charge-discharge process and to maintain electrolyte throughout the lifespan of the battery, which makes them maintenance-free for the aircraft owner.

The best thing any owner can do to extend the life of his or her battery is to keep it fully charged. The alternator or generator on a plane that is regularly flown helps to keep the battery in a good state of charge.

A plane that sits for extended periods, however, needs an external charging source to keep the battery maintained in good shape and prevent permanent sulfating of the plates. The Achilles’ heel on any battery is to allow it to completely discharge, especially if the discharge occurs slowly over a long period of time.

Battery acid is harmful to the skin and eyes, so rubber gloves and safety glasses should be worn any time you are charging or servicing the battery in your aircraft.

To prevent electric shock, ensure that any metal tool that is in contact with the positive battery terminal is not allowed to touch any metal structure on the battery box or airframe.

Anytime the battery is charged or serviced, the best thing to do is to completely remove it from its compartment.

This can be difficult to do depending on the location of the battery, and all batteries are heavy and can be tough to lift out of the box. The 24-volt batteries are particularly cumbersome.

The straps that are occasionally installed on the tops of the batteries are only there to aid in the removal from and installation into the battery box.

Once it is out of the aircraft, the battery should be supported from underneath; very often the plastic or rope-like straps weaken over time and can easily break.

Taking care of the battery box

The complete removal of a vented battery from the airplane not only makes it easier to service, but also allows the battery box to be cleaned and inspected.

A solution of baking soda and water will neutralize any acid residue in the box.

The drain line should be inspected to be sure it is still attached properly and is clear of any clogs.

Any corrosion should be thoroughly cleaned off, and the box should be painted with either a zinc chromate primer topped by a good quality epoxy paint or with a bituminous or acid proof paint that is specially made for battery boxes. (Battery box modifications for Cessna aircraft are available by STC from
Bogert Aviation. —Ed.)

Most service manuals recommend adding only distilled water to cells that are low on electrolyte after the battery is fully charged.

When adding fluid, a syringe or a bulb-type battery filler works well so that fluid can be removed if too much is added.

Any spills can be cleaned and neutralized with a little baking soda and water, but only do so after the battery caps are reinstalled and tightened. Care should be taken to make sure none of the baking soda enters the battery.

Upon reinstallation, be sure not to overtighten the battery terminals. The terminals on a sealed battery require a relatively low torque, and overtightening can cause them to leak.

External charging of a battery

When using an external charger to charge a battery, it is best to use an
aviation-specific charger. Always
charge the battery to the manufacturer’s specifications.

Teledyne Battery Products, the com-pany that makes Gill batteries, lists four chargers for its various battery products
on its website; these are available through Gill distributors.

The charger recommended by Concorde for use on its batteries is the Battery MINDer brand. This company has aviation-specific float chargers for aircraft batteries that are temperature compensated voltage regulated. These chargers provide a higher charge rate in colder temperatures and a greatly reduced rate of charge as temperature increases, preventing an overcharge.

Once the battery reaches a fully charged state, the charger shuts itself off. Battery MINDer also has some solar powered versions for planes that are parked out on the ramp.

Float chargers are nice and lots of folks permanently install them on the battery. If you do, be sure to use FAA approved components like those available from Audio Authority Corp that are designed for aviation use.

Not designed to last forever

Even with the best care, batteries by design have a fairly short lifespan of usefulness. Periodic replacement is a given—around five years if unmaintained and up to 10 years if properly maintained. When choosing a new battery, pick a high quality product.

With either style, the best thing an owner can do to extend the life of his or her battery is to keep it fully charged. With the improved chargers on the market today, that is becoming easier to do.