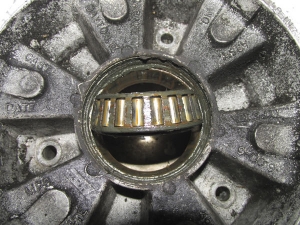 A&P Jacqueline Shipe describes how to service wheel bearings in this article, the second in a DIY series for pilots who wish to take on preventive maintenance of their aircraft.

FAR 43 Appendix A lists the preventive maintenance items owners may legally perform on their planes. This list is fairly long—and some of the items are a little involved for a person to perform the first time by themselves, while other tasks on the list are pretty straightforward.

While cleaning and greasing wheel bearings doesn’t seem like too difficult a task, there are some guidelines that need to be followed. The failure of a wheel bearing can cause major damage to the wheel and can even allow the wheel assembly to slide off the axle.

Wheel bearings are relatively small, but are incredibly strong. They have to support the weight of the plane while allowing the wheel to spin freely in all types of temperatures and conditions. In addition, wheel bearings and races on airplane wheel assemblies also have to be capable of withstanding hard landings and both vertical and horizontal loads without failing.

The bearings on most airplane wheel assemblies are the tapered roller-type. The outer part of the bearing is larger than the inner part, and the rollers are installed at an angle.

The bearing itself rides in a metal cup called a race. The race has a “pressed in” fit in the wheel half, and is tapered on the inside to match the bearing. The biggest advantage of tapered bearings is the high load capacity that they can withstand.

Automotive wheel bearings, on the other hand, usually use spherical rollers (i.e., balls). Ball bearings can withstand prolonged high speeds without building up too much heat, but cannot take high impact loads.

Tapered bearings will bear up under the not-so-good landings that occur from time to time with an aircraft. In addition, proper servicing of these bearings will keep the wheels spinning freely and will last for a long time.

Once a wheel assembly is removed from the axle, the wheel bearings are easily removed by taking out the metal retaining clips that secure the bearings and grease felts.

There is an indention in the outer part of one end of the clip to allow a screwdriver to be used to pry it out. The clips don’t have a lot of tension on them and can be easily removed.

Once the clip is off, the bearing, metal rings and grease felts can all be lifted out together.

Be sure to keep all the rings and clips organized so they can be reinstalled into the same wheel half and in the same place. The metal rings that retain the bearing are sometimes slightly smaller on the outer half than the double rings used on the inner half, and can be easily mixed up.

A small bucket with 100LL Avgas works well to clean the bearings. Swishing the bearing around and spinning it by hand while it is submerged will clean all of the old grease and gunk out.

The metal rings and clips should also be cleaned, but the felt material needs to be set aside; it should not be submersed in anything. There is really no way to clean the felt, anyway—as long as it is still in one piece, it’s good to go. Any grease felt that is torn or missing a section needs to be replaced.

Once all the parts are cleaned, they should be blown out with compressed air (if available) or laid out on paper towels to dry. The parts need to be thoroughly clean and dry before fresh grease is applied.
Inspecting the parts

After the bearings, metal rings and clips are clean and dry, the bearing and race should be inspected for pitting or damage. If the race is smooth and has no corrosion, the bearing is generally corrosion-free as well.

Races that have light surface corrosion can sometimes be smoothed out with a piece of light grit sandpaper (800 to start and 1200 to finish). Deep pits in a race mean replacement is needed.

Discoloration on the bearing or race, such as a rainbow or gold color, can be a sign that these parts have generated excessive amounts of heat, in which case they should be replaced.

The greatest threat to airplane wheel bearings is usually corrosion. Almost all bearings and races will eventually require replacement due to water getting past the grease seals and accumulating in the bearing cavity, causing rust and pitting.

When cleaning a plane, strong degreasers should not be used on wheel assemblies and wheels should never be sprayed with a water hose. The pressurized water will get past the grease seals and ruin the bearings.

Folks that want their wheels clean can wipe them out with a rag that is lightly moistened with a little Gojo original white cream hand cleaner (the non-pumice kind). Then the wheels can be wiped clean with a dry rag.

Wheel bearing replacement is easy, but replacement of the races is a little tough to do without the proper tools.

Because the race has a pressed-in fit in the wheel half, it has to be driven out. This can be accomplished by using either a hammer and punch or a bearing driver tool.

The wheel is made of cast aluminum. When reinstalling the steel race, it is very important that it be driven in straight. If it gets cocked—even a little—the much softer aluminum will be gouged and damaged.

The best tool for the job is a bearing driver, as it allows each blow of the hammer to be applied equally around the circumference of the race.

Once the race is almost near the bottom of its recess, very light blows should be used to seat it in the wheel half. Many mechanics have driven the race in too far and cracked the fairly thin aluminum ring that retains the race.

The wheel should always be thoroughly inspected for any sign of cracking on the front and back sides, whether or not a race is replaced.

Packing the bearings and reinstalling

Once all of the races are installed and the wheel halves are inspected, the bearings are ready to be packed and installed. A high-quality wheel bearing grease that has good water resistance should be used.

The grease has to be pushed up through the bearing until it comes out the top between each roller. If it doesn’t squeeze through each opening, the inside of the bearing will have gaps and inadequate lubrication.

It takes a little while to pack a bearing by hand. There are bearing packers sold in almost any automotive store that make the job a little faster and a little less messy.

Once the bearing is packed, apply a layer of grease to the entire surface of the race to ensure it is covered as well.

The bearing can then be reinstalled along with the correct order of retaining rings and grease felts.

Lastly, reinstall the clip. It is a good idea to make sure the clip is pressed into place all the way around by pushing it outward with a screwdriver.

After all the clips are in, the wheel bearing service is complete.

Jacqueline Shipe grew up in an aviation home; her dad was a flight instructor. She soloed at age 16 and went on to get her CFII and ATP certificate. Shipe also attended Kentucky Tech and obtained an airframe and powerplant license. She has worked as a mechanic for the airlines and on a variety of General Aviation planes. She’s also logged over 5,000 hours of flight instruction time. Send question or comments to .
Read more...