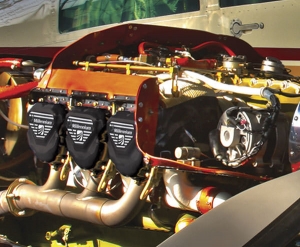 The following is an excerpt from Bill Ross’ new book “Engine Management 101.” Published by Superior Air Parts, Inc.“  Engine Management 101” is a compilation of what Ross has learned during his 35-plus years of experience as a pilot, aircraft owner, piston aircraft engine industry leader and A&P/IA. (To get a free copy of Ross’ book, see the sidebar on page 35. —Ed.)

A major topic of interest for any aircraft owner should be the proper maintenance of their engine’s baffling. I’ve witnessed too many instances where an aircraft owner or their mechanic has installed a $30,000 to $90,000 engine only to use the old deteriorated baffling. Why not spend a little bit more and do all you can to protect that big investment?

In reality, I don’t think it is so much a question of economics but rather a lack of understanding about the functions and performance of an engine’s baffling.

With fuel system calibration being number-one (on fuel-injected Continental engines), neglecting baffling condition is probably the number-two most common maintenance issue I see under the cowling. The fact is, engine baffling that is left in a state of disrepair will likely result in reduced cylinder life and other operational performance issues. 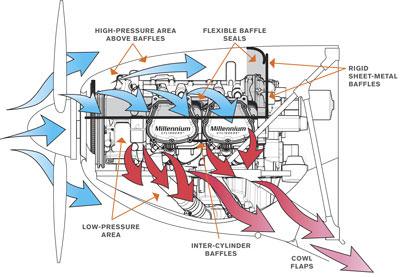 Engine baffling serves a crucial role in cooling the cylinders evenly and keeping the entire engine within specified temperature parameters. Small imperfections or problems in the baffling can result in ill effects to the cylinder and oil temperature.

Some of the detrimental effects can include accelerated wear of cylinder and valve train components, glazing of cylinders, and in some cases, reducing detonation margins to dangerous levels.

Over my many years as an A&P and technical representative, I have assisted in solving cylinder head temperature (CHT) issues many times. In the majority of cases, abnormal CHT is usually not the result of some manufacturing or material defect in the cylinder itself.

In fact, as I cover in many parts of “Engine Management 101,” there are many things that can influence CHT, including fuel system calibration, engine timing, flight profile, climate and most of all, damaged or improperly installed baffling.

I have witnessed many mechanics chase CHT issues by adding fuel on the injection adjustment well above the manufacturer’s recommendations. This is merely placing a bandage on the root of the problem!

Owners and mechanics can be quick to blame the cylinder’s manufacturer, but in my 30-plus years, I have found only a couple of instances where the cylinder was indeed the cause of the problem.

I remember one instance where the owner reported high CHT problems. We assisted in troubleshooting over the phone for several days and were told the baffling was perfect. Finally I traveled to his home airport and when I examined the airplane, I actually found the remnants of a bird’s nest in the baffling. The bird had long ago moved out.

I guess birds don’t like CHTs above 400 degrees either! I just had to ask the mechanic if this was his idea of “good” or “perfect” baffling. He and the owner were ready to remove cylinders, change the fuel pump, etc.—anything but address the actual problem.

Anyway, we cleaned and resealed the baffling and that immediately brought CHT down to normal levels.

The owner was embarrassed and offered to pay all my expenses for the trip. I declined and advised him we would use this time to work with his mechanic. Today—not because of me—this mechanic is one of the best in the industry. I encouraged him to attend many of the recurrent training classes on engines and airframes. While experience is good, training is sometimes better.

Don’t be bumfuzzled by baffling

In order to appreciate the importance of engine baffling, I think we must understand its function and how it works. The accompanying illustration (above) shows how the airflow moves through most General Aviation aircraft cowlings. In the majority of installations, the cooling air flows down through the cylinders and out through the bottom of the cowling.

This airflow is accomplished by creating a confined high-pressure area through the proper placement and installation of the baffling. The higher pressure on top of the engine allows for the air to flow directly to the low-pressure area on the bottom.

The baffling constrains the air so it flows directly around the cylinders. The intercylinder baffling directs cooling air to the vital portions of the cylinder head, and in some cases helps to balance the cooling airflow to eliminate hot spots.

When properly installed, the baffling is designed to create a seal between the upper and lower portions of the engine. It is very important that the rubber pieces of the baffling conform to the engine cowling, allowing no air to escape over or around.

This is why it is vital that all air gaps be sealed properly. The general rule of thumb for most installations is to direct as much cooling air as possible down through the cylinders. The residual heat is carried away through the bottom of the cowling.

For those of you who fly aircraft equipped with cowl flaps, you are able to regulate the amount of air flowing through the cylinders simply by regulating pressure within the cowling.

Check your engine baffling carefully during preflight inspections and make sure your maintenance provider checks it closely during the next 100-hour or annual inspection. You do not have to remove the cowl and do a detailed inspection during preflight; just a quick glance in the cowling will let you know if the baffling is problematic or perhaps folded the wrong way.

You can review with your mechanic how the baffling should look during your preflight inspections. Here are just a few items to look for:

During engine installation, make sure your engine baffling is either in pristine condition or is replaced. This small investment in new or repaired baffling will protect the larger investment you made under the cowling!

For example, I recently overhauled the engine in my father’s Alon Aircoupe and that overhaul included new baffling. Now, thanks to the new powder-coated baffles and rubber seals, the trusty Continental C90 gets lots of cooling-air love.

The attention given by you and your mechanic to ensure your aircraft’s engine baffling is installed and maintained in accordance with manufacturer’s instructions will go a long way in providing cylinder and overall engine longevity.

Bill Ross is a graduate from the University of South Alabama and was employed by Continental Motors for 15 years. As Vice President of Product Support for Superior Air Parts, Ross is committed to the company goal of making flying affordable. When not working at Superior, Ross can be often found flying his family’s 1941 Boeing Stearman, working on antique aircraft or exposing young people to the joys of flight and potential careers in aviation. Send questions or comments to .