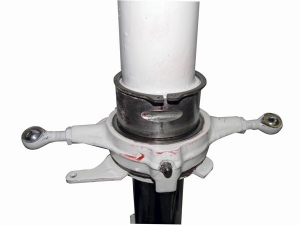 Various things can cause nosegear shimmy. Here’s what to do.

There’s nothing worse than completing a near-perfect landing and rollout only to have a sudden shimmy in the nosegear cause the whole front end of the airplane to vibrate. The shaking can be alarming to pilots who have never experienced it before, and can be worrisome for passengers. The vibration is also very hard on the airplane itself.

A nosewheel shimmy is a rapid back-and-forth oscillation of the steerable part of the nosegear and wheel. It can be caused by a variety of problems, and it sometimes takes more than one trip to the shop to get the issue resolved.

The nosegear has several points at which it pivots and rotates. These pivot points naturally wear over time, and excessive play in any one of them can cause the nose to shimmy.

As the pedals are pushed fore and aft, the collar is swiveled left and right. The bottom of the collar has a lowered keyed section in the front that travels in a slot in the lower section of the strut housing, providing a stop to limit how far the nose can be turned left and right.

A shimmy damper is mounted with its housing attached to the steering collar and its inner rod attached to the upper immovable section of the strut housing. The rod has a fixed piston with an orifice in the center of it.

The shimmy damper is filled with hydraulic fluid on both sides of the piston. As the collar and the attached damper turn left and right, fluid is forced through the orifice to the opposite side of the piston. This provides a slight resistance to turning, and helps eliminate most of the minor oscillations.

The torque links section of the nosegear is made of aluminum castings that attach to the steerable nose collar on the top, and to a fitting on the lower section of the strut. They have pressed-in bushings and inserted bearings that are subject to wear since they have to flex every time the strut extends or compresses.

Potential causes of a nosewheel shimmy

On a plane that develops a nose shimmy, one of the first things to check is the balance and condition of the nose tire itself. An imbalance in the nose tire and wheel assembly can cause a vibration in the nosegear. Uneven tire wear can also cause nose vibrations.

An overly inflated nose tire can also contribute to a nosewheel shimmy. If a shimmy develops soon after a tire was inflated, check the tire pressure and try letting a little air out of the tire.

Overly inflated tires have less tire surface in contact with the pavement. This greatly reduces the friction and the resistance to turning that would naturally be present if the tire pressure was less, making it easier to swing back and forth if the slightest imbalance or wear in the gear is present.

2. An issue in the torque links or steering rods

As the bushings and bearings of the torque links section wear, an excessive side clearance between the link and corresponding attachment on the nose strut casting can develop, allowing a small amount of free play between the upper and lower sections of the strut. This can cause the nose to shimmy.

There are washers or shims of varying thickness that can be installed between the torque links and their corresponding fittings to remove any side-to-side free play.

In addition, misadjusted or excessively worn steering rods can cause a shimmy (as well as pull the nose to the left or right, making taxi operations more difficult).

3. A need for servicing of the nosegear

The shimmy damper itself requires servicing from time to time. A damper that is low on fluid, or is excessively worn internally will most assuredly result in a nose shimmy.

Regularly greasing the collar and scissors with a high-quality grease will help to prevent wear and corrosion. Fresh grease also helps remove a small amount of free play from the steering collar by filling the gaps between the rollers.

Whether you use AeroShell 7, 22 or 33, Mobil 28 or another grease, be sure you continue to use the same kind every time you service the nose gear, because they aren’t compatible with each other. Whatever you start with you want to stick with.

4. A need for additional shim

An airplane that still has a nose shimmy after all the preceding items have been eliminated as culprits may require an additional shim between the steerable nose collar and the strut housing.

Adding a shim is normally one of the last things that folks resort to when trying to fix a shimmy because the entire strut has to be removed from the airplane, but a newly-shimmed collar can often provide the fix for a shimmy problem.

Strut removal is not a particularly complex task, it just requires a little more time than simply balancing a nosewheel, or servicing a shimmy damper.

The first step in the process is to take the weight off the nosewheel so that the strut can be removed.

Next, the nosewheel and pant are removed, and the strut is completely deflated by removing the valve core in the top.

The third step is to remove the large roll pin at the top of the strut assembly.

The roll pin secures the strut assembly to the engine mount on most models, and it can be tough to remove if it’s been a long time since it was last disassembled.

A rivet gun with a flat set along with a block of wood works well for jarring loose stuck pins or seized bolts, and it usually works well on the roll pin.

The wood is placed against the roll pin and the rivet set is seated on the opposite side of the wood. As the trigger is pulled the jarring from the rivet gun generally breaks the pin free, allowing it to be tapped out. The air pressure on the rivet gun should be adjusted to a lower setting and gradually increased as needed.

Once the roll pin is removed, the steering rods are then disconnected from the collar.

There is one last bolt securing the strut at the bottom of the engine mount. Once this is removed, the entire strut assembly (housing and all) can be removed from the plane.

When installing a shim, there is no need to have to remove the lower inner section of the strut from its housing unless the seals are getting a little old or were leaking. However, it is a very convenient time to reseal the strut if there is any doubt about the seals leaking later on.

On the inside of the collar is a continuous roller bearing that rides on the strut housing as it is steered back and forth. It is a good idea to thoroughly clean the bearing with Varsol or mineral spirits using a soft-bristle parts brush. Be sure the bearing is completely dry, and then give it a good coating of fresh grease before reinstallation.

The shims must be installed first, then the collar, and lastly, the snap ring.

The collar should move freely but have virtually no up-and-down movement. The snap ring should be gently tapped all around using a punch to be sure it is properly seated.

A Cessna nosegear has to pivot and rotate, but it shouldn’t shimmy. The cause of the shimmy can sometimes be hard to find, but it’s not impossible to fix. A shimmy-free, well-greased nosegear helps make taxi and landing operations go much more smoothly.