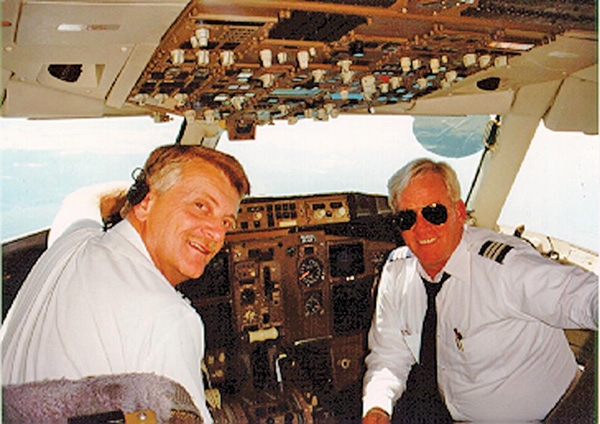 During my 36-year career as an airline pilot, I spent approximately 75 percent of the time as a captain and 25 percent as a copilot. I never flew an airliner as a flight engineer. The airline didn’t have any aircraft that required that extra cockpit person until I was high enough on the seniority list that I didn’t need to consider bidding the F/E seat—I just always wanted to have a steering wheel in front of me.

My initial foray from copilot to the captain’s side of an airliner’s cockpit occurred after a little over four years, beginning with piston-powered airliners that were initially built in the late 1940s. When I upgraded to captain, it was on the 48-passenger Fairchild Hiller FH-227 turboprop, which I generally flew out of New York’s LaGuardia (KLGA) and JFK airports.

After a couple years we elected to have a (pretty stupid, in my opinion) pilots’ strike, which lasted long enough to financially destroy the airline, but we lucked out of that boondoggle by being merged into another airline, where I basically spent the remainder of my airline career. Four more years of copilot, then back to the captain’s seat in a series of airplanes that began with old turboprops and finished with modern widebody jets across the Big Pond.

It was in that final stint of eight years flying the North Atlantic Ocean where I met Scott Reynolds, the best darn copilot that I ever had. I’ve had a number of really top-grade copilots over the years that were all very professional and a joy to have on board (and some pretty horrible ones, too—but that’s a different story). But Scott was exceptional and we simply clicked so well together.

I’m going to skip to the end of the story first, by telling you that Scott Reynolds passed away last July, just short of his 70th birthday. He was a little less than three years younger than me, but he was pages and pages of airline seniority numbers junior to my own seniority number, which is why I sat on the left of the Boeing 767 and he sat on the right.

Scott had worked at a number of other outfits before finally settling with the company that I had the good fortune of spending an entire career with—such are the vagaries of airline flying jobs and seniority lists, as all airline pilots are more than well aware.

Scott’s wife Sharon recently told me the story of when Scott first learned that he was scheduled to fly the Atlantic with me. I had the reputation of being a “tough” captain (I preferred to think of myself as “exacting,” while I knew that a number of the copilots called me something somewhat less benevolent). He told his wife that he was dreading this trip to Frankfurt, Germany, with me, but he needed the trip to fill out his schedule for the month so he kept it.

We met in the International Flight briefing room two hours before departure. Scott later told me that he was impressed that I was interested in all the details of the preflight planning to which a number of the other International captains paid little attention.
As we pored over the details of taking that two-hundred-ton airliner and two-hundred-plus passengers across 3,000 miles of ocean in the middle of the night, we could feel that certain simpatico click between the two of us: Scott was a conscientious and competent fellow who enjoyed working with the details and in-flight possibilities as much as I did.

By the time we had gotten the flight planning done and the airplane ready, it was obvious that this was going to be a good trip for both of us. Scott and I shared a common attitude toward the job, toward the details and toward the responsibilities that both of us periodically found somewhat lacking in some of the others that we worked with. A wonderful professional relationship and a true friendship developed from there.

So here are a couple of Scott Reynolds stories, in no particular order, from the days that he flew on the right of me as an enormously valuable second-in-command as we plied the Atlantic Ocean so many times over the next several years.

Scott was once again my copilot when we flew our airline’s inaugural flight to Rome, Italy. Previous to this, our airline’s world ended abruptly at Germany, so we were headed to another galaxy as far as we were concerned. Without me even needing to ask, Scott had assembled all the data he could lay his hands on for Rome’s airspace and its airport so we could be as little surprised as possible at arrival time. (This is way before the era of the Internet, so digging out data was not the piece of cake that it is today.)
We (including our relief copilot, who occupied the middle seat behind me and Scott) must have had a dozen different charts and routings out to cover any possibilities and, I swear we were prepping for the landing while we were still over France. As we descended into Rome and were being radar vectored for an ILS approach, there were several rainshowers and thunderstorms around that needed to be dealt with.

I was studying the radar and before Scott could answer, I said to him, “Tell him we can’t go direct to the beacon because of that rainshower—tell him we’ll go east, then turn tight back to the beacon.”

Scott used his best sugar-talk to pass on my intentions, to which the controller immediately responded, “Hey, that’s OK, you justa doa the besta you can.”

Welcome to the Eternal City!

For the remainder of our years of flying together, anytime a situation got a little tight for some reason, one or the other of us would simply say, “That’s OK, you justa doa the besta you can.”

Another time, with Scott at the controls, we were westbound back to the U.S. streaking along at a high flight level, “making fuel,” which meant that because of some economy tricks we were using, we were doing better than the computer-planned fuel burn and putting some extra fuel “in our pockets,” as I liked to call it.
Scott was really into the game that day, and was planning a full-court press on fuel savings techniques—which included staying as high as possible as long as possible and then doing an idle power descent to nearly touchdown.

“Scotty, my boy, you’re too optimistic,” I said. “Something will screw this up. You need to leave yourself more margin.”

“Nonsense,” he answered. “I have this wired.”

Sixty seconds later, the controller suddenly announced that he needed us to cross some nearby fix at some low altitude.

I didn’t, of course—a pure guess on my part. But I just smiled and said, “Scotty, my boy, you’ll get the hang of it someday, after you get a little more seasoning.”

On another occasion we had a legitimate emergency partway across the Atlantic. We were eastbound, headed for Madrid, Spain, when—in the middle of the night and about 400 miles out to sea—the two independent flight display navigation computers somehow got themselves electronically linked together and they both locked up, thus instantly failing ALL the navigation displays on both the captain and first officer’s instrument panels. (This is, incidentally, the dramatic basis that I used in my airline/adventure novel “Captain.”)

Scott and I calmly and carefully attempted to do lots of different things to get the navigation displays back, but nothing worked (it later turned out to be a computer software virus wherein hostile zeros and ones collided with each other).

So, we came up with a game plan using the inertial digital readouts of latitude/longitude. We plotted our actual position on the chart every 15 minutes for the rest of the night and made small heading changes to remain right on the course line that we had plotted out during the preflight briefing many hours earlier.

Once we hit Europe (a difficult target to miss; just ask Lindbergh), we went back to old-school techniques and flew a raw ILS display to touchdown. Having a competent copilot you trust is really invaluable during moments like these.

The final Scotty story took place on the ground, back in Rome, a few years later. The relief copilot, Scotty and I had taken a long walk out to dinner and were a good distance from our hotel. As we walked out of the restaurant when the meal was finished, I suggested that we take a taxi back since it was late and we were full of Italian food and had sore feet.

He waved a cab down, and Scott climbed into the front seat with the driver while I sat in the back with the other copilot. Scott said the name of our hotel, then added, “…and step on it, we’re in a hurry.”

Without a word, the cab driver floored the accelerator in the little whatever-it-was we were riding in, and we were off to the races! We were literally driving on sidewalks, passing other cars, going through traffic lights (we learned later that red lights are mere suggestions in Italy), horn blaring as we weaved around everything in front of us.

With a jolt, we pulled up in front of the hotel and came to a stop. The driver turned to Scott and, in a calm voice asked, “Wassa that-a fast enough for ya?”

We shakily got out of the cab and made Scott pay the entire fare!

So, Scotty, my boy, it’s been a helluva ride. Thanks for the good work, and thanks so much for the great memories.

We are all headed westbound for that final flight; some of us a little sooner, some of us a little later. But I do have to say that—just like he did everything else I ever saw him involved in—Scott Reynolds even managed to do the dying part properly: he simply went to bed one night and didn’t wake up the next morning. You can’t do any better than that.

Editor at large Thomas Block has flown more than 30,000 hours since his first hour of dual in 1959. In addition to his 36-year career as a US Airways pilot, he has been an aviation magazine writer since 1969 and a best-selling novelist. Over the past 30 years he has owned more than a dozen personal airplanes of varying types. Send questions or comments to .