It’s been a while since my writing has appeared in these pages—and there’s a sad reason for that. Two days after Christmas, my wife and copilot Kate lost her battle with ovarian cancer.

As full-time caregiver for her last few months, I had no time for flying, much less writing about it. In fact, her last flight—an air tour of our hometown just a few weeks before the end—was with one of our partners rather than me. I simply had no business flying at that point.

One of Kate’s last wishes was for me to get back in the air. I got off the ground for touch-and-goes just three weeks into the New Year, and followed that up with a biennial flight review (BFR) and instrument proficiency check (IPC). I also accepted an offer to join my longtime flight instructor Larry Askew on a trip to Reno, Nev. in the turboprop he flies for a local almond rancher. 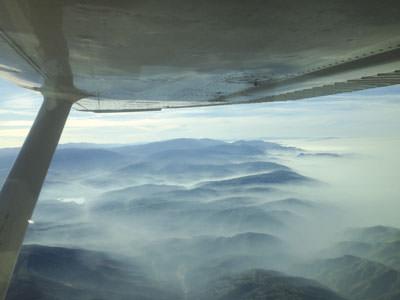 During the BFR, Larry asked me to do a soft-field approach and landing. I hadn’t done one (or thought about it, for that matter) in quite some time and didn’t remember the technique. A short-field approach with full flaps resulted in a less-than-soft landing, so he had me try again.

The second time around I limited myself to 30 degrees of flap and carried a little power to grease the landing. I’m going to make a point of practicing soft-field landings and see if I can’t make my landings consistently good in N4696K.

With the BFR and IPC complete, I felt ready for a trip to the Los Angeles area over the Valentine’s Day weekend to attend an annual meeting of the American Aviation Historical Society (AAHS) and a fund-raising dinner for Mission Doctors Association (MDA).

I also loaded the baggage compartment with unused medical supplies left over from Kate’s in-home hospice care for delivery to Liga International. These supplies can be used at charity clinics in Sinaloa, Mexico.

As a fun break—and helpful distraction—I paid the whopping sum of $99 for a Valentine’s Day ride in a vintage Douglas DC-3.

From a flight planning perspective, the trip involved three legs: first, from my home base at Modesto (KMOD) to Van Nuys, Calif. (KVNY), where I’d rent a car and drive to the AAHS and MDA events; then a repositioning flight from Van Nuys to Long Beach (KLGB) where the DC-3 ride would take place, and where I’d rent another car to deliver the medical supplies and visit an old friend; finally, I’d return from Long Beach to Modesto.

Since I’m instrument rated, my plan was to file all three legs as IFR flight plans—which makes it much easier to get around in Class B airspace. Instead of constantly worrying about whether you are or aren’t in the Class B area, you just follow ATC instructions. And while flying in some of the world’s busiest airspace, I like having a controller help me spot other traffic.

Of course, for any cross-country, the first concern is weather. Fortunately, both the aviation forecast and long-range outlook from Weather Underground showed nothing to worry about other than heavy haze in California’s Central Valley. Once again, my instrument rating pays for itself—heavy haze is pretty much a nonissue when you file IFR.

The flight down was mostly uneventful, although as usual, ATC amended my route—at which point I missed having my trusty copilot Kate to keep the airplane flying while I figured out the amended clearance. (The autopilot helps, but doesn’t have eyes to look out for other airplanes.)

As seems to be common in Southern California, ATC kept me high until I was almost on top of the field and I found myself diving onto the localizer at 1,500 fpm. That’s not a recipe for a stabilized approach, but I managed.

I had a small screwup after leaving the taxiway and entering Signature Aviation’s east ramp: I started to turn down a vehicle road thinking it was a taxiway, but one of their line people caught it and got me pointed the right way before I got too far.

I had a very enjoyable time at the AAHS and MDA events, where I met up with old friends and made new ones. I was up so late Saturday night that on Sunday morning I decided an extra hour’s sleep was more important than flying the airplane from Van Nuys to Long Beach and decided to drive instead, arriving in time for what turned out to be a delightful experience of classic airline aviation.

The particular DC-3 I got to ride in was ordered by TWA for delivery in 1943 as an airliner, but instead was impressed by the Army Air Forces which used it as a C-53 paratroop transport during World War II. It was returned to TWA after the war and converted back to airline configuration, which it retains today.

Passengers—which included about a dozen aviation history buffs—were given a preflight briefing by the crew and asked to stay seated with our belts fastened for engine start, warm up (which took five to 10 minutes), taxi and takeoff.

Once we leveled out at our 1,000 MSL cruise altitude, we were free to get up and come forward—a few at a time—to the flight deck. Like everyone else, I did that, stayed just a minute or two and got out of the way so others could share the experience.

But after a while I noticed that nobody other than the pilots was up front, so I took the opportunity to park in the crew chief’s jump seat until he evicted me as we approached Long Beach on our return.

That was a real treat and very special for me, as my dad was a flight mechanic and crew chief on C-47s, a military version of the DC-3 with a slightly larger cargo door. Kudos to pilot Dan Wotring and his team from Aviator Flight Training based at Cable Airport (KCCB) in Upland, Calif.

All too quickly, the tour came to an end and I spent the rest of the day visiting with MDA folks and revising my flight plan.

With no need to visit Long Beach, I decided to save myself another car rental by flying to Oceanside, between Los Angeles and San Diego. That would be close enough for my friends Jim Forbes and Jacki Hanson to come and meet me—and in Jacki’s case, pick up the medical supplies for Liga. After lunch in Oceanside, I planned to fly home to Modesto.

The weather forecast on Monday included a high wind advisory which worried me a little, particularly crossing the mountains on my way home, but for the leg from Van Nuys to Oceanside (KOKB) I wasn’t concerned—the wind was pretty much straight down the runway for takeoff, and would provide a nice tailwind for the short flight.

I turned in the rental car, settled the bill (Avgas at Signature isn’t cheap, but they do provide excellent service) and had a normal engine start, taxi and runup with no apparent anomalies. Then I got distracted; ATC assigned a departure procedure I wasn’t familiar with, so I found myself in the runup area studying it.

Something in the corner of my eye caught my attention: the JPI engine analyzer in N4696K’s panel was flashing a high oil temperature warning. I looked over at the analog gauge in the panel and confirmed that it was below redline—but too high. CHT looked a little high too, and I confirmed that on the JPI.

I checked to make sure the cowl flaps were open. It was a little warm (the OAT was more than 80 degrees F) and I didn’t have the airplane pointed into the wind.

I called ground control and told them I needed to turn the airplane; did so, retarded the throttle a little and both the oil and CHT came down, so I decided it wasn’t anything to worry about and went back to studying that pesky departure procedure.

When I had the procedure figured out, I called the tower and told them I was ready for takeoff, IFR. The controller said, “Hold for release.” A few minutes later, I was cleared for takeoff.

I taxied onto the numbers, turned into the wind, started to advance the throttle—and the JPI started flashing its warning again. This time, when I looked at the analog gauges I saw something that made me swallow hard: low oil pressure.

I’ve seen that once before, and it is not good news.

I retarded the throttle, told the tower I was aborting the takeoff and taxied back to Signature’s ramp. By now I’d had a chance to look at the CHTs, which were also high—over 400 degrees F.

My first thought was that I’d developed a major oil leak, so as soon as I got off the taxiway and onto the ramp, I shut the engine down and got out to take a look. No sign of a leak, but the dipstick was too hot to touch. One of Signature’s line people helped me push the airplane out of the way.

I wasn’t about to fly the airplane until it was checked out by a mechanic, which wasn’t the easiest thing to arrange on Presidents’ Day, and it took some time to find one. (Thanks again to the folks at Signature who put me in touch with Mike Maisch from Continental Aviation.)

While arrangements were being made to tow the airplane to Maisch’s hangar, I unloaded my bags and all the medical supplies, put them in yet another rental car, and made arrangements by phone to drive them to Jacki’s house in Mission Viejo. I’d have to visit Jim (who lives near Oceanside) another time.

After confirming the engine had oil in it, Maisch’s first move was to remove the filter, cut it open and check visually for signs of metal, which would have indicated an oil pump failure.

Finding none, he recommended checking the oil pressure relief valve, and then running up the engine with a shop pressure gauge attached. That wasn’t going to happen until morning, so I spent an extra night with the MDA folks.

Tuesday morning I drove back to Van Nuys and spent an hour or so reviewing the POH and engine operation guides while Maisch installed the shop gauge, refilled the crankcase and put on a new filter. Then he had me do a quick runup. All appeared normal.

Maisch’s opinion (backed up later by my own mechanics at home) was that most likely a small piece of carbon caused the oil pressure relief valve to stick. That would explain the symptoms I experienced.

I bought lunch while he removed the shop gauge and put the cowling back on, then—at his suggestion—started the engine, called ground control and asked to stay in the pattern to make sure everything was working before departing for home.

It was a clear day with light winds, so I filed a VFR flight plan to Modesto. As you might imagine, I paid close attention to the JPI analyzer and engine instruments throughout the flight—but had no problems at all.