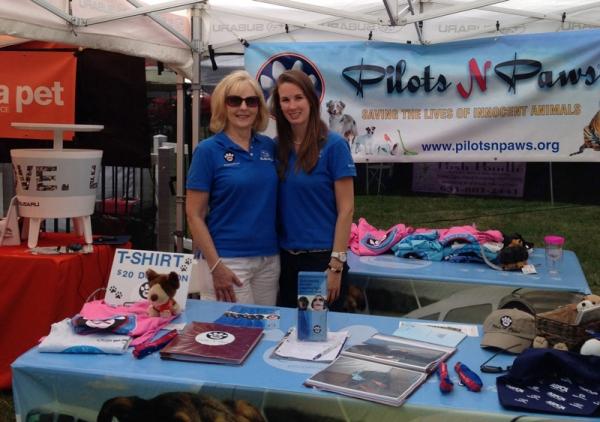 June 2014- Imagine the life of dogs locked helpless in row after row of cages, without any hope or way out. These pets are no longer wanted for a variety of reasons, and there's a 60 to 70 percent chance they'll soon be euthanized—a death sentence they clearly did not deserve.

According to Pilots N Paws president and co-founder Debi Boies of Landrum, S.C., pet overpopulation is a disturbing problem in the United States, and each year more than four million no-longer-wanted pets are euthanized. But to Boies and Pilots N Paws executive director Kathleen Quinn, even one dog that is given new life through relocation and placement in a new forever family is worth the effort.

"When we were first starting out, a common sentiment shared with us from pilots was that they love a good reason to fly—such as finding a great $100 hamburger. But our volunteer pilots quickly find out that sharing the gift of flight with an animal facing an almost certain death is a much more meaningful reason to fly."

If you are a bit staggered by those numbers, you are not alone. Like me, you've probably heard of Pilots N Paws, but had no idea the 501(c)(3) organization was so large. But like most of the stories I've brought to you in this column recently, this successful idea grew from one conversation.
"I had been in Doberman Rescue for several years in South Carolina," Boies said, "and after the loss of my 12-year-old Dobie, I found a rescue Doberman in Florida who needed a home and felt that he would be a perfect addition to my family. The only question was how to move him from Florida to South Carolina?

"My friend Jon Wehrenberg responded and generously offered to fly the Dobie in his Cessna P210. After the transport flight, Jon sent me an email saying we needed to do something more that involved using our airplanes. I quickly agreed, and asked if he thought 'Pilots N Paws' would be an acceptable name. Of course Jon thought the name was perfect."

From that simple beginning, Pilots N Paws has grown in just six years into a very healthy organization, and it's quite an enormous success story... as well it should be. Because when you break down exactly what it is they do, it is a heartwarming, tail-waggin' great story.

"There's really no greater feeling of joy than seeing an animal make it out of a shelter and into the arms of a loving forever home or foster family," Quinn says emphatically.

"It's especially cheerful when kids are involved. It seems everyone's smiling when our pilot lands and places a puppy into the arms of a child. Words can't describe the emotions when you see not only the difference these pilots are making to the animals, but also how they affect the people who are receiving the newest member of their family.

"All of our transports have a strong emotional element. Our pilots are held in the highest regard, and 'hero' is a title used often to describe them!"
One of the most enjoyable things we can do with our flying machines is give back. As Boies explains, since pilots are always looking for a reason to fly, it is the job of Pilots N Paws to reach out and give them one of the best reasons in existence: that of saving a life.

Pilots N Paws quickly earned some notable national recognition which sparked its impressive growth. "Our biggest obstacle initially was letting General Aviation pilots know we existed," Boies said. "Once a few pilots were able to feel the exhilaration that comes from flying pet rescues, they began posting in chat groups and forums, recruiting their friends.

"Media coverage soon followed, including the support of AOPA and other pilot-oriented groups, and our corporate sponsors, Subaru and Petmate, assisted us in getting the word out.

"We were also fortunate the first year to be featured on an NBC Nightly News "Making a Difference" segment, and we were inundated with inquiries. It truly did make a difference for us—and more importantly, for the animals we help."

Pilots N Paws also receives offers of donated booth space for many aviation events. When that happens, volunteers are dispatched to the events to share information with the flying public. Similarly, many Pilots N Paws pilots speak at pilot club meetings, handing out literature about the program to potential new recruits.

And of course, I could not leave you without one story to tug at your heartstrings. "Our pilots are very giving of their time and resources to transport animals out of shelters," Quinn says, "but it's also important to note that they come to the aid of our veterans as well.

"This past winter, Pilots N Paws pilots came together to unite two Afghanistan war veterans. Inca is a Belgian Shepherd that served as a military working dog, and upon her retirement, Joe Bane, her handler overseas, was desperate to adopt her. The two risked their lives for our country while serving together, and it became our mission to reunite them.

"Our pilots played a pivotal role in bringing Inca to her new home with Joe, and since the flight, Joe has told us that they're inseparable. I don't think there was a dry eye at the airport when that Pilots N Paws plane landed. This was a beautiful fresh start to a friendship that began four years ago, and we're so happy that Inca gets to live out her retirement in a loving home."

Because of its 501(c)(3) charitable tax status, Pilots N Paws' motto of "make your next flight tax deductible" encourages pilots to ask their accountants if they can use portions of their flight expenses as a tax deductible donation.

"Pilots N Paws is also launching a children's' educational program which includes a new book titled 'Radar's Dream.' It is our hope," Boies said, "that by reaching children early, they will learn about pet responsibility and become interested in aviation as well."

Have you saved an animal's life lately? Circle back to the beginning of this column, and imagine the good you can do with your airplane right now, helping to rescue dogs, cats and even reptiles, brightening the lives of kids and new families.

After a stay of execution and an exciting aerial journey , a little furball—with your help—will land wheels-down into the waiting arms of a new forever family, ready to begin bonding and giving each other new life.