The Planes Bring us Together; The People Keep Us Coming Back 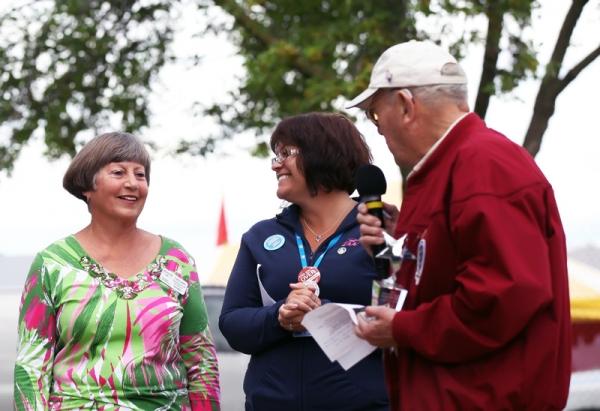 July 2014- Each summer, the aviation family makes the pilgrimage to the shores of Lake Winnebago. They come to a city that for 51 weeks of the year is a near-perfect example of Middle America, full of friendly people, all ready to welcome you into their homes.

This is of course, Oshkosh, a place with three distinct seasons. First are the months of work to bring Wittman Regional Airport (KOSH) out of hibernation and get it ready for EAA AirVenture Oshkosh. This is followed by the actual show week of AirVenture, and then as the leaves fall and the air begins to chill, the show grounds are secured to withstand the harsh winter.
It is a gigantic effort that takes about 140,000 hours, all performed with tremendous pride by a volunteer team unrivaled by any other in General Aviation.

EAA's volunteers are legendary, and their tireless work is on full display during one glorious week at AirVenture Oshkosh. The show is a well-planned, brilliantly choreographed festival, trade show, air circus and family reunion. For those of us who come to Oshkosh one week a year, it all looks perfectly set up as we pass under that Brown Arch. Everything is in its place.
This is not just a big event, it is more like a small city that seems to rise miraculously from the previously-frozen tundra to welcome the aviation world in for some of that genuine Wisconsin hospitality.
But while it does sometimes seem like a miracle to bring this show to life, in fact it is because of the work of the 5,000 EAA men, women and children that devote a substantial portion of their lives to giving back by helping in some capacity to mount this show. In Oshkosh, people work hard, and after several generations, volunteering for EAA can get hard-wired into their DNA.

When you ask Janine Diana, EAA's VP of People & Culture—a lucky woman who calls it a pleasure to oversee the association's volunteers and staff on a daily basis—she will tell you straight away that it's these volunteers that make AirVenture Oshkosh happen and keep EAA alive and well around the country.
"EAA has grown to what it is today out of the dedication of the EAA volunteers," Diana explained. "Thousands of individuals who serve to make a difference in General Aviation; who are out in the fields carrying on the mission of EAA, or supporting the magic of creating the World's Greatest Aviation Celebration in Oshkosh, they make a difference."

Annually, EAA logged almost 170,000 hours for volunteers at EAA Headquarters or AirVenture during Fiscal Year 2014 (March 1, 2013 to Feb. 28, 2014) and that substantial number does not include the thousands of chapter members across the nation volunteering their time to serve the needs of EAA and General Aviation.
Diana also tells us that the late founder of EAA, Paul Poberenzy, knew the importance of the people involved in EAA and how they are in fact the glue that holds the association together. "Paul taught us a simple principle: that the planes brought us together but the people the volunteers met kept them coming back.

"The magic of AirVenture Oshkosh is often described as the annual family reunion you can't miss. Around here, everyone pitches in, from grounds and facility support to parking airplanes, planning meals, construction, even driving trams. Some people prepare our B-17 for the season, others are docents at the EAA Museum."
Whatever these volunteers do, they do it for the same reason—to serve the aviation family, as if we were in fact "family" because, well, we ARE. It's the volunteerism aspect of EAA membership that to many seems like the most important element of association membership. Pilots helping pilots has always been the very foundation of the aviation world; my beer is your beer.

But in EAA, members take this concept to astonishing heights, and especially in Oshkosh, the work that goes into AirVenture proves this point every summer.
One person who has seen these volunteers work firsthand for decades is EAA Emeritus Director Tom Poberezny, who was also the chairman of the annual EAA Fly-In and Convention from 1977 to 2011. "Sometimes people think that with volunteers, you will not get work of the same quality as an employee would provide," Poberezny says, "but in fact I have found the opposite to be true.
"If you take good people who are volunteering for an organization and give them the latitude, incentive and authority to excel, they will perform very high quality work because they want to do it, not because they are paid to do it. Their pay is being involved with something successful like Oshkosh."

Poberezny points to one recent convention where the abilities of everyone working for EAA in volunteer or paid capacities was put to the test. "Over the years we have had about 5,000 volunteers help with the convention each summer," he said. "The work these people do is incredible, an amazing, almost magical formula that cannot be put into words.
"The best example I can remember is the convention in 2010 when it was so rainy, we couldn't park airplanes in the North 40, and Camp Scholler was underwater. Behind the scenes, thousands of volunteers and EAA staff were making split-second decisions on the fly so the logistics of it all would work to keep the convention on track. It was an incredible achievement."
From a very young age, children in EAA families are introduced to the concept of volunteerism, a wonderful virtue that is passed down from one generation to the next. And nowhere is this "one family, the aviation family" idea more profound than in the Schaick family, where giving back to EAA seems to be hard-wired in their souls.

There has been Schaicks working at EAA's summer convention for nearly as long as the event has been in existence. Kristin Schaick explains that in their family, volunteering for EAA is just what you do.
"Our family has been involved since the late 1960s," Kristin said. "Our grandfather, Will Schaick, and our dad, Scott Schaick, started by selling patches and decals at the gates for the annual fly-in convention. My grandfather worked with two other men to found Flightline Operations, to develop and execute a plan to park over 100 airplanes an hour, and in 1987, the Will Schaick Flight Line Operations Building was constructed."
Kristin summed up the family's involvement this way: "We have created long-lasting relationships with so many people that we sometimes only see once a year. Our love for aircraft, flying and the overall culture of the organization is what keeps us coming back. I believe strongly that it is important for children to see and experience AirVenture from a young age. My brother and I have been to every AirVenture since we were born."

Soon, hundreds of thousands of lucky attendees will step through those gates, on to ground some in our community say should be cherished. It is hard to dispute that claim. As the scent of grilled brats welcomes them and large formations of warbirds fly overhead, we should remember just who is responsible for all of it.
Without the efforts of these humble, proud and loyal EAA volunteers, EAA AirVenture Oshkosh would simply not exist. So when you come to the party this summer, make sure to find a few of these great people, walk up, shake their hand and tell them you appreciate their hard work.

Tweet
More in this category: « Imagine the Good Restoration Heaven »
Login to post comments
back to top