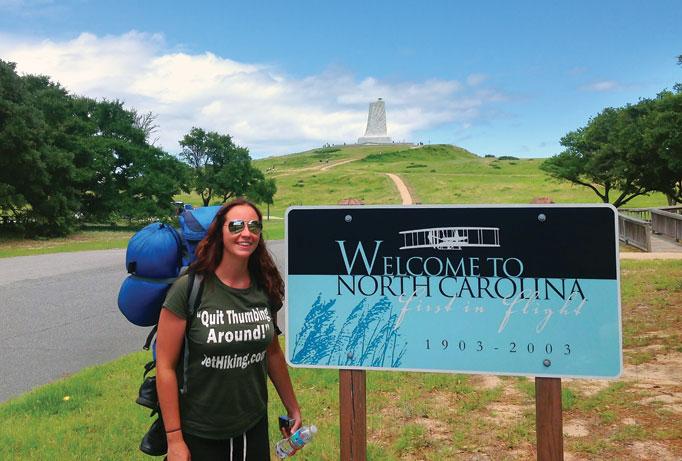 September 2014- If there is one constant that runs through the souls of all aviators and aviation enthusiasts, it's that we love to talk about flying any chance we get. Of course, much of that talk is out at the airport with others in the aviation family.
We all strive to engage the non-flying public and tell them all the great things about flying private airplanes. To get their attention, though, we need to be creative. We have to find innovative ways to stand out so we can have the opportunity to give anyone who will listen our "elevator speech" about our wonderful GA world.

If you want to find someone who has created a fun way to engage the non-flying public, look no further than Amber Nolan, a.k.a. the "JetHiking Gypsy."
Since July 2012, Nolan, a Florida-based travel writer, has been catching rides in propeller planes and jets—hence the name JetHiking—to see the United States, speak to anyone she meets about aviation, and write about it along the way. Her journey so far has taken Nolan to 42 of the 50 states, and has produced enormous opportunities to advocate on GA's behalf.

"I started this project in search of adventure," Nolan said. "As a writer, I've hopped on countless commercial flights that were only a means to get to a destination.
"This project is different than those flights. JetHiking is all about the journey, the spontaneity, and the fun of flying—often with no particular goal other than to enjoy the flight. It's about experiencing the United States from a different point of view, relying on the kindness of strangers, and seeing where I'll find myself when the runway ends.

"I hope it encourages other people to get out there and find their own adventure—whether in flying, traveling or another passion," she said.
The original intent of Nolan's JetHiking project was not advocacy, it was just to have fun. But that changed not long after she set out to see what she could see.
"As a travel writer, I had been all over the world, but hadn't seen much in my own backyard. I decided that I wanted to take some time to experience the U.S., but wanted to do it differently. I thought that hitchhiking on prop planes and private jets could be a fun way to see the country.
"I bought a domain to document the jour

ney, started researching online and going to local airports. However, I wasn't making much progress," Nolan said.
"And then I spoke with Ryan Flanigan, a pilot in the Rochester, N.Y. area. I had posted on one of the forums about my idea and he encouraged me to do it. He told me about the wonderful community I would meet in General Aviation, and how my trip could encourage people to get involved.

"He told me about some of the struggles that aviation faced, and we agreed that the project could help shed some light on misconceptions and show a side of aviation many people aren't aware of. He took me up for a flight, and then connected me with some friends so I could get started.

"More importantly, it became less of something I wanted to do, and more of something I needed to do."
Nolan's JetHiking adventure is not unlike some trips taken back in the day when it was still safe to thumb your way across America with only a backpack and a dream. As the JetHiking Gypsy, Amber Nolan is free to explore whatever is down the next Victor Airway—and oh, what a long, strange trip it's been.

"I've met a circus worker and a voodoo priestess," Nolan said. "I've also met air race pilots; Team AeroDynamix ["the world's largest airshow team"]; an ex-FBI agent; a guy riding his motorcycle from Argentina to Alaska—and back; someone riding their scooter across the country; a pilot trying to develop a natural-gas airplane; a woman who refused to sell her plane throughout her cancer treatments because it got her through; a mother struggling with the recent loss of her son in a snowboarding accident; a couple (and their dog) sailing up and down the East Coast; a hippie pilot with hilarious stories about flying in Australia; a train hopper; a woman with an alien watchtower; and a man with an alligator farm in Colorado."
There have been highlights along the way, both in the air and on the ground. "Flying up the Hudson River right next to the Manhattan skyline in the Globe Swift with the top down," Nolan recalls, "that was great!"
"Also, flying over the Golden Gate Bridge, doing barrel rolls on the way to Georgia... and taking the controls, anywhere, anytime."

On the ground, Nolan has hiked Glacier National Park, camped at grass strips, and seen the Grand Canyon. She's been to a Texas dance hall, attended both EAA AirVenture and Sun 'n Fun, stayed at a plantation home near Baton Rouge, La., went to the Iowa State Fair, saw a bluegrass concert in West Virginia, visited the Liberty Bell in Philadelphia, almost had her tent wash away on a beach on Jekyll Island, and was stuck at a farmhouse after an irrigation system covered a grass runway. (She made the best of the grounding by learning how to properly eat Maryland blue crab.)

Yes, Nolan sure has had a blast, no question about it. But along the way, she's been a one-woman publicity machine for aviation, and has been very successful in telling our story.
"I hope that [my project] can renew the general public's interest in aviation and, in particular, have them see a different side of it," she said. "I want to explain General Aviation from my perspective: as an outsider who has been welcomed with open arms by the community. I hope the public can see that being a part of it—whether as a pilot or an enthusiast—is not beyond their reach.
"Even though the name JetHiking might catch their attention, they soon realize that it's not all about expensive jets and it's not impossible for the average person to become involved. It can help people to remember the 'roots' of aviation and realize that the adventurous side is still alive."

As a GA advocate, Nolan has done interviews with college newspapers, adventure travel magazines, local news networks, major newspapers and websites, and numerous international publications. Her email box is constantly getting requests, and she almost always does some sort of interview in the towns where she lands.
"I emphasize that with this project, it isn't just about getting from point A to B," Nolan explained. "In General Aviation, the journey is half the fun—[and] sometimes it takes reporters a minute to register that flying can be fun. I tell them stories about the friendliness of the community, how I am learning to fly along the way, camping out at grass strips, flying over areas that would be next to impossible to visit otherwise, and how sometimes GA flying is just about heading off to find whatever little airport is rumored to have a great mom-and-pop restaurant and lower fuel prices."

Other than a discovery flight, Nolan doesn't have any official hours through a flight school, but she's been learning to fly throughout the trip, if only by osmosis. She does, however, plan on getting her pilot's license when she finishes her 50-state journey.
With such a stellar record of talking up aviation, you can be assured that when the day comes and Amber Nolan passes that checkride, she'll be welcome in the sky over any state in the land, and will instantly be everyone's best friend at any airport she chooses to fly into.